It’s nearly the anniversary of that time the Jets flew a legendary Packers quarterback to Cleveland and crammed him into a small interview room at the Browns’ stadium before a preseason game to introduce him as their next quarterback.

That marriage worked until it didn’t. The Jets started the 2008 season 8-3, Favre suffered an injury (but played through it), they lost four of their last five games and Coach Eric Mangini was fired. The Packers wanted to trade Favre — the Jets only had to give up a Conditional fourth-round pick for the 39-year-old — because of who they had waiting in the wings:

Fifteen years later, and here we are, a legendary 39-year-old Packers quarterback (Rodgers, four MVPs, a Super Bowl and 10 Pro Bowl selections later) possibly on his way out to make way for a young quarterback waiting in the wings (Jordan Love) … with the Jets on line one.

Rodgers has said he hasn’t made any decisions about whether he’ll even play in 2023 — or if he wants that to be in Green Bay — but as the Jets Desperately seek an upgrade at quarterback, expect them to be involved in any trade discussions if the Packers do seriously consider moving him.

“All the trade stuff is conjecture until I decide what I want to do moving forward for myself,” Rodgers said on “The Pat McAfee Show” on Tuesday.

But if Rodgers does keep playing and becomes available? Expect the Jets to be in heavy pursuit. What would that look like?

Here’s everything to consider with Rodgers and the Jets.

Would the Packers actually trade him?

The Athletic‘s Matt Schneidman, who covers the Packers, wrote this about Rodgers on Tuesday: It seems as if the Packers still believe Rodgers gives them the best chance to win right now. Whether that’s more an endorsement of Rodgers or an indictment of Love remains unknown. Whatever cap hell the Packers find themselves in down the road will be worth it if they win a second Super Bowl with Rodgers.

Rodgers, though, sounded prepared for the possibility of playing for another team when he spoke to McAfee on Tuesday.

“If they feel like it was in the best interests of the team to move forward, so be it,” he said. “Again, that wouldn’t offend me, and it wouldn’t make me feel like a victim. I wouldn’t have any animosity towards the team. I love the organization, I love the city, I love the region. … I have a lot of love for what’s gone on in Green Bay. And I’d love to finish there, I would. I might have finished there. Who knows?”

Even at 39, coming off his worst season in a while, Rodgers would likely still net a significant trade return. Plus, the Packers could get out of enough of the $110 million remaining on the extension they signed last offseason to have some financial breathing room while Rolling with a quarterback (Love) still on his Rookie contract.

Packers mailbag: Should they go with Aaron Rodgers or Jordan Love? Why no coaching changes?

What would it take to get Rodgers?

Here’s the return on some recent notable quarterback trades:

Based on that criteria, it would be surprising if Rodgers were traded for anything less than multiple first-round picks, and probably more. Any acquiring team would be smart, though, to attach conditions to the trade in the event that Rodgers retired after 2023.

Would the Jets be willing to trade that much? By all accounts, owner Woody Johnson is willing to do whatever it takes to upgrade at quarterback and get the Jets back to the playoffs. The idea of ​​Rodgers in a Jets uniform — and what that would do for ticket sales — has piqued Johnson’s interest.

Rodgers has a Complicated contract — Over the Cap has a helpful explainer on it — but the part that matters for the Jets is that any trade would likely come post-June 1 (to save Green Bay money) and that they’d likely be inheriting initial cap hits of $15.8 million in 2023 and $32.5 million in 2024.

OTC projects the Jets to be over the cap, although they can quickly get under it by restructuring contracts (CJ Mosley, John Franklin-Myers) and/or cutting players for savings (Corey Davis, Carl Lawson, Braxton Berrios, Jordan Whitehead).

How much does Rodgers actually have left in the tank?

In a win-and-in Week 18 game against the Lions, who had one of the worst passing defenses this season, Rodgers mustered only 205 yards and one touchdown. The Packers lost 20-16, finishing the season 8-9.

He also dealt with a broken thumb and injuries to his ribs and knee during the season. 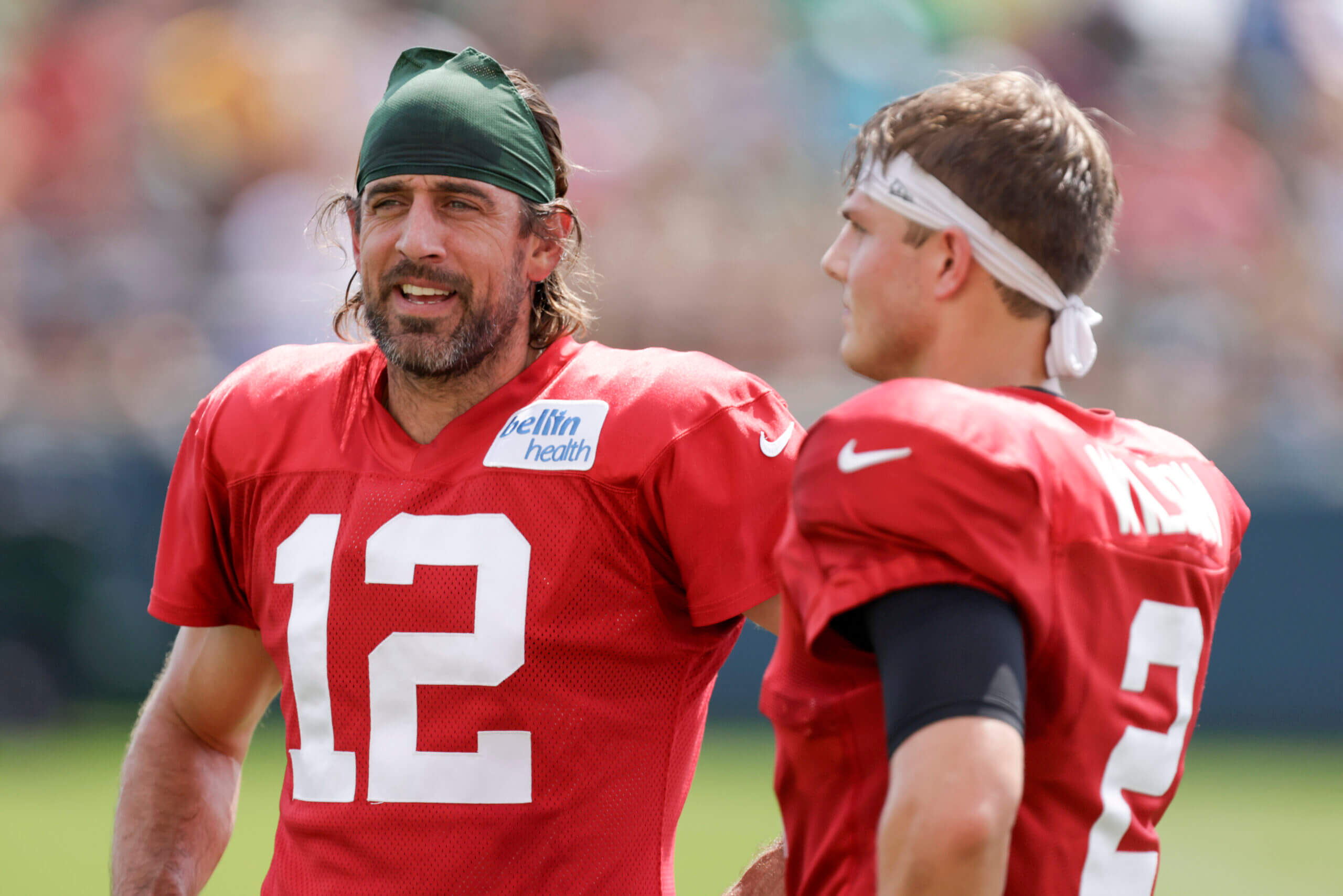 Aaron Rodgers and Zach Wilson were able to chat when the Jets and Packers held joint practices in 2021. (Matt Ludtke / Associated Press)

Why Rodgers makes sense for the Jets

The Jets feel like they’re a quarterback — and revamped Offensive line — away from contention. And Rodgers, even if he’s on the decline, would be better than any quarterback the Jets have employed in a long time. His star power is great enough for him to potentially attract other players to join the Jets, too.

Rodgers also has a close relationship with Zach Wilson. Wilson sitting back and learning from Rodgers for a year or two — if the Jets don’t move on from him this offseason, that is — wouldn’t be the worst thing.

Wilson is “super talented,” Rodgers told McAfee. “I think a little humility is good for all of us at various times in our careers. … I hope that whoever they decide to go with at Coordinator can work with him and break down a lot of Fundamentals for him and get him playing on time. I think he’s talented enough to have a long career in the league.”

Would Rodgers actually want to come to the Jets?

If Rodgers becomes available, the Jets have every intention of getting involved in those discussions. Rodgers doesn’t have a no-trade clause, but, to a degree, he’ll likely be able to dictate where he ends up.

“You want to be part of a team that’s going to win a championship,” Rodgers said Tuesday.

Does Rodgers view the Jets as Super Bowl contenders? There is certainly some appeal. The Jets have a legitimate No. 1 wide receiver (Garrett Wilson), one of the NFL’s best defenses and an impressive young core of Talent — with an owner willing to spend to upgrade the roster.

But there are also plenty of cracks in the armor Rodgers might notice if he looks closely.

The Offensive line, which was a mess by the end of 2022, might need to be completely reworked. The only Locks to return as starters are Laken Tomlinson and Alijah Vera-Tucker.

Rodgers highlighted Garrett Wilson and running back Breece Hall when talking about Zach Wilson — but Hall will be coming off an ACL injury in the fall and likely won’t look like the same player right away. The other wide receivers expected to return (Elijah Moore, Denzel Mims) just had lackluster seasons. And on defense, the Jets have holes at linebacker and safety, and might have to part ways with Lawson or Mosley for cap reasons.

Plus, the Jets are having trouble hiring an Offensive Coordinator to replace Mike LaFleur. Saleh has a long list of candidates he’s already spoken to or plans to, but no one appears to be a front-runner. There is a belief around the league that any team that hires Nathaniel Hackett would have a better shot at getting Rodgers because of their close relationship. The Jets interviewed Hackett for the job, and he’s worked with Saleh before, although it’s unclear if he intends to return to coaching so soon after his disastrous 15-game tenure as head coach of the Broncos. Hackett was previously the Packers’ offensive coordinator.

It also doesn’t help if there’s a perception that Saleh and his staff could be fired if the Jets don’t make the Playoffs in 2023.

The Jets’ best hope for getting Rodgers is putting together an appealing Offensive staff, fixing the Offensive line and cultivating a roster that gives Rodgers reason to commit to the team for at least one year, but ideally more than one.

It’s also possible the Jets will decide it’s too risky to wait out the Rodgers situation. They could instead pursue Raiders quarterback Derek Carr, whom they could acquire as soon as the Super Bowl ends.

Other competition for Rodgers

Another factor: The Jets likely wouldn’t be the only team with eyes for Rodgers. ESPN reported that the Packers wouldn’t be willing to trade him within the NFC.

If that’s true, these teams might make sense as candidates for Rodgers:

• Raiders: A reunion with wide receiver Davante Adams.
• Dolphins: The best supporting cast on this list.
• Patriots: Not a better overall roster than the Jets, but they do have Bill Belichick, a top-level defense and better Offensive line.
• Titans: Derrick Henry, good coaching and a solid defense — although a severe lack of pass-catchers.
• Colts: A team in disarray, but they do have some pieces on offense and defense.
• Ravens: If they moved on from Lamar Jackson.

If the Packers did trade within the NFC, the Giants, Buccaneers, Saints, Panthers and 49ers all make varying degrees of sense as potential destinations.