Florida’s Week 4 update to the two-deep roster had some major surprises, but it’s mostly good news for the Gators as they prepare to take on No. 11 Tennessee.

UF will go with Desmond Watson as the starting nose tackle this week instead of Jalen Lee. Watson had a breakout game last week and recorded his first tackle for a loss as a Gator. At 6-foot-5-inches tall and 415 pounds, Watson requires extra attention from the Offensive line, and that should free up other members of the front seven.

The other main updates come from the injury report at the bottom of the depth chart. While backup quarterback Jack Miller III remains out with a thumb injury, Florida could be getting a pair of playmakers back this week. Cornerback Jaydon Hill, who hasn’t played in a game since the 2020 season, is listed as probable, and linebacker Ventrell Miller should be a game-time decision after moving from “out” to “questionable.” 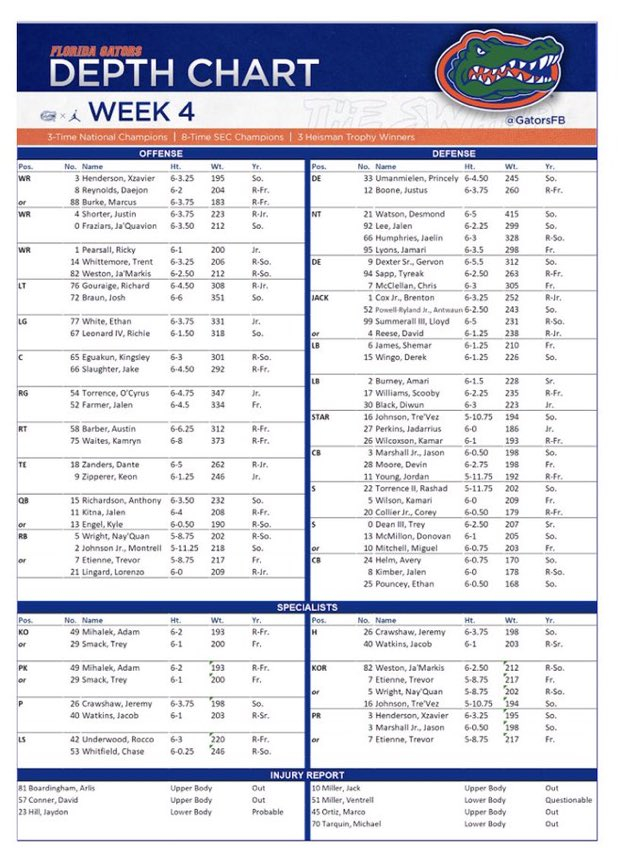 The defense really struggled without Miller last week, so getting him back would be huge from a leadership standpoint. Freshman Shemar James is still getting the start in Miller’s place, and this will be his first road game at the Collegiate level. If Miller returns, Florida stands a much better chance against Tennessee on Saturday.

Hill’s return is more certain. He’s been out for over a year and recently returned to practice. Don’t expect him to be in for the majority of the game, but he should get some snaps under his belt at some point.

Let us know your thoughts and comment on this story below. Join the conversation today!