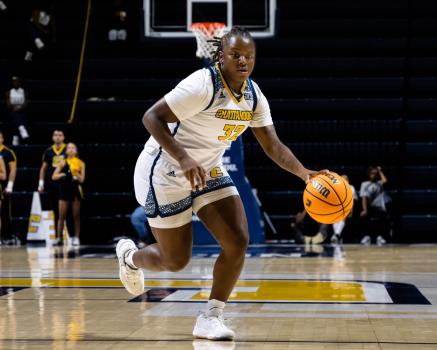 After a pair of career games last week, Chattanooga freshman Raven Thompson to a pair of awards for her effort. She was named the Women’s Basketball Player of the Week by the Southern Conference and the Tennessee Sports Writers Associations.

Chattanooga posted wins on the road at UNC Asheville on Wednesday afternoon and King University at home on Saturday.

Thompson led the Mocs in their win against the Bulldogs with her first double-double at UTC, scoring 20 points and grabbing 12 rebounds, both career highs.

She had nine rebounds off the offensive glass.

Three days later, the Atlanta, Ga., native snared a new career-best 16 boards while just missing a double-double with nine points, in the Mocs win over King at the Roundhouse.

She averaged 14.5 points and 14 rebounds per game last week. She had two assists and three steals against the Tornado and was 6-of-7 from the free throw line at UNCA. Thompson shot 50 percent for the week from the floor and was 1-of-2 from the 3-point line.

The Mocs will begin a six-game road stretch over the next three weeks with a Wednesday night matchup at Georgia State. The game tips off at 6:30 pm in Atlanta. Follow all the action online at GoMocs.com.