Seven US riders have made the journey to Badminton Horse Trials, presented by Mars Equestrian this year, so how have they fared in the dressage? Horse & Hound has caught up with each of them to find out how they are feeling about their performance and scores, plus the challenge that is facing them on Saturday.

Tamie impressed on her first time in the Badminton Horse Trials dressage arena, piloting Alexandra Ahearn, Ellen Ahearn and Eric Markell’s Mai Baum to a top-10 finish at the end of the phase and the best score of the US riders. The pair’s strong scores were marred only by a pop into the canter in the left half-pass.

“I was pleased with everything. We could have gone a bit more forward, but when I asked for that, he cantered, so I played it safe after that, ”she said. “He’s never made me nervous going into dressage before and yesterday I was slightly like, ‘This isn’t quite what I’m used to’, but he’s never been this fit and ready to go.”

Experienced rider Phillip put in the second best performance of the US riders in the Badminton Horse Trials dressage. Phillip and Z, owned by the rider’s wife Evie, Ann Jones, Suzanne Lacy, Caroline Moran, Thomas Tierney, David & Patricia Vos, hold xxth place. Their test was generally consistent aside from a couple of mistakes in the flying changes.

Phillip explained Z had been wound up by the grassroots championship cross-country on Wednesday.

“I’m pleased with where we’re at because with the cross-country going, he was all confused and was pretty wound up so that’s carried over a bit to today,” he said after his test on Thursday. “So I was just trying to sit there and keep him as quiet as I could, so it could be a lot worse. In hindsight, I wish I’d found him a better place to work him yesterday.

“At home he’s really quiet, but at shows he can be a bit of handful. Lately he’s figured out to be quiet in the dressage and I don’t mind so much if he’s wound up on cross-country day – that’s why it got a bit confusing for him.

“He saw all the horses galloping around and came out of the stall shaking in anticipation because I thought he was going across the country. I worked him a lot and tried to get through to him that he doesn’t have to worry about cross-country yet. “ 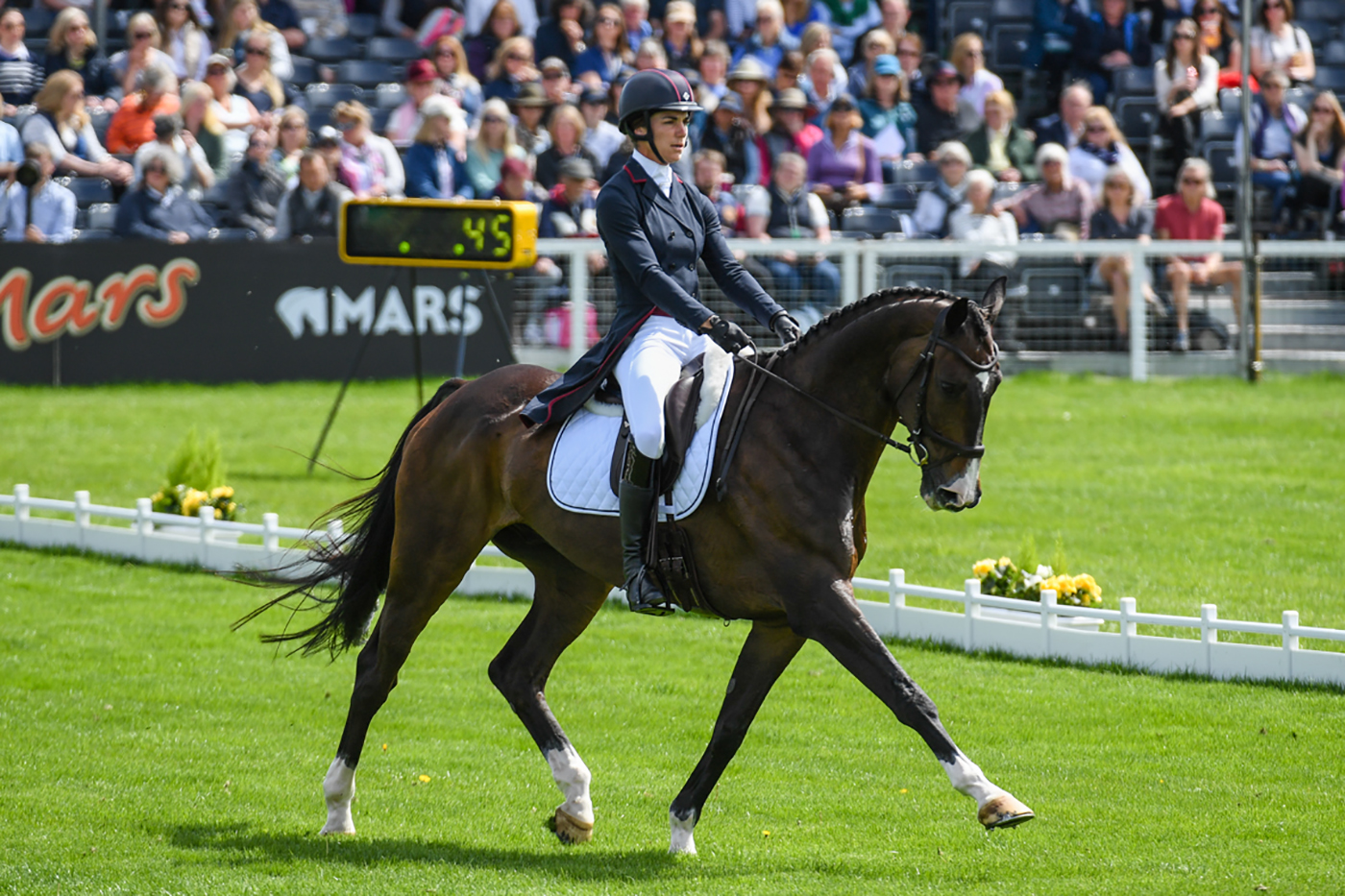 Ariel, who is a first-timer here, had a disappointing time when Anne Eldridge’s Leamore Master Plan showed tension in the arena, which came out particularly in an edgy walk and a short, choppy canter, although they did score some good marks in the trot.

“It’s not what I was hoping for,” said Ariel, who scored 33.8 at Luhmühlen last year. “He’s been getting better at the dressage each time at five-star, but it’s not his strength. He gets excited and tense.

“He’s been keyed up this week and felt the atmosphere. He’s pretty keen. The horses haven’t had a lot of opportunity to see crowds the past couple of years. It’s his first time in front of a crowd this year so it’s a mental game for both of us. “ 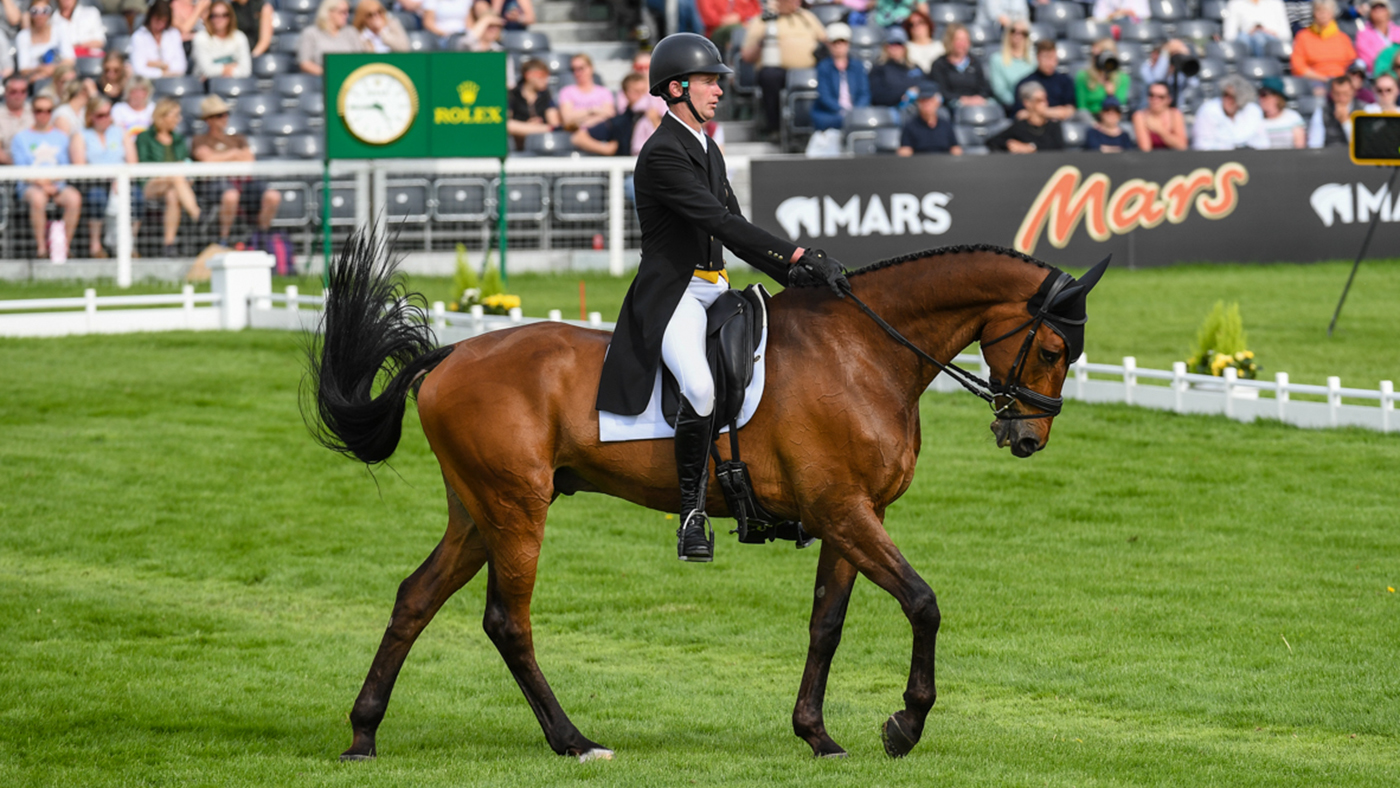 Matthew and Wizzerd, who belong to A Patrick and Kathleen Flynn and Merry Go Round Farm, started off well with a nine from Seppo Laine at H for their entry, but the marks dropped down later in the test, particularly in the right trot shoulder- in the flying changes. Badminton first-timer Matthew said you always hope for better, but he was happy with the horse. 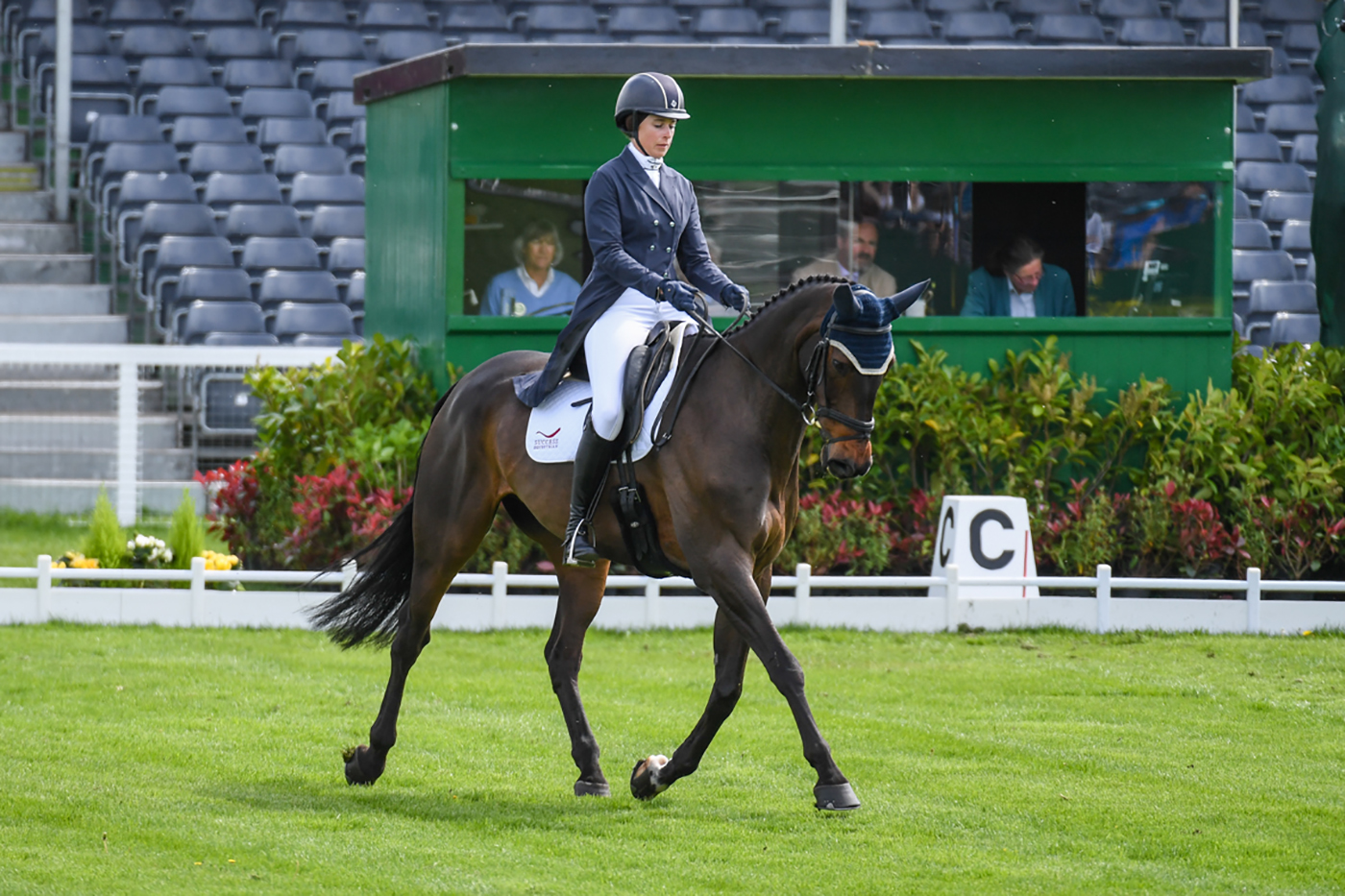 Badminton debutant Lillian said her own LCC Barnaby was tense, but she stayed relatively rideable. The pair came in with 37.8 to lie xxth after the first phase.

“This is not his phase, I will admit – I went in there and got the feeling he was going to blow his top,” Lillian said. “I’ve never felt him that tense and still ride that sort of ok a test. I know everybody’s got their own standard – I brought a jumping horse, not a dressage one.

“The dressage is hard for him. He’s really long and it’s made him nervous because it’s physically hard for him. I’ve been riding him 10 years, this is our 10th five-star, I know him well.

He’s 16 – when they’re 16, they are what they are. If I come in here thinking I’m going to lay it down on the flat, that’s not fair to him. I’ve got to accept who he is. I do expect him to lay it down in the jumping so we’re going to go out there with some expectations. “ 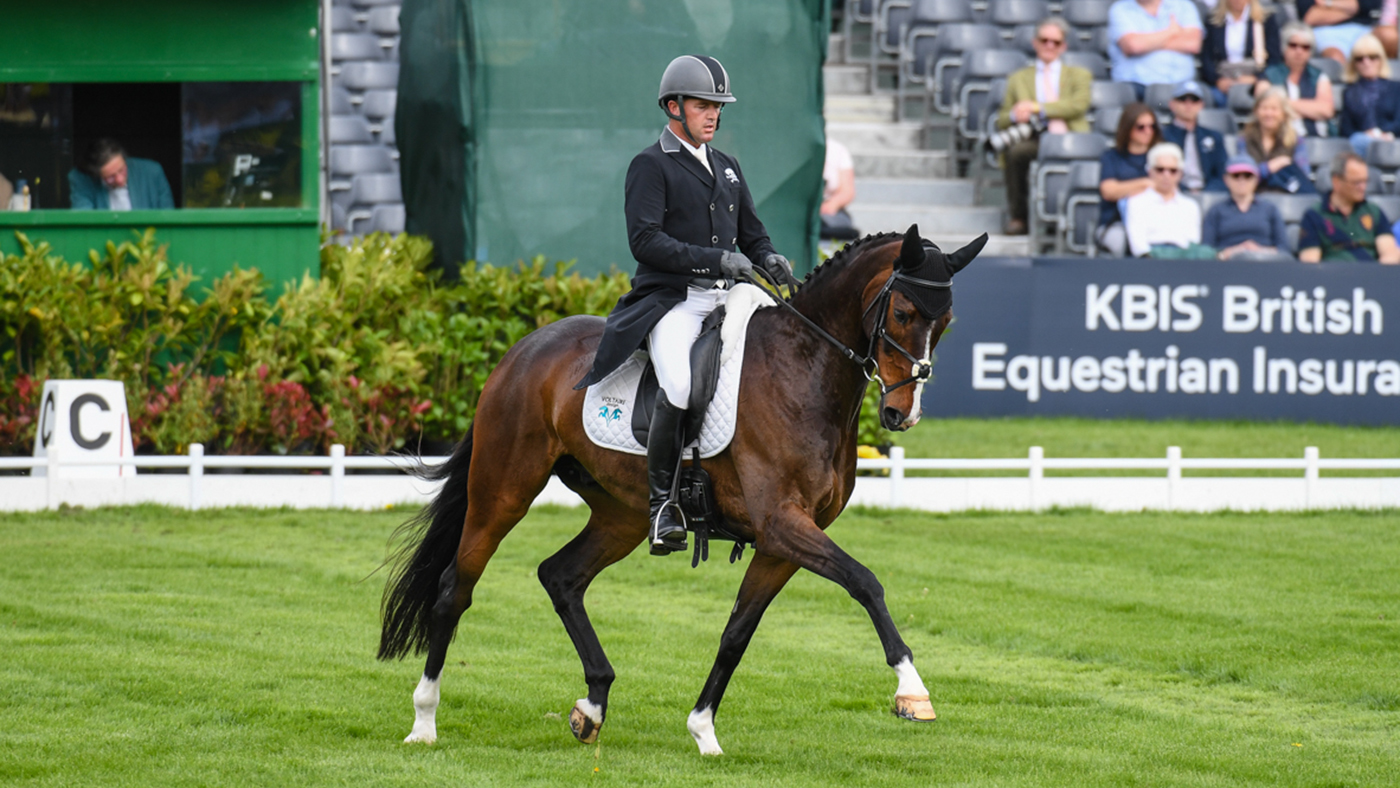 Jennifer Mosing and Sterling Silver Stables’ Mama’s Magic Way is another who was unsettled by the grassroots cross-country on Wednesday.

“He got really lit up,” said Will, who has competed here once before. “So it was trying to keep him settled. He actually stayed somewhat rideable in there. I was getting run off with everywhere, but he tried and he’s so talented. It’s just getting his mind in the right spot.

“We can do dressage at home – maybe we could do that and just send in videos for them to judge! But it’s not a dressage competition. Saturday is the big test.

“He’s still relatively young although he’s done two five-stars and while the score is disappointing, I was happy he didn’t have a complete meltdown.” 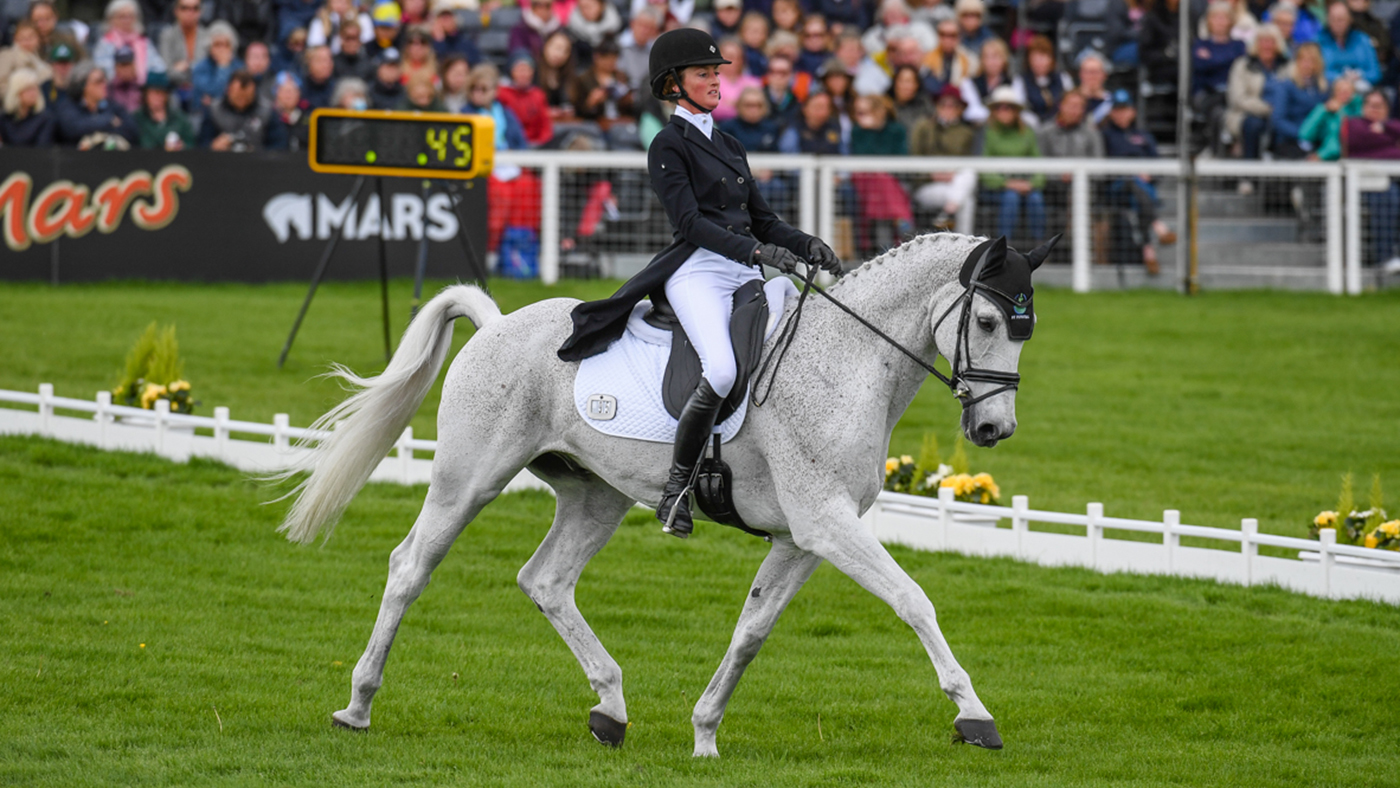 LLC’s Corvett was quite tense in the arena and finished on a score of 39.5. Badminton first-timer Emily said: “I was just excited to be in the ring. I tried to take it all in and also ride well. He was feeling fresh but overall I’m pretty happy and excited for tomorrow. “