Maricarmen Reyes scored a go-ahead goal off a rebound in the 107th minute and top-seeded UCLA rallied past North Carolina 3-2 on Monday night to win its second Women’s soccer Championship in program history.

UCLA (22-2-1) trailed 2-0 late in the second half before scoring two goals in the final 10 minutes to force overtime. In the second 10-minute overtime, Ally Cook had a close-range shot knocked wide by North Carolina goalkeeper Emmie Allen, but Reyes raced to the ball for a sliding finish from a difficult angle.

The Bruins became the first Women’s soccer program in NCAA history to win the title with a first-year head coach. And Coach Margueritte Aozasa’s Squad was also the first to come back from two-goals down to win the national title.

“I’m just amazed by this team and the grit that they showed and the character they showed today,” Aozasa said. “I even had my doubts at 2-0, but quite honestly no one on the field did and they just found a way.”

Lexi Wright pulled UCLA within 2-1 in the 80th minute. The goal-scoring sequence started with Jayden Perry’s long free kick that was headed out of the box. Sunshine Fontes was first to the loose ball and her shot was blocked by Allen but it spilled to Wright for a one-touch finish.

UCLA tied it at 2 with 16 seconds left in regulation when Reilyn Turner headed in Ally Lemos’ corner kick in front of an announced attendance of 9,531.

UCLA’s only other Women’s soccer title came in 2013 — also in extra time. 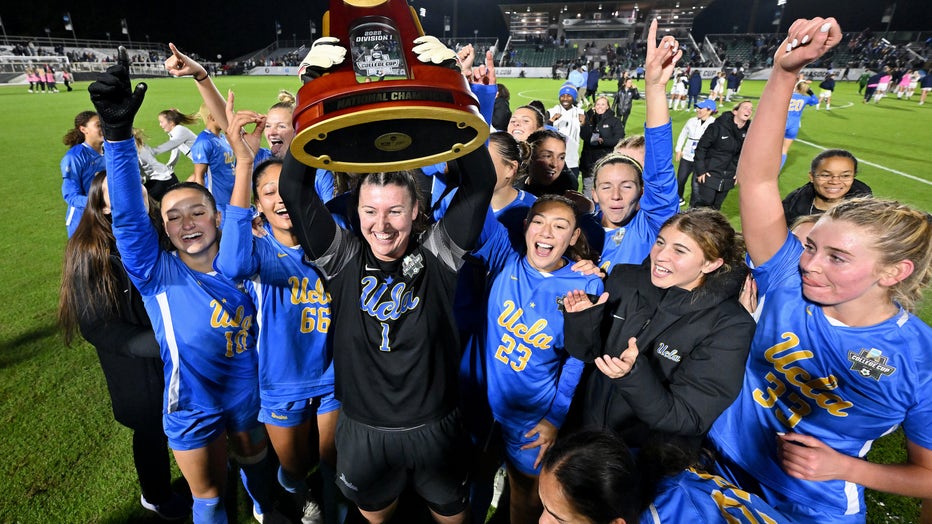 The UCLA Bruins celebrate after a win against the North Carolina Tar Heels in the Division I Women’s Soccer Championship on December 05, 2022 at WakeMed Soccer Park in Cary, North Carolina. The Bruins won 3-2 in overtime. (Photo by Grant Halverson/NC

Avery Patterson opened the scoring in the 59th minute by heading in Emily Moxley’s cross. Patterson added her team-leading 13th goal of the season in the 75th.

All five of North Carolina’s losses this season came after leading 1-0, including the lone regular-season meeting with UCLA when the Bruins scored twice in the final 30 minutes on Sept. 4.