If you listen to the podcast, you’ve heard the secret sauce: chase rate, barrel rate, contact rate. Give me a hitter who knows the strike zone, has bat speed, and can put the bat on the ball, and I’ll show you Mike Trout.

What’s even better about these three stats is that for most hitters by now they’re showing us more signal than noise, meaning they’re relevant even though we’re only a month in. What’s not relevant is a player’s slugging percentage or his batting average, because that’s full of all sorts of luck-driven noise.

So let’s do something simple. Here are all the players with more than 50 plate appearances who are top third in chase rate (o-swing%), contact rate (swSTR%), and barrel rate (Barrel%) and have an OPS under .800, courtesy of FanGraphs . Really, you’d rather have 70-75 plate appearances, but this is a group of 12 hitters – Yasmani Grandal, Max Muncy, Christian Walker, Cooper Hummel, Mike Yastrzemski, José Abreu, Garrett Cooper, Christian Yelich, Gavin Lux, Anthony Rendon, Will Smith, Alex Bregman – who should all collectively represent good buy-low opportunities in your fantasy leagues, or good bets to improve their fortunes for your favorite real-life team.

Most of these players have a track record that suggests they’d get it going anyway. And if you pair a good track record with a nearly .800 OPS, like Alex Bregman, you probably have a situation where it would not be that easy to pry the player away. But maybe these four players combine the right measures of attainability, track record, process and results to make for good trade targets right now.

How is this guy hitting .161? He makes contact in the top third of the league, his strikeout rate is better than average, he hits for power, he does not pull everything (44th in pull rate) and he’s not super slow, especially for a first baseman (49th percentile ). There’s one clue once you scan across his batted ball profile that’s both a positive and a negative: he’s hitting 56 percent of his balls in the air, and that’s good for power but bad for batting average. The group of hitters that had a fly-ball percentage over 48 percent from 2020 to 2022 had a collective .220 batting average.

That’s a bit of a red flag, but those hitters consistently hit that many fly balls, while Walker came into this season with a 38 percent fly-ball rate. He has not had this extreme launch angle his whole career. In fact, his launch angle this year and last year are not all that far apart if you look at them using a rolling average. Here’s a rolling average using fifty balls in play.

All this is to say that Walker hit .244 last year, and .244 for his career, and nothing he’s doing looks all that different from what he’s been doing for his career, so he can easily hit .244 going forward. That might be league average this year, and it should come with his best power numbers. The improvement in contact rate even allows for the possibility that he hits better than .244 going forward.

Plus, it’s been a long time since 2019 when he hit 29 homers. He might even be on your waiver wire, the best sort of buy low. Consider that Rowdy Tellez would have been on this same list just a few days ago for the same reasons as Walker, and now the Brewer has a .951 OPS and is the hottest pickup in the game – you might want to run and go get Walker .

Speaking of Brewers, here’s a former MVP who has fallen from grace. You do not need a fancy launch angle graph when good old ground-ball rate tells the story. 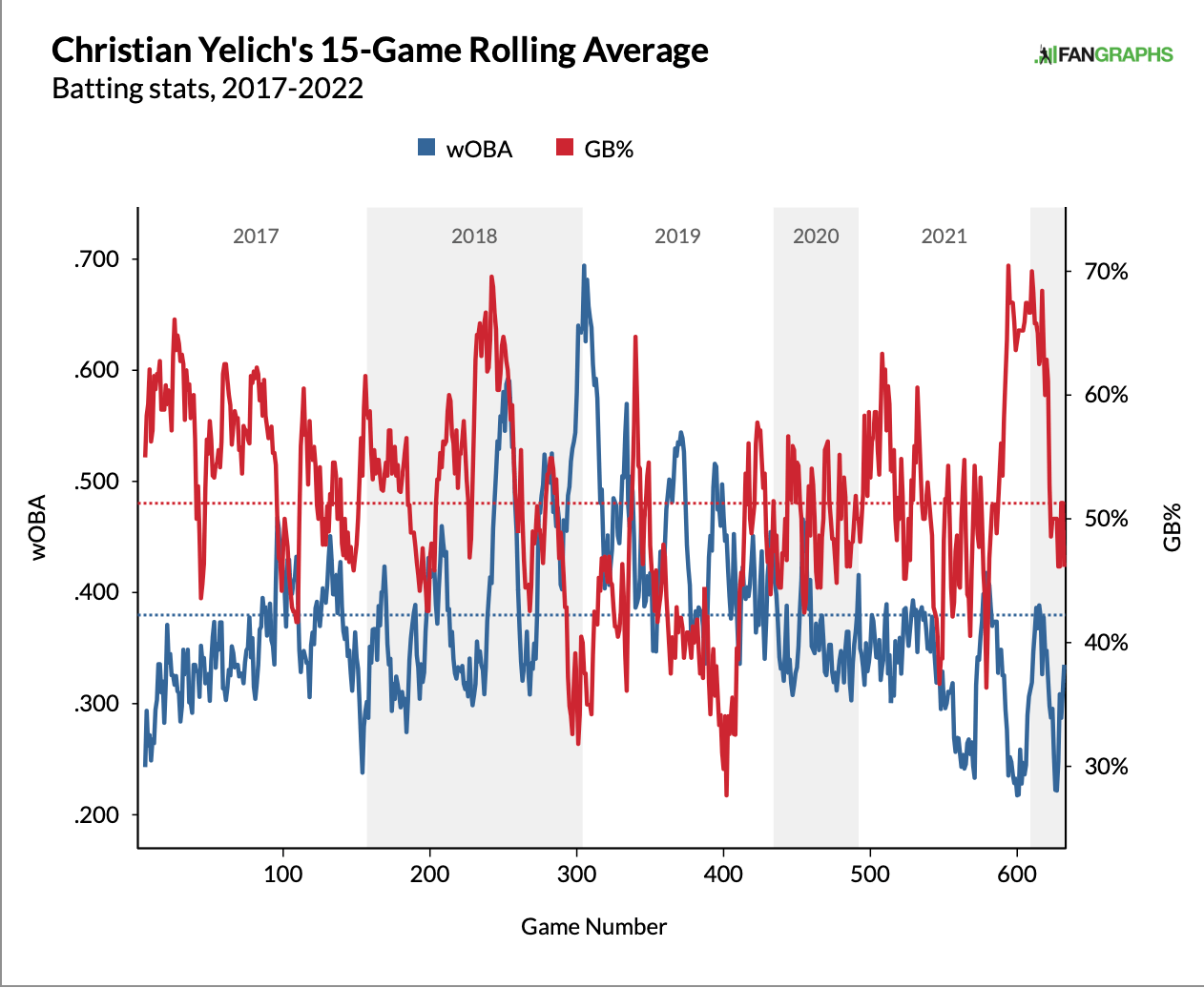 Well, for one, if you look at the very far right of the graph, you’ll see that his ground-ball rate has returned to normal after a spike late last year. Second, he’s had really good seasons before with 50 percent ground-ball rates – he won an MVP award with a 52 percent ground-ball rate as an example. His barrel rate that year? 12.2 percent. Right now? 14.8 percent. Of course, we know barrels aren’t flying as far right now, and the ball isn’t as juiced as it was in 2018, but we also know that the weather will warm, the humidor is a huge part of why offense has been down, and the humidor will have different effects on the ball at different parts of the season.

The really good news is that he’s making contact and seeing the ball well. It’s possible he’s a little late on the ball, but just a little more aggression from Yelich – and he’s traditionally been a player who swings more as the season progresses – might get him out front, hitting homers. He seems very likely to hit his projected marks of .265 with 20 more homers and 12-15 stolen bags. Not quite MVP Yelich, but also pretty damn good.

I’ve been out on Gavin Lux, who hasn’t been hitting the ball hard so far in his career. He entered the season with a 4.6 percent barrel rate and a .136 Isolated Slugging, both marks that fall below average for a starter. His versatility, patience, and ability to make contact kept him in the lineup, but I wasn’t sure he’d ever hit even 15 homers in a given season. Now he’s got a .103 ISO and I’m back in?

Sure. He’s hit 47 balls in play with five barrels, and barrels are among the most powerful predictive stats we’ve got. Consider that he put 254 balls in play last year and only had 10 barrels! Lux is also hitting the ball harder, on average, with a 45 percent hard-hit rate. He hasn’t had one singular event over 110 mph, which would be a first, but the absence of a hard-hit ball does not mean it’s not in there. Lux looks like he could hit 12-15 more homers the rest of the season despite the fact he’s only hit one and still hits over half of his balls in play on the ground. Dodger Stadium gets hot in the summer. Just a few weather-aided inches would’ve turned his hardest-hit ball so far this year into a homer:

In the meantime, Lux has taken his strengths and made them even strengthier. He’s now got a Top 40 swinging strike rate paired with a really good walk rate and a pristine chase rate. At the very least he has two of the three things you need from your hitter (patience and contact ability), and there’s some early good news on the third (power).

He’s 31 and has had some hip issues. He’s hit 18 homers since he signed with the Angels in 2020. It might take a while for Rendon managers to feel all that good about a 9.5 percent barrel rate or improved swinging strike numbers in the face of a .231 average. On the other hand, his believers might say no thanks and hold for the hotter months themselves.

So the real question is: is this an interesting time to trade for Rendon in keeper leagues? Traditionally, you would not trade for a player with an injury history in their 30s in those sorts of leagues, but that might be what makes him attainable. His manager may feel it’s his last good bounce, and the injury will be back. But what if he’s got his body back? He has stolen two bags this year. Let’s look at four possibly relevant Statcast stats over his career to see if there are underlying reasons to believe he might have another good four or five years in him in fantasy baseball.

It’s a mixed bag. His foot speed has improved a little but is not great. The good news on outs above average is that this is a pretty tiny sample for a defensive statistic, so he could still improve there. The best news is that the bat looks like it’s all the way back. His minuscule swinging strike rate is back, his walk rate is good, and the barrel rate is the second-best of his career.

Other than the hip injury and the foot speed, this is the kind of bat you’d bet on to age well. He does not reach outside the zone, he’s not a pull-at-all costs slugger yet, and he makes a ton of contact. Especially in OBP leagues, this might be a good time to pick him up for a good three-year span, and he should still be cheap-ish in those kinds of leagues.