“I was like, ‘I have no idea what sport that is, but that’s the coolest jersey ever,'” Helgens told the Daily Iowan in the Xtream Arena concourse during an intermission. “And then later, I found out what it was and I watched the games and I just loved it.”

Helgens was one of the first people on the list for Heartlanders tickets. And he wasn’t the only Johnson County citizen who was ecstatic that a professional hockey club had come to Coralville.

Trisha Bartz lives in Coralville but grew up in a hockey family in Waterloo. Stephen Freeman, another Coralville resident, was raised as a Los Angeles Kings fan in southern California.

These are some of the Heartlanders ‘biggest fans, who followed hockey well before the Heartlanders’ existence, and they are the foundation of the niche fanbase that’s making the franchise sustainable.

But the franchise needs new hockey fans to thrive, because Coralville – unlike St. Paul, Minnesota, or Detroit – isn’t Hockeytown, USA.

Despite its single-game attendance record on opening night, the franchise struggles to push past the 2,000 mark per game.

Of 27 ECHL teams around North America, the Heartlanders’ average of 1,961 people per game is the second-lowest attendance in the league. Wednesday games usually seat less than 1,500 spectators, but the Heartlanders have drawn more than 2,200 on Friday and Saturday nights since the end of January into an arena that holds 5,100.

For comparison, the Iowa men’s wrestling program averaged 14,905 fans during the 2021-22 season as it sold out all its duals. The ECHL average attendance for the season is about 3,898 spectators.

The organization is executing a plan to make the Heartlanders more known throughout the area.

“Because we’re a first-year team, the progress is so tangible,” Heartlanders community relations coordinator Jordan Cue said. “You truly started with nothing. So, everything that we’ve built, the fan base that we’ve built, is all because of the hard work of the staff and the players. ”

The Heartlanders are involved in several initiatives to make a name for themselves in the community, though COVID-19 restrictions put a damper on certain events earlier in their inaugural season.

Whether it’s a meet-and-greet with skaters at a local Pizza Ranch, Fine interviewing players at Brick & Iron restaurant at the Iowa River Landing on Monday nights, the pen pal program at Coralville Central Elementary School, or the Learn to Play hockey initiative for children at the Coral Ridge Mall sponsored by Scheels, the Heartlanders are finding ways to get new people into Xtream Arena.

It helps the franchise that the players who come out to these events are happy to represent the team. Fan favorites like forwards Yuki Miura and Kris Bennett and defensemen Adrien Beraldo and Alex Carlson enjoy meeting the team’s small but developing fanbase and taking pictures with them.

“We’ve got a great fanbase here,” said Beraldo, who comes from Hamilton, Ontario. “It’s only the first year the team’s here and you can already see everyone loves hockey. The atmosphere when the building’s packed, it’s awesome. I think, for the years to come, it’s going to be a great spot, and the fans are only going to keep on coming, and there’s going to be more numbers of them too. ”

Following a fight between Carlson Mavericks, forward Mikael Robidoux during a game on Dec. 27, Helgens designed a t-shirt using Carlson’s likeness with the phrase “Kung Fu Carlson,” which he then sold to other fans. Carlson said during a postgame interview he got a chuckle out of the shirt.

“From what I’m hearing, every player that our fans have met that I’ve read through social media, they’ve been nothing but kind, generous, [and] accepting of the fact that, you know, we’ve got a team in Coralville, ”said Heartlanders fan Rik Zortman.

Zortman is one Heartlanders supporter who wasn’t a hockey fan before the franchise’s existence. After witnessing the opening night theatrics from two rows behind one of the goals, he decided to purchase half-season tickets. Next season, he will own full-season tickets.

Gugliano, the dentist who works in Coralville, was always interested in hockey, but he never had a team to root for after spending most of his life in Johnson County and struggling to find live games on TV.

Now, hockey is a family affair with his wife and four children, and he can’t stop attending games or talking about it – estimating 80 percent of what the family posts on Instagram is hockey related.

As someone who earned his bachelor’s degree and Doctor of Dental Surgery degree from the UI, Gugliano still roots for the Hawkeyes. But he hasn’t been followed them like he did for the past 20 years because of his newfound support for the Heartlanders, which he said came 100 percent from getting to know the players when he did mouthguard fittings and saw how polite they were.

With the very young population that includes a high concentration of families and college students, the Heartlanders market toward those in their 20s through 40s, whereas other ECHL franchises are known for an older fanbase because of their local demographics. About 60 percent of the Heartlanders’ fan base comes from the local market, Heartlanders Vice President of Ticketing Sales and Marketing Mike Pence said.

“We want Xtream Arena, we want the Iowa Heartlanders, to be the place to be,” Pence said. “When, you know, on Wednesday there’s going to be a game, or a Saturday or Sunday, it’s the place to be.”

When the Heartlanders play in their home rink, officials have organized amusement outside of the official contest, such as riding the Zambonis during intermissions. At the last game, children – and a soon-to-be married woman – took a trip around the rink.

The Heartlanders have also hosted specialty jersey nights, such as Pride Night or DC Comics Night, and those who attend can bid on players’ jerseys after the game. If they secure the highest bid, they receive the jersey and meet the specific player postgame.

Season ticket holders and group sales are key for any minor league sports organization. Before the season, Pence said the Heartlanders’ main goal was selling season tickets, which put them behind on group tickets.

But in the second half of the season, Pence said the Heartlanders are ahead of where they were with group sales compared to the beginning of the season, noting that it takes one to two months to fulfill those transactions.

“We’re appreciative of everyone that comes out,” Pence said. “We’ve probably got one of the rarest fanbases that stays to the end of the game, no matter if we’re winning or losing, which is tremendous.”

Even when the arena seats half of its 5,100 capacity, the compactness of the barn makes the crowd noise seem like it’s at full occupancy.

McKenna said COVID-19 hurt the franchise’s group sales. It saw more individual sales in its inaugural season, but he expects that to change next year when there’s consistently large groups. The organization has garnered a better understanding of where it needs to go for marketing in the community, and now more Heartlanders gear has been spotted around the area than before the season.

The Heartlanders, though seeing their fanbase grow, do not aim to become like the Fort Wayne Komets or the Toledo Walleye, their division rivals.

Those clubs are the biggest winter sport attraction in the metropolitan area and possess an average attendance of around 7,000. Heartlanders organizers recognize that Hawkeye Athletics – particularly football, basketball, and wrestling – will always be the talk of Johnson County.

Instead, the Heartlanders are there to complement the UI teams as another entertainment option for locals. They are a missing puzzle piece to the only major North American sport not represented by a Hawkeye varsity program. McKenna said the organization sees December through the end of the regular season as its niche.

“The response we’re getting from the crowds has been positive,” McKenna said. “It simply came to our notice then. There’s a community spirit here that isn’t in all markets, and that’s encouraging. ” 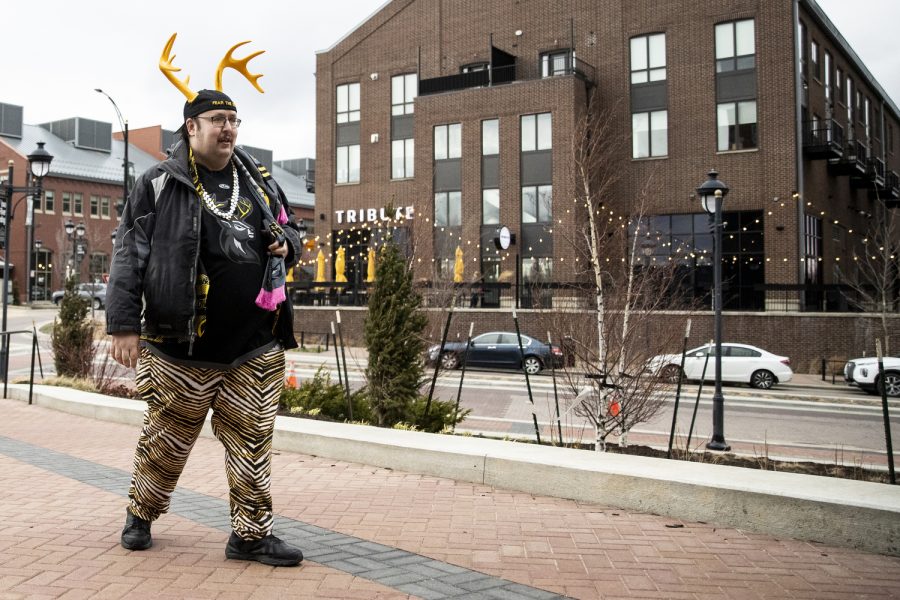 Marc Korver walks along the Iowa River Landing area before a hockey match between Iowa and Wheeling at Xtream Arena in Coralville on Wednesday, April 6, 2022. On average, the Heartlanders averaged 1,961 fans attending home games throughout the season. The average attendance marked the second worst in the ECHL.