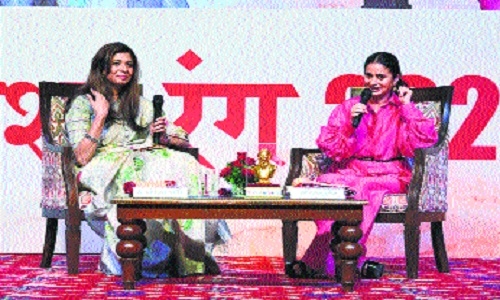 The festivities of the Tagore International Literature and Art Festival, Vishwarang’s concluding day, witnessed a plethora of interesting sessions, on Sunday. As a custom, the day began with an invocation. Ambreesh Kalele enthralled the audience with his performance on Mohan Veena. Later, the mega art and culture celebration saw a series of high-profile sessions where eminent personalities of the country participated and expressed their views on various subjects.

Noted Entrepreneur and Shark Ashneer Grover addressed the hall on ‘Power Of Regional Languages ​​In Building A Business.’ Vishwarang’s co-Director. Dr Siddharth Chaturvedi led the conversation by asking why Ashneer agreed to participate in Vishwarang, as it is not a startup or entrepreneurship platform. To which the young Entrepreneur said, “I love Bhopal. Also, I have written a book on entrepreneurship, ‘Doglapan’. I am here to promote the same. Vishwarang is an apt platform to reach a wider audience.:

Rasika Duggal interacts with cine lovers of Bhopal In the morning session, acclaimed actress Rasika Duggal interacted with the audience on the subject ‘New Platforms for New Stories’. Dr Pallavi Rao conducted the session by asking insightful questions. During the conversation, the star said, “Makers were making short films even earlier. But they were not getting distributed. Today we have so many OTT platforms. Within a day or two, we get a million views on YouTube. Now it has become easy for Films to reach the audience.”

The Powerhouse performer also talked about her characters in Mirzapur and Delhi Crime. Rasika Duggal

confessed that Kashmir is her favorite place in the world. While further commenting, she said, “When one visits a place as a tourist, we miss many hidden gems. But when we go for a shoot, we get to know the area closely and interact with those people.” While sharing her experience of shooting Hamid, the actress said that if you are unaffected by your work, then there is no point in doing it. Meanwhile, the audience asked various intriguing questions.