The Seahawks had one of the best and most productive 2022 draft classes in the NFL and received on-field contributions from seven of the nine players they selected. In looking back at Seattle’s Rookie class, we’ll first break down the defensive players.

The one defender who won’t be included is fifth-round outside linebacker Tyreke Smith, who spent the season on the physically unable to perform list with a hip injury. Coach Pete Carroll said last week that Smith should be “fully recovered” and available next season.

“He can be a factor for us,” Carroll said.

Here’s a look at the rest of the group. All stats provided by TruMedia unless noted.

Mafe was the 40th pick in the draft out of Minnesota and played 36.6 percent of Seattle’s defensive snaps with starts against the Saints, Cardinals (Week 6) and Chargers. Bruce Irvin took over in Week 8 as the starting outside linebacker opposite Uchenna Nwosu.

Mafe rushed the passer 176 times, sixth most on the team, but he had just one more pass-rush rep than Irvin despite playing in six more games. Among the nine Defenders with at least 100 pass-rush snaps, Mafe finished eighth in pressure rate at 5.7 percent. They finished with three sacks, 10 pressures and four quarterback hits.

Mafe’s first sack came on a Jimmy Garoppolo run-pass option gone awry in Week 2. Garoppolo’s quick pass was defended well by Nwosu, then Mafe came and chased the quarterback down from behind. In Week 8, Mafe had a free Rush on Giants quarterback Daniel Jones because of another broken play: The entire left side of the Offensive line started run blocking on what looked like a pass play on third-and-2, leaving Jones unprotected in the pocket. Mafe’s quarterback hit on Andy Dalton in Week 5 was another breakdown. Seattle showed a double A-gap blitz and neither running back Alvin Kamara nor left tackle James Hurst picked up Mafe Flying off the edge.

Mafe’s third and final sack, which came in Week 18 against the Rams’ Baker Mayfield, was a better indicator of what type of player the 24-year-old edge defender can become. On third-and-3, Mafe used his speed and athleticism to Bend around Ty Nsekhe, using his arm to swat the left tackle’s attempt at re-routing him. Mafe was able to disrupt Mayfield’s timing, then with help from the coverage unit, he had an extra half-second in the pocket to eventually drop the quarterback for a loss. That combination of speed and effort is why the Outlook for Mafe is so promising.

.@boye_mafe 🇳🇬 showed up in a must-win game for the @Seahawks and helped secure their postseason spot💥#NFLAfrica #Rookie #Watch #Seahawks #Naija pic.twitter.com/qNV8yZWNG9

Being a starter requires rushing the passer and playing the run with power and discipline. Mafe was able to do both, another promising sign. They consistently held down the edge and either dropped ball carriers themselves — Mafe had five combined tackles for loss and run stuff — or created an avenue for his teammate to make the play. Seattle starting Darryl Johnson over Mafe in Week 4 (which is when Johnson suffered a season-ending foot injury) and Irvin in weeks 8 through 18 suggests the team felt the rookie wasn’t ready to be a bigger part of the defense, but there’s no reason to believe he can’t be an every-down player for the Seahawks in his sophomore season.


Despite playing Nickelback for the first time, Coby Bryant showed the Seahawks he’s someone they can count on going forward. (Steph Chambers/Getty Images)

Bryant, drafted with pick No. 109 in the fourth round, had never played nickel until August. A four-year starter at outside cornerback in college, Bryant played his natural position in Seattle’s scheme through the mock game at Lumen Field then switched to nickel ahead of the preseason opener. The context of the position switch is important when evaluating Bryant’s rookie year.

There were early growing pains. In Bryant’s second regular-season snap, he gave up a 67-yard touchdown pass to Denver’s Jerry Jeudy in Week 1 and was benched for the rest of the game. Seattle’s defensive coaches wanted to see how he’d respond to that situation, and Bryant didn’t disappoint. He basically took over as the starting nickel in place of Justin Coleman the following week and looked more comfortable in Seattle’s loss to San Francisco. Bryant had three splash plays in that game: a third-down stop in coverage against receiver Brandon Aiyuk; a forced fumble on a Deebo Samuel run as the backside defender; and a shared tackle for no gain on a Jeff Wilson run.

Seahawks mock draft reaction: A big trade, a pass rusher and much, much more

In coverage, Bryant didn’t allow another touchdown until Week 5 against New Orleans Rookie Chris Olave on a pass that was initially ruled incomplete because the receiver lost the ball (and consciousness) when Bryant slammed him to the ground. Regardless, Bryant didn’t allow another score the rest of the season and was an integral part of Seattle’s midseason defensive turnaround. Not only was Bryant generating turnovers — he had three straight games with a forced fumble — but his ability to be reliable in run support allowed defensive coordinator Clint Hurtt to use him as a hybrid linebacker on early Downs in place of Cody Barton, who was struggling early in the year.

Bryant finished the season tied for third among Defenders with four forced fumbles. He had four passes defended, seven stops short of the sticks on either third or fourth down and two sacks. Much is asked of the nickel in Seattle’s scheme. He has to run vertically with No. 2 receivers in the slot (which is what happened on the Jeudy and Olave touchdowns), drop into zone coverage and take away crossing patterns, play the run against heavy personnel and blitz the quarterback effectively.

Like all rookies, Bryant has room to grow, which is expected after playing an unfamiliar position, but Seattle isn’t entering this offseason overly concerned about the nickel position. There’s an argument to be made that Bryant should get a shot next summer to compete for a starting outside cornerback job, but even if he remains at nickel, Seattle should be in good hands. 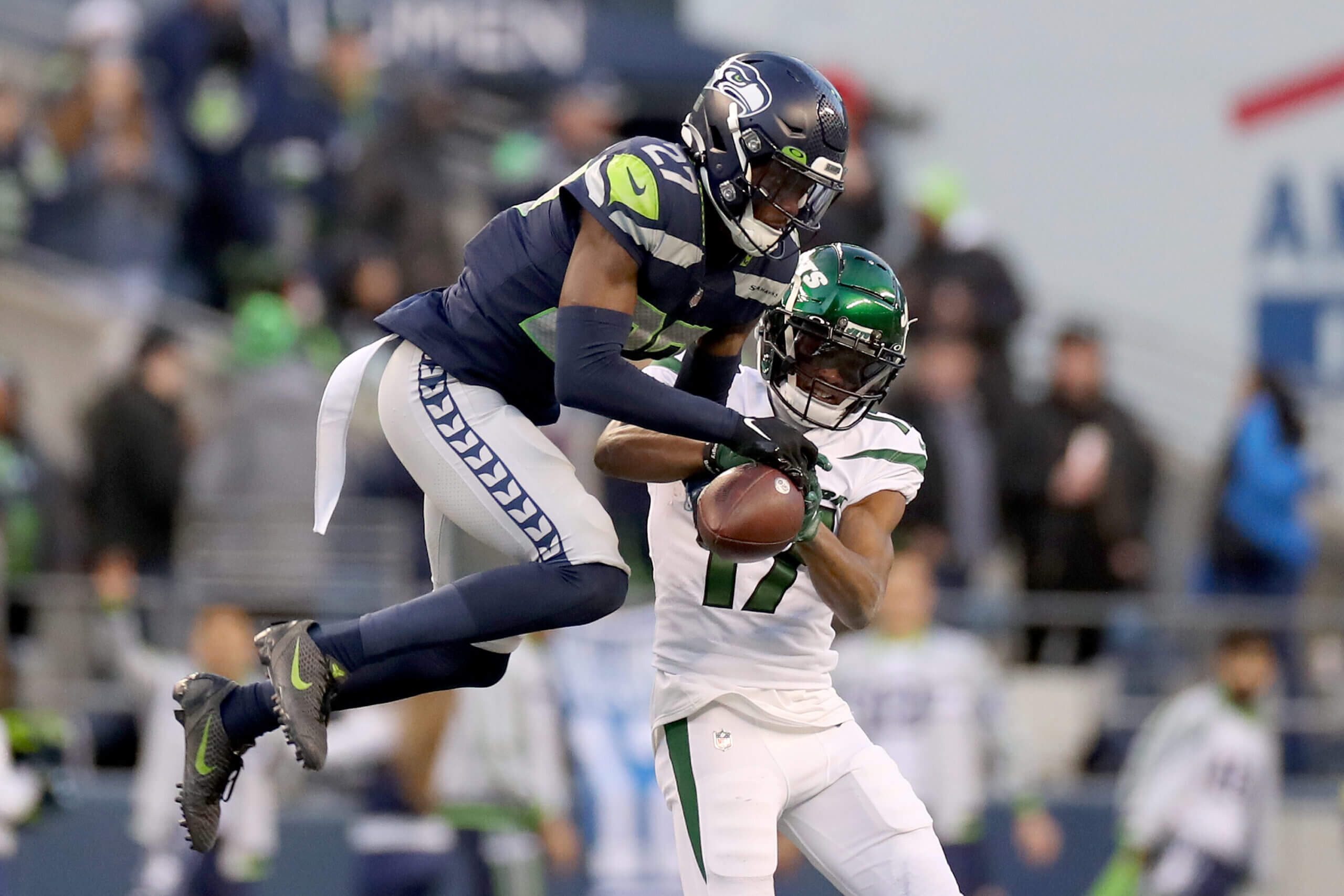 Tariq Woolen was one of the Seahawks’ best defensive players but picked a bad time to have his worst game of the season. (Steph Chambers/Getty Images)

Woolen was one of the best cornerbacks in football as a rookie, which is why he was voted to the Pro Bowl and received a pair of First-Team All-Pro votes in only the third year of his football career playing the position. He’s a finalist for the NFL Rookie of the Year Award voted on by the fans (this is different than the Associated Press award for Defensive Rookie of the Year).

Woolen had as successful a debut season as anyone could expect, especially as a fifth-round pick who played receiver his first two years in college. What’s unfortunate for Woolen is the last game he played was his worst of the season.

In the wild-card loss to San Francisco, Woolen was targeted nine times and allowed six catches for 138 yards as the closest defender, according to Next Gen Stats. He was one of only two Corners (San Francisco’s Charvarius Ward being the other) to give up more than 100 yards on wild-card weekend.

They didn’t give up any touchdowns, thanks in part to the closing speed they showed on a pass Breakup in the end zone in the first half. But while impressive, that play was an example of where Woolen can still grow. He bit hard on a play-action fake and left his receiver wide-open in the end zone. They did the same on an explosive pass play in the fourth quarter. San Francisco consistently attacked Woolen on deep over routes. Seattle’s Underneath coverage didn’t do Woolen any favors but, in that setting, it was a bad time for Woolen to have his worst game in coverage.

“When he plays coverage outside when he is one-on-one with guys, he’s on his way there. It’s the rest of the game that he has to gain more experience at,” Carroll said of where he’d like to see the young corner grow.

“He’s just as raw as you can get,” Carroll said. “What that means is when he got caught on the deep ball a couple of times in the game last week, there were situations when he has seen the run game and hasn’t seen it properly with the run, pass stuff. That’s just experience and discipline and reps. He’ll see so much more than what he was seeing right now. It’s a freaking blur like it’s a Storm blowing at him. We’re trying to sort it all out. It will be much better for him. They can be a complete player. They can do it all.”

Carroll’s words represent the overall feeling about Woolen, who was one of the team’s best defenders this year. Sure, he can improve in zone drops and in run support, but those facets of his game will get better with time. With Woolen’s work ethic and a coaching staff dedicated to developing him, “the sky is the limit for him, for sure,” Carroll said.