Tim Sofran, left, teamed up with Dom Livedoti on May 4 to win the day’s Championship, then walked his way to the winner’s Circle during the May 7 Horseshoe competition at the Anna Maria City Hall lace. Islander Photo: Courtesy AMI Pitchers Margaritaville Night begins with fun, ends with a win for Bradenton Andrew Wright, with the Compass Hotel by Margaritaville, tosses a first pitch at LECOM Park on May 7, when the Bradenton Marauders hosted the Tampa Tarpon in Minor League baseball action. The Marauders celebrated Margaritaville Night, Sponsored by the Compass Hotel, and also a Victory. The Marauders ended a four-game losing streak with the help of Crafty pitching and a late go-ahead hit by Brenden Dixon in a 3-2 win over the Tarpons. Islander Photos: Marty Morrow / Courtesy Bradenton Marauders 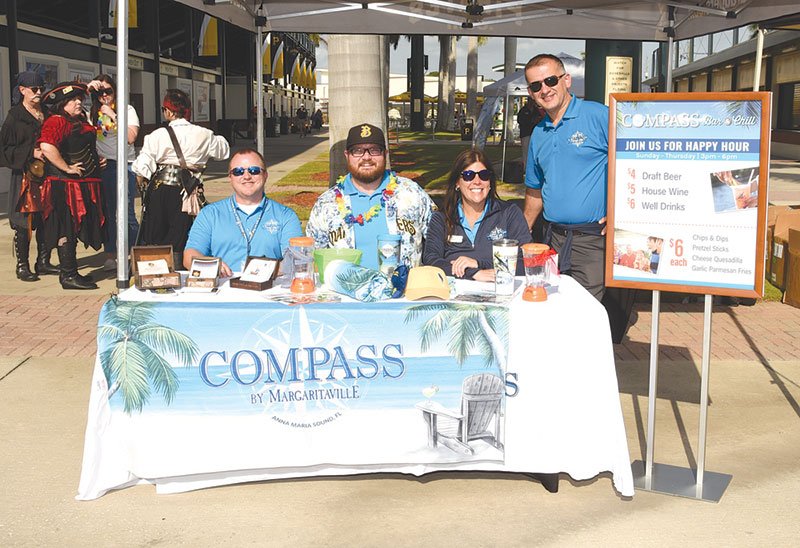 A crew from the Compass Hotel on Perico Island greets baseball fans on May 7 at LECOM Park in Bradenton, when the Marauders defeated the Tampa Tarpon. The Perico Island hotel Sponsored Margaritaville Night at the ballpark. These Pirates don’t play for Pittsburgh. Anna Maria Island Privateers joined the Celebration May 7 for Margaritaville Night at LECOM Park, where the Bradenton Marauders took on the Tampa Tarpon.

The United Way event saw a record attendance of 600-plus Runners, more than double the participants of previous years. A beautiful, 70-degree morning greeted the Runners, who traversed a course that circled a lake with gator spectators and also included a stretch of Ranchland.

Hooke finished third overall in the race at 20:51, his fastest time in more than two years. He Shattered the previous Senior Grandmasters – 60 and over – record by 1 minute, 49 seconds, but fell short of a new record because the overall Winner, Phillip Ippolito of Naples, also runs in the 60 and over age group. Ippolito posted a run time of 19:33.

Hooke’s time was good enough to take the title for the Grandmasters, 50 and over.

Back at home, Hooke is a longtime employee of Galati Marina in Anna Maria.

With one week left on the regular schedule for the adult soccer league at the Center of Anna Maria Island, the only certainty is that Moss Builders will be the No. 1 seed.

At 6-0, Moss holds a two-game lead over Servis First Bank, which holds down second place to a 4-2 record. Gulfview Windows & Doors is in third at 3-3. Shady Lady holds down fourth at 2-2-2, while Progressive Cabinetry follows at 2-4. The Gitt Team at 1-4-1 and Salty Printing at 1-5 complete the standings.

Action May 5 kicked off with Moss Builders earning a 1-0 forfeit over Gulfview Windows & Doors, which failed to field a team.

Shady Lady then upset second-place Servis First Bank 4-2 behind two goals from Nate Welch and a goal each from Jake Parsons and Juan Pablo. Adam Mott helped Preserve the Victory with six saves in goal.

Tim Holly and Keith Mahoney each scored for Servis First Bank, which received nine combined saves from the trio of Max Gazzo, Daniel Hampton and Holly in the loss.

Next up, Sato Real Estate cruised to a 7-4 Victory over Progressive Cabinetry. Daniel Anderson scored three goals and had two assists to lead Sato, which also received two goals from Damir Glavan and a goal each from Selena Gonzaleza and Will Kretzman. Sean Flynn and Ben Sato combined on six saves in the Victory.

The last match of the night was no match, as Salty Printing earned a 1-0 forfeit over the Gitt Team.

Regular season action for the adult league will play out May 12 with the quarterfinal Playoffs May 19.

The youth soccer league at the center completed its third week with two games played May 3.

Beach Bums earned his first Victory on the season with a 3-0 Route of Solid Rock Construction behind two goals from Dylan Sato and a goal from Miles Moss. Camden Rudacille came through with five saves to help Preserve the Victory.

Isaac Roadman made three saves for Solid Rock in the loss.

Next up in the 8-10 division, the Flip Flop Candy Shop handed the Gitt Team its first loss of the season. Candy Shop prevailed 2-0 behind a goal each from Preston LaPensee and Luca Rosenkrans, while Keilee Mulcahy made four saves.

Kason Davis helped keep The Gitt Team in the game with six saves in goal.

Frankie Coleman notched both goals for HSH Designs, which also received six saves from Cyrus Ryan in the loss.

The second 11-14 match saw Moss Builders Crush Miz & Hiz Biz 7-2 thanks to five goals from Jack Mattick and a goal from Gabriella Gilbert and Mason Moss. Charlie Serra had four saves in goal.

Nixon Conner and Chad Nunez scored a goal each for Miz & Hiz Biz, which also received four saves from Konnor Oelfke in the loss.

Golf action tee off on May 2 at the Key Royale Club in Holmes Beach with the men’s Weekly modified-Stableford system match.

Ron Huibers grabbed the clubhouse bragging rights for the day after carding a plus-5 to edge second-place finisher Larry Solberg by one point.

The women stepped in on May 3 for their Weekly nine-hole individual-low-net match in two flights.

Sally LaPoint fired a 4-under-par 28 to lap the field in Flight A. Roxanne Koche took second place with an even-par 32.

Gloria LaDue carded a 3-under-par 29 to grab first place in Flight B by two strokes over second-place finishers Beth Lindeman and Terry Westby.

The week of KRC golf outings ended May 5 with a nine-hole shamble, where two scores from each foursome were counted.

The team of Steve Drum, Nelson Eagle, Ken Nagengast and Earl Ritchie combined on a 5-under-par 59 to win the day’s proceedings. The team of Bob Blaser, Mike Cusato, Mike Gillie and Gary Razze followed at 1-under-par 63.

Three teams advanced to the knockouts May 4 at the Anna Maria City Hall Horseshoe pits.

Sofran was back in the middle of things at the May 7 games, joining two other teams with 3-0 pool play records. Sofran Drew the Lucky bye into the Finals and watched Gary Howcroft and Jerry Disbrow edge Bussey and Hawks by a 21-19 score. Sofran made it a clean sweep for the week with an impressive 22-10 Victory over Howcroft and Disbrow.

Play gets underway at 9 am Wednesdays and Saturdays at the Anna Maria pits. Warmups begin at 8:45 am followed by random team selection.

There is no charge to play and everyone is welcome.