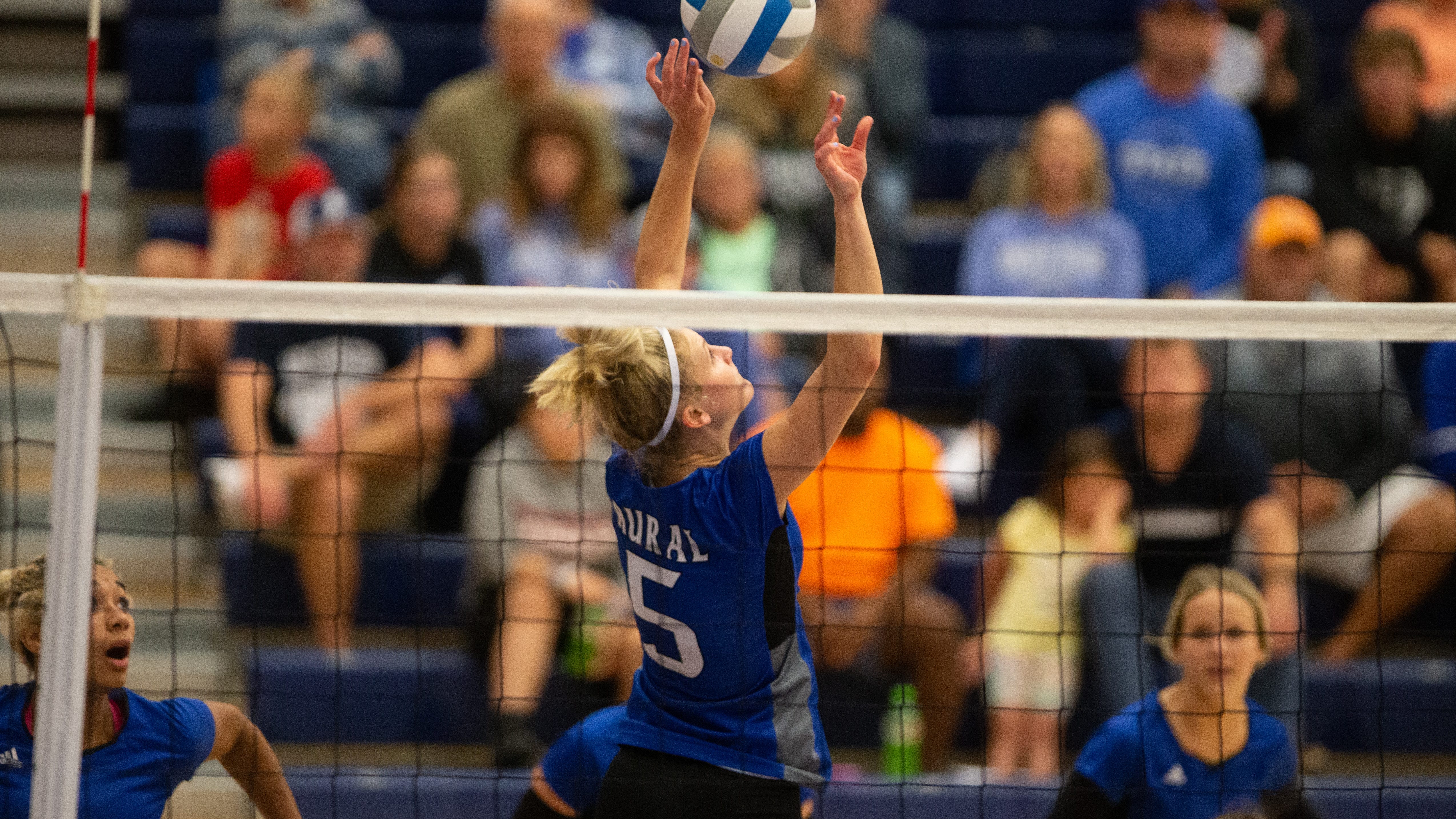 Championships are not won singlehandedly. A group of Washburn Rural volleyball role players are determined to do their part to win a title this year.

The Junior Blues further confirmed their No. 1 ranking in 6A by sweeping St. Thomas Aquinas, the second-ranked team in 5A, on Thursday at Washburn Rural.

But to win a Championship — something the Junior Blues want Desperately to do after falling short a year ago — it will require Excellence from everyone, not just the stars.

That’s where three Seniors will be key.

The top team in 6A is led by some very familiar names. Senior Brooklyn DeLeye was named the state’s Gatorade Player of the Year as a junior and has committed to play at the University of Kentucky, while fellow senior Taylor Russell and Juniors Zoe Canfield and Jada Ingram are all-league performers who are getting college attention in multiple sports.

Libero Katie Borough brings a positive mindset and a never-give-up attitude to every point. Middle Blocker Chloe Carlgren provides energy and tenacious defense on the front line. And defensive specialist Shianne Cobb is a steady presence who keeps balls from hitting the floor in the back row. The three Seniors are joined by junior Macey Jones and sophomore Layla Collins to give Coach Kevin Bordewick a reliable supporting cast.

“On all of the really great teams we’ve had, you’ve had the so-called ‘star players,’ the ones who get all of the press and whatever. But they can’t do it alone,” Bordewick said. “You need good, solid, hard-working role players like us to go out and do their job. Whether they’re playing for one rotation, one serve, or all six rotations, they have a job to do.”

Success requires everyone knowing, and accepting, their role, Bordewick said.

“Every kid wants to play the whole time. But unfortunately, that can’t be the case,” he said. “We have a lot of players with individual gifts. That’s what’s best about these kids. They understand that they each have a job to do, and I think they try to maximize that. That’s part of being a good teammate.

“The best thing about our girls is that they really accept that. They know what their job is, and they do it really, really well. Those role players are coming to work every day, wanting to get better, wanting to help the team.”

“We’re not the big players, but we bring something to the team, whether that’s energy or those other things that the team needs,” Carlgren said. “We know that in our role, it’s about being where you need to be, digging balls like crazy, blocking, getting those touches, whatever it is, so that we can get Brooklyn or Taylor the ball so they can pound it.

“And we still hype up those other girls. We’re excited for them and love what they do.”

The Seniors carried the pain of a state tournament breakdown all off-season. Washburn Rural entered last year’s tournament with a record of 38-0 and the top seeding in their favor. But they ran into a red-hot Blue Valley West team that dashed their hopes of a title.

“We were really disappointed, but we’re using it more as a positive side to motivate us,” said Borough. “We know we can do a lot better. And it (reminds) us that, yes these (regular season) games are super important, but once you get there, none of the records or any of that matter. It’s just what happens on the court.

“Obviously, going forward, we know that we need to push ourselves even more to get better. State is an end-of-the-year goal, but we have little steps that we have to take to get there.”

Bordewick and the Junior Blues ran off a flurry of championships that ended in 2012. The current group allows last year’s defeat to drive them in pursuit of the elusive title.

“It’s been 10 years. They look at the (2012) banner and I think they are hungry, especially after what happened last year,” Bordewick said. “It’s really up to the players to realize that: ‘Alright, if we want this bad enough, then we have to be willing to do what no one else does, work Harder than everyone else works. Play harder, be a great teammate, have great chemistry, etc.’”

Washburn Rural tests itself by playing the best opponents possible throughout the regular season. So far in 2022, the Junior Blues have tasted defeat just once, that to 5A Powerhouse St. James Academy.

“I think right now, you can tell that it’s still kind of the beginning of the season,” Cobb said. “We’ve had some rough games, but we keep our heads up and we work really hard at practice. We have so much further to go. We can definitely be way better than we are right now.”

“It’s a blessing because not only do we get to play with really good friends, but you’re winning. That brings us closer together,” Carlgren said. “We always have great support from the student section and from parents.”

“I think it’s really about having fun,” Cobb added. “If we’re not having fun, we’re not doing well. When we have fun, we are so much more of a team. Instead of playing individually, we can have fun together.”

How do they handle the pressure of such lofty expectations?

“This team has such a great mentality,” Borough said. “We have an inside joke during a game: We ask each other ‘What’s the score’ and we always say ‘0-0.’ No matter what’s happening, we keep ourselves level so that we can focus on what our jobs are and keep ourselves calm.”

Bordewick praised the trio of Seniors who are so supportive of their headline-grabbing teammates. They said the role players are integral to reaching the overall goals for the season.

“Our whole entire team, we have a long ways we can go,” Bordewick said. “We have a pretty high ceiling.

“They understand that it’s a process. You come to practice and you get better at some little thing each day. By the end of the season, if you’re doing what you should be doing in practice, then you have a solid group.”

The golden ring is still out there for the group to seize. But the Junior Blues learned last season that nothing comes easy.

“What do we do to get over the hump?” reflected the seven-time Champion head coach. “We just keep doing what we’ve been doing, because we’ve been pretty dadgum good for a while.”