Queen Maxima and King Willem-Alexander showed off their sporty side today as they opened the King’s Games with school pupils.

The Dutch Queen, 50, and her husband, 54, met with students at the Poptahof Community School in Delft to mark the national opening of the Games, which are taking place today ahead of Willem-Alexander’s birthday next week.

Sporting an off-white jacket for the occasion, Queen Maxima looked in her element, cooing over the pupils, boxing with schoolgirls and even showing off her archery skills.

The Games, which take place yearly, are traditionally held prior to King’s Day – where the nation enjoys open-air activities in celebration of the monarch’s birthday.

The Dutch Queen, 50, and her husband, 54, met with students at the Poptahof Community School in Delft to mark the national opening of the Games, which are taking place today ahead of Willem-Alexander’s birthday next week 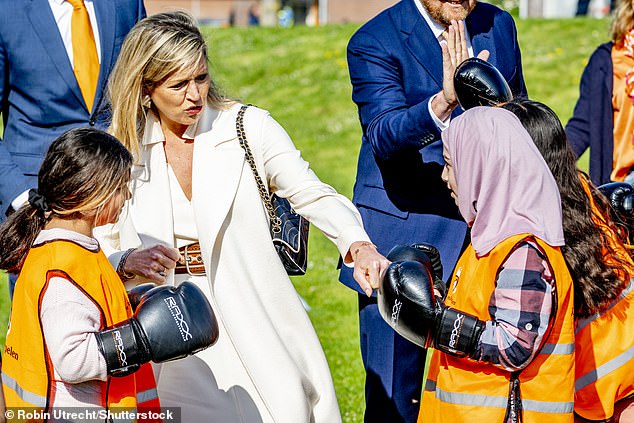 Queen Maxima looked in her element, cooing over the pupils, playing boxing with schoolgirls, pictured, and even showing off her archery skills

Willem-Alexander and Maxima both got into the spirit this morning, after they were welcomed at the school by a crowd of excited children.

The mother-of-three looked elegant in a loose white jacket which reached down to her knee.

She wore it over a midi dress of the same color and length, tied at the waist with a colorful bedazzled statement belt.

She accessorized with a baguette leather handbag and bicolour beige and black shoes. 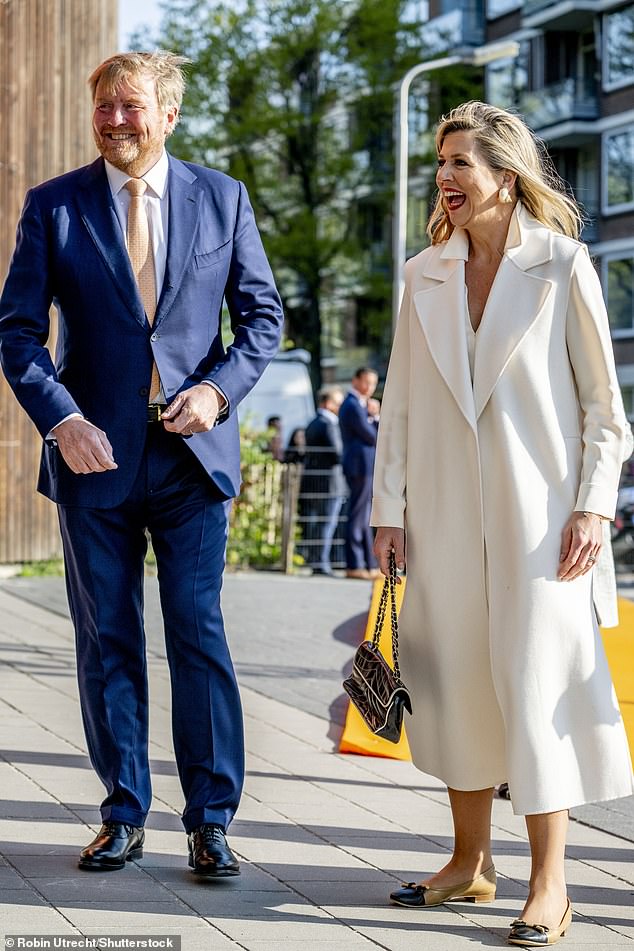 The Games kicked off today ahead of King Willem-Alenxader’s 55th birthday next week, known as King’s Day

The stylish royal, known for her love of original accessories, finished off the look with a pair of seashell stud earrings.

Her blonde locks were styled in a fresh blowdry, and the elegant royal let the wind ruffle her honey highlights.

She sported a glamorous every makeup, with a dash of bronzer adding a sunkissed-finish to her healthy glow, and a bold red lip elevating the look.

A touch of mascara and eyeshadow added an extra layer of warmth to her hazelnut eyes. 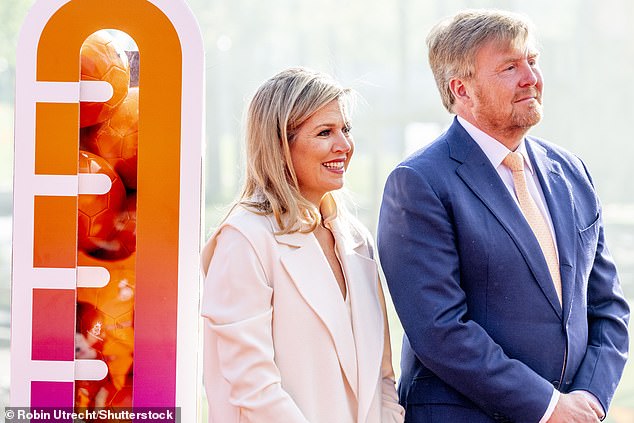 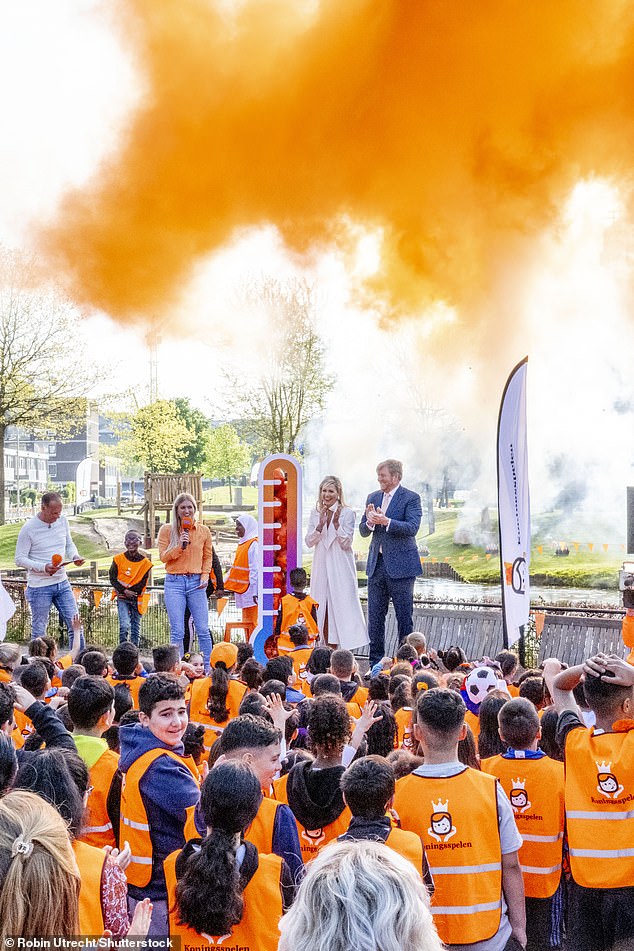 The pupils were sporting orange jackets for the Games. After the ceremony kicked off, a cloud of orange smoke was dispersed above the assembly

Meanwhile, Willem-Alexander looked very dapper in a blue suit, which he wore with an orange tie.

The Dutch King was not the only decked out in the warm summery color, pupils were all wearing orange vests, which is the country’s national color and synonymous with King’s Day.

The Dutch King will turn 55 next Wednesday, and the whole country will come to celebrate with street parties, music and an array of games. 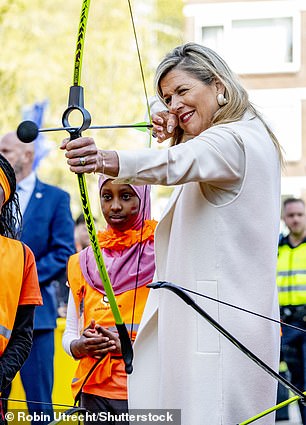 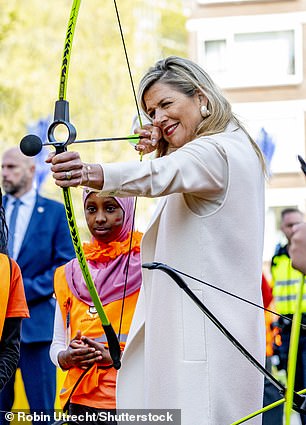 The Dutch Queen showed off her archery skills during the visit as she was handed a bow and arrow. Pupils were visibly impressed 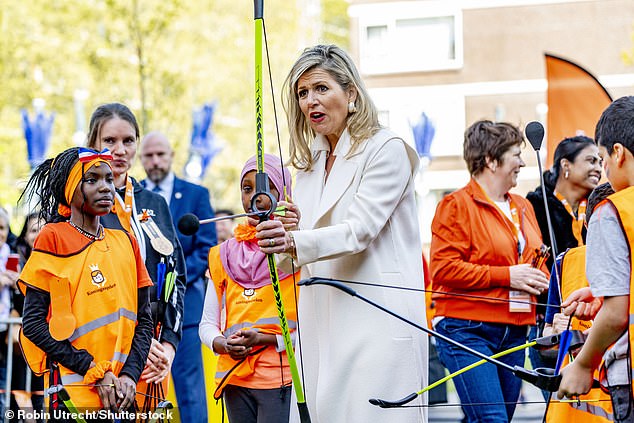 Uh oh! It looks like Maxima’s arrow didn’t quite make it to the target, but it didn’t dampen the Queen’s spirit

The King’s Game, which traditionally takes place before King’s Day, is a fun way of kicking off royal celebrations.

More than 1.5million children at 7,500 schools around the country will engage in sports and exercise as part of the games, as they enjoy a day of health and fun rather than lessons.

Today, Maxima and Willem-Alexander had a blast playing with the pupils of the community school.

The parents-of-three, whose daughters are all teenagers, with the youngest, Prince Ariane, being 15, doted on the young children, playing with them and taking part in all the group activities.

The couple declared the games open with the help of a younger helper. Adorable snaps showed the King holding the boy so he could put his basketball in the hoop with other balls.

After the ceremony, they seemed delighted to mingle with the schoolchildren.

As the children sat down for lunch, Maxima made sure to stop all the tables to say hi and to give the young games’ participants a royal high five. 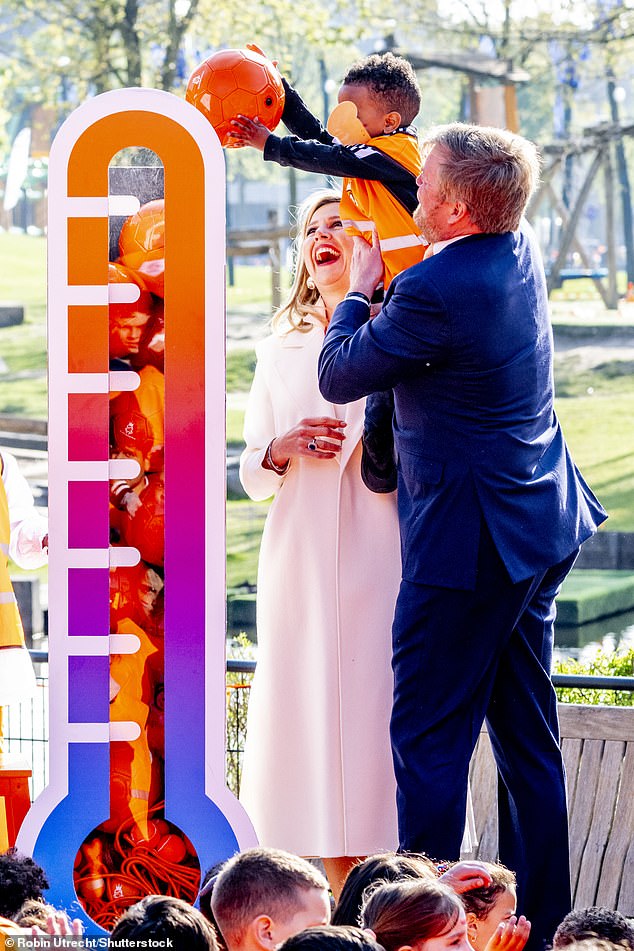 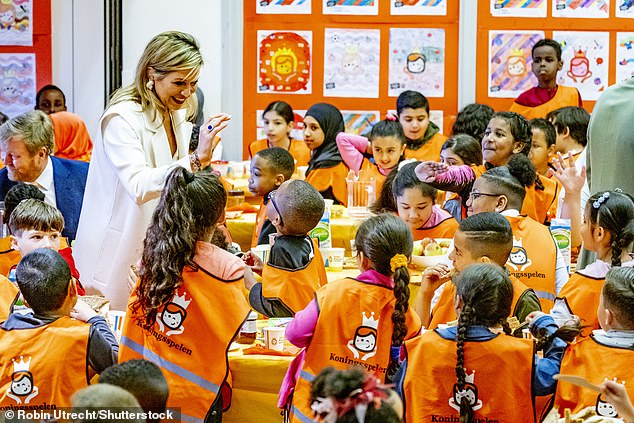 Maxima visited the pupils as they sat down for a snack this morning. King Willem also joined the children, left 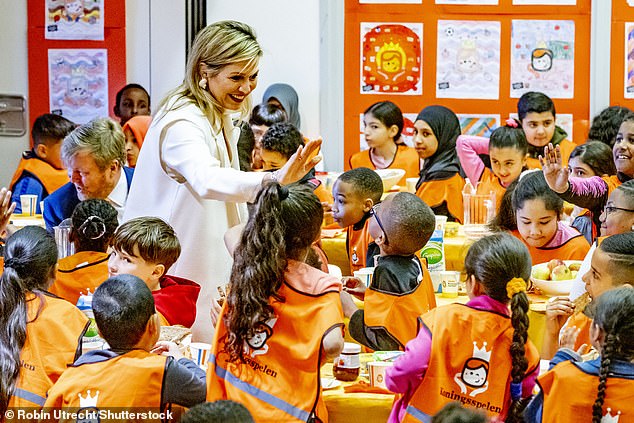 Maxima, who seemed delighted to spend her morning with the children gave some of the young participants a high five 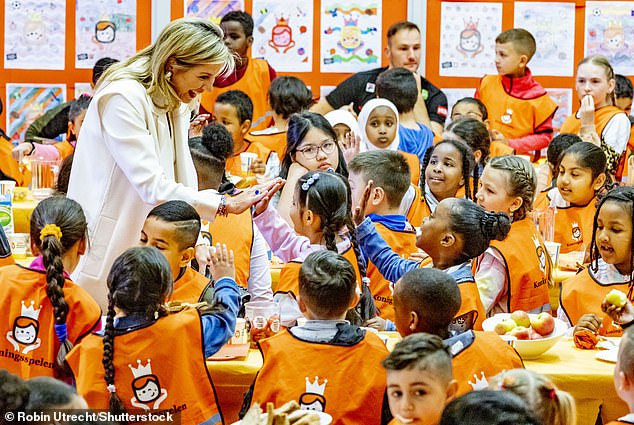 Good job! Maxima kept spirits high during her sporty morning today, while the young pupils gathered around her