At 6-foot-3 with athletic skills, Hamilton Southeastern High School junior outside hitter Lauren Harden is a dominant force on the volleyball court.

“She is a dynamic athlete,” Royals Coach Jason Young said. “She has always been a tremendous Attacker and a force to be reckoned with.” 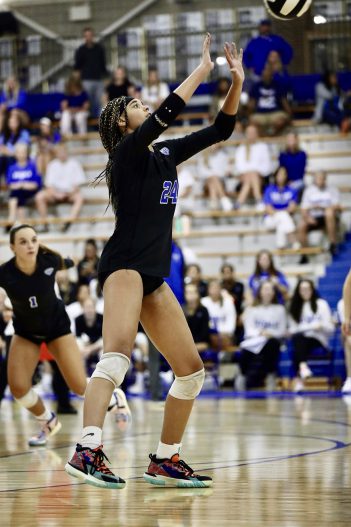 “We definitely think there are things we can work on, but I’m pleased with our growth,” said Harden, a three-year starter who also plays right-side hitter for the Royals.

The Royals have only one senior, so Harden said Juniors have helped with the leadership.

“We’re always open to feedback from everyone,” Harden said. “For me, personally, I knew I wanted to be a big leader on the team this season. I’m trying to lead by example and have a positive attitude with everyone on my team.”

Young said Harden has always been a good leader.

“I have seen her become a great leader this year,” Young said. “She is a team-first kid, which can be a rare trait these days. She has always worked hard to improve her ball control.”

Harden said she has made improvement in her back row play

“I’ve been working on getting down on my serve/receive,” she said. “With hitting, it’s just been able to hit anywhere. My goal is to give 110 percent in practice or games. If I’m having an off-game, I want to contribute in other different ways.”

As a team, Harden said the Royals are concentrating on improving their defense.

“We want to hold each other accountable for that,” she said.

Harden, a first-team all-state player as a sophomore, was invited to the USA Volleyball National Team Development Spring Training Series in May in Chicago.

“I think it has given her a taste for the level of play that the national team requires,” Young said. “It has pushed her to be a better player and play at a higher level.”

Harden said she always learns a great deal from coaches on the national team.

“We talked about what I need to do to make the national team and how hard I need to continue to work if that is something I want to do in my future,” she said.

Harden took swimming lessons and competed in races when she was younger.

“I tried tennis for a while, it wasn’t my favorite,” she said. “Then through intermediate school, I did track. But I started playing volleyball when I was 7, so I stuck with that. I loved it the most. The only time I did basketball was in elementary school with the YMCA before- and after-school program and we’d play knockout or something. I’ve just always been a volleyball person.”

Favorite movie or TV show: Anything with Marvel characters