Ontario Tech University is set to welcome the top university and college badminton players to Oshawa this March.

The Ridgebacks have been named host of Badminton Canada’s 2022 YONEX University & College National Championships. The three-day tournament will be held March 18-20 at the Campus Recreation and Wellness Center.

“We’re excited to showcase Oshawa and Durham Region to the top university and college badminton players in the country,” said Ontario Tech athletic director Scott Barker. “We hope each of the student-athletes enjoy their experience, but we also look forward to welcoming members of the community to watch this elite level of badminton in Oshawa.”

The full championship schedule will be available in March once teams and athletes have been confirmed.

Jasmine Groleau of the women’s curling team and Levi Ogbonna of the men’s basketball team have been named the Ontario Tech athletes of the week for the period ending February 27.

Groleau, a first-year kinesiology student, had a positive showing at the OUA championship in Kitchener, exhibiting leadership and composure as a skip of a very young team at their first OUA championship.

Ogbonna, a third-year criminology and justice studies student, stepped up in the Ridgebacks only game of the week, as well as their first home game of the semester. He finished with 14 points, seven boards, while also adding five assists with two blocks against the Queen’s Gaels.

Ontario Tech’s student-athlete of the week award is presented by Subway located at 2069 Simcoe Street North in Oshawa. 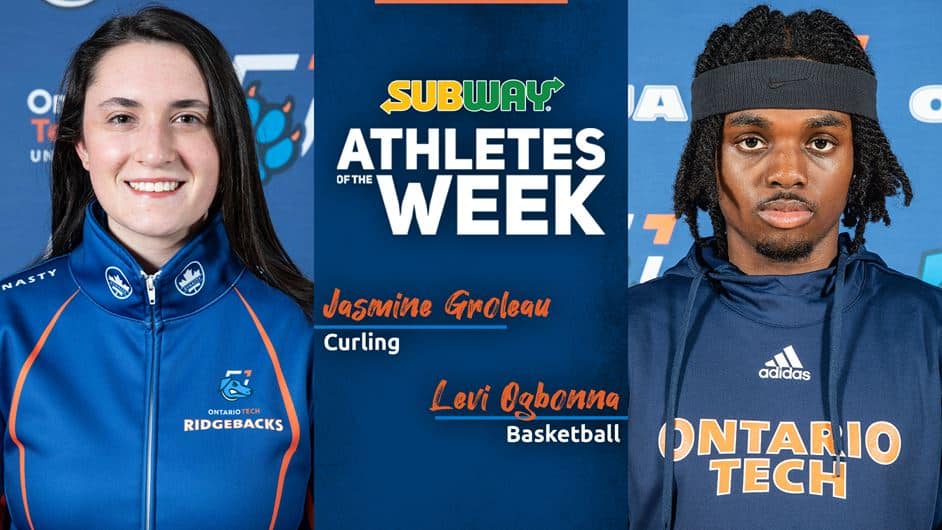 With a full roster of first-year players, the Ontario Tech women’s curling team went into the OUA championship this year looking to gain experience, but also show they can compete with other schools around the province.

“All in all, it was a great experience for the team,” said head coach Mike Stauffer. “We learned a lot as a team and each player learned a lot about themselves. I’m so proud of each one of them. It was a great weekend to build off and they represented Ontario Tech with pride and dignity. “

Hosted by the Waterloo Warriors in Kitchener, the championship opened on Friday with the Ridgebacks facing the nine-time champion Laurier Golden Hawks. Laurier was quick out of the gate, going up 6-0 through two, but at the break the Ridgebacks had closed the gap to 6-3. A four-ender and a steal of one by the Golden Hawks brought the game to an 11-3 end.

The Ridgebacks were in tough again on Friday night, falling 9-2 to the Carleton Ravens. After two they trailed 3-1, with Carleton scoring two in back-to-back ends to take a 7-1 lead into the break.

Saturday morning against the Trent Excalibur, Ontario Tech kept things close, stealing one to open the game. After a Trent scored two with a hammer, the Ridgebacks responded with three of their own as the two teams ended up tied 4-4 at the fourth-end break.

Ontario Tech scored one with a hammer in the fifth before the Excalibur scored a deuce and a steal enroute to an 8-5 final.

The final game of the weekend, saw the Algoma Thunderbirds steal their way to a 7-1 victory. After trading points with hammer through the first half of the game, which saw Algoma up 2-1 at the break, they stole in three straight ends to pick up the victory.

Dubbed the 2.22.22 game, the Ontario Tech men’s hockey team picked up a 4-3 overtime victory over the RMC Paladins on Tuesday afternoon.

Played on the second month on the 22nd day of 2022, with puck drop at 2 pm on Tuesday, the Ridgebacks had a number of twos play a part in the victory.

Ontario Tech scored two goals in the second, tying it 2-2 on their second power play goal, which was a kneeing double minor to RMC (2 × 2 minutes).

The game-winning goal by Stephen Calisti was also scored two minutes into the overtime period.

Tuesday’s victory was also the first OUA start and victory for Christian Mattia, who finished the game with 21 saves.

The Ridgebacks followed that game with a pair of road losses on the weekend to the Nipissing Lakers.

With the sweep, the Lakers jump in front of the Ridgebacks in the OUA east division standings. The Ridgebacks are now 10-12 on the season.