own-DESIGNED exhibitions beneath an som canopy

With scenography designed by OWN / Iyad Alsaka and Kaveh Dabiri, the Islamic Arts Biennale celebrates the opening of its first edition in Jeddah. The sprawling 12,000 square-meters of exhibition space are sheltered beneath the canopy of the Western Hajj Terminal, designed in 1981 by Skidmore, Owings & Merrill (SOM)and display a combination of ancient artifacts and contemporary artworks.

The designers note their inspiration from the concept of the Qiblah, and thus manifest as a gradual and directional journey from Darkness to light — all within the Terminal’s ‘desert-like landscape’ that ‘alludes to the journey of Hijrah.’ Now open to the public, the Islamic Arts Biennale runs through April 23rd, 2023.

a gradual journey from Darkness to light

Designing the exhibition spaces for the Islamic Arts Biennale, titled Awwal Bait or ‘First House,’ the Architects at OMA recognize two distinct parts. The group describes the first: ‘A choreographed trajectory through a sequence of newly built galleries allows visitors a progressive sense of orientation as they move from one room to another.

‘Inspired by the concept of the Qiblah — the direction Muslims face when they pray — the exhibits manifest gradually in a journey from Darkness to light, starting in a dimly lit room filled with 17th-century astrolabes — used to calculate the Qiblah — and concluding in the bright space hosting an installation which incorporates the First Saudi Door of the Ka’bah in Makkah, installed during the reign of King Abdul Aziz.’ 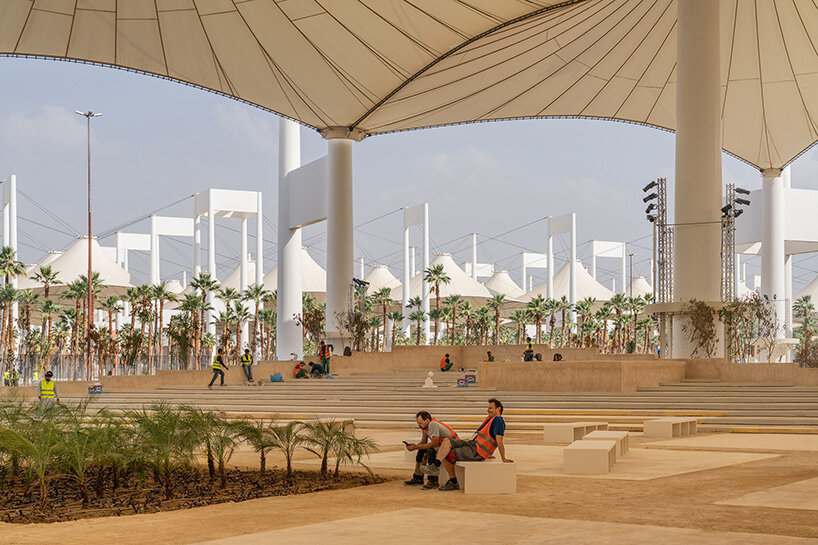 OMA’s exhibition space for the Islamic Arts Biennale next celebrates the SOM-designed Western Hajj Terminal. The team continues: ‘Under the terminal’s canopy, a desert-like landscape alludes to the journey of Hijrah — Prophet Mohamed’s journey from Makkah to Madinah. Slopes and slanted walls of various heights, arranged in relation to the geometry of the existing structure, have been built to display the artworks, creating a sense of exploration throughout the visit.

‘Two freestanding Pavilions act as reference points in the open landscape, exhibiting artefacts from Makkah and Madinah. In contrast to the rough atmosphere outside, the exhibits in the two Pavilions are Embedded in a bright, diaphanous screen wrapping the Perimeter of the walls.’ 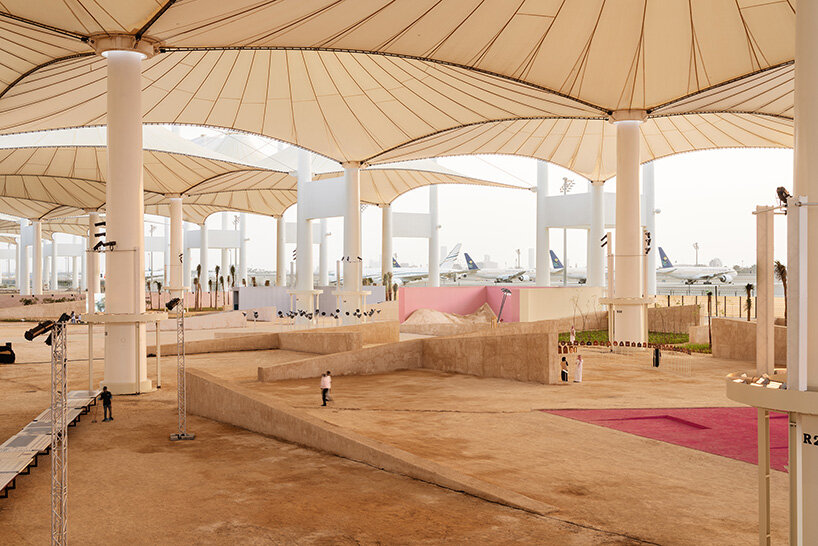