FORMER FIFA referee Dermot Gallagher insists St Mirren’s second goal against Celtic should have been disallowed – as CQN stated in our match report only minutes after Sunday’s game.

The Whistler agreed with us that Paisley striker Jonah Oyunga should have been penalized for a blatant push on central defender Stephen Welsh before he diverted the ball wide of Joe Hart.

Match official Don Robertson appeared to have a good view of the incident – ​​as CQN images showed – but had no hesitation in awarding the goal in the 53rd minute to add to Mark O’Hara’s opening effort just before the interval.

SHOVE OFF…Stephen Welsh is sent Flying as Jonah Oyunga diverts the ball past Joe Hart for St Mirren’s second goal. Referee Don Robertson appears to have a good view of the incident. 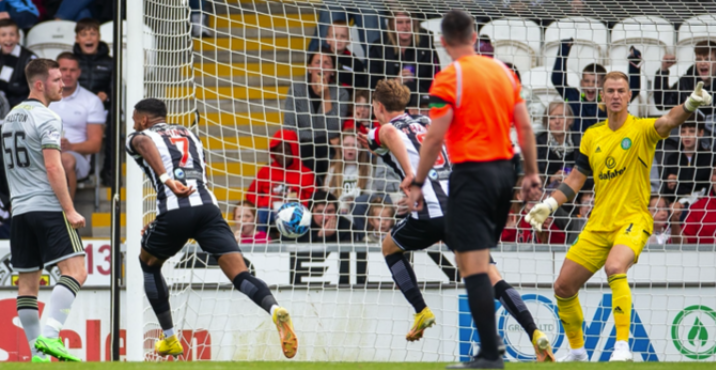 HEY, REF…Joe Hart protests to match official Don Robertson, but his appeals are ignored with Saints being credited with a crucial goal.

Gallagher, looking again at the incident for Sky Sports’ Ref Watch, said: “I think he (Oyunga) gets lucky. From the other angle you see he pushes Welsh in the back, he pushes him away.

“Joe Hart has the perfect view, he has the view the referee wants.

“I think if he’s got that view, he gives a foul. It comes off Ayunga’s shoulder, so he got doubly lucky.

“I think that would be disallowed (with VAR).”

CQN‘s match Reporter stated unequivocally: “After a misguided clearance by (Callum) McGregor, it was (Curtis) Main who nodded the ball across for Jonah Oyunga to knock an effort wide of (Joe) Hart from close range, but it was clear the Saints striker had pushed Stephen Welsh before he got the final touch.

“The two-handed shove in the back gave the frontman time and space to capitalise. Neither referee Don Robertson, who had a clear view of the incident, nor his Assistant saw anything untoward and the goal stood.”

It just wasn’t Celtic’s day in Paisley on Sunday.