Another week, another slate of tight contests and down-to-the-wire finishes in the NFL.

Eight of Sunday’s 12 games were decided by one score, and five were decided in the final two minutes of regulation or in overtime. Atlanta, Kansas City, Las Vegas, Philadelphia and New England all delivered in the clutch.

Chiefs Rally to defeat Chargers on the road

We saw front-runners strengthen their positioning, some upsets here and there, and a few compelling performances by teams fighting to force their way into the playoff picture.

Here’s a game-by-game, team-by-team rundown of some of the biggest lessons and observations from Sunday’s Week 11 games.

Kansas City: This is Patrick Mahomes’ league. When the Chiefs got the ball back with 1:46 left on the clock, you knew it was coming. You knew Mahomes would deliver. Cool as could be, masterful in his delivery, ballgame. It’s what Mahomes does. Of course, the winning connection was Mahomes to Travis Kelce with 31 seconds left. But the Chiefs have to be encouraged by the many contributions from all of the youngsters working to establish themselves as Playmakers in the offense. … Meanwhile, on the other side of the ball, Chris Jones isn’t getting nearly enough recognition for the dominant season he’s delivering to key Kansas City’s defense. His second sack of the game (ninth of the season) couldn’t have been more clutch. … Finally, so much for the rest of the AFC West threatening Kansas City’s supremacy. The 8-2 Chiefs have now swept the second-place team in the division and hold a three-game lead over the Chargers and a five-game lead over the Raiders and Broncos.

Mahomes and Kelce have done it again!

Los Angeles: Justin Herbert will one day join that elite Echelon of Mahomes, Josh Allen and Lamar Jackson. He continually came up big for his team, but a fourth-quarter interception sealed the loss. … If only he could have a fully healthy supporting cast. If only this weren’t the constant theme for the Chargers, week after week, year after year.

Dallas: Which is more impressive: The way Dallas’ defense — led by Micah Parsons and Dorance Armstrong (two sacks each) and Trevon Diggs (shutting down Justin Jefferson) — absolutely throttled the Vikings offense? Or the way Tony Pollard torched Minnesota’s defense for 109 receiving yards and two touchdowns and another 80 rushing yards? Playing like this, the Cowboys can go toe-to-toe with anyone in the conference.

Minnesota: We finally professed faith in the Vikings, and this is how they rewarded us: By yielding seven sacks, Converting just one of 11 third downs and mustering only 183 yards of offense while letting the Cowboys move the ball at will. SMH.

NFL Week 11 takeaways: What happened to the Giants? How good are the Cowboys?

Cincinnati: It’s not often that a team can rack up 37 points and 408 yards minus its top wide receiver (Ja’Marr Chase) and after losing its top running back (Joe Mixon) for much of the game due to a concussion. But the Bengals’ depth — running back Samaje Perine had three receiving touchdowns, and wideout Tee Higgins had 148 receiving yards — is that rich, and it’s why they’re still considered contenders despite some hiccups.

Pittsburgh: A healthy TJ Watt is a welcome development for Pittsburgh. The Steelers did well to hang with the Bengals. But the second half was full of blown opportunities and the same crippling shortcomings that have and will continue to plague this team.

Las Vegas: It’s about time that Josh McDaniels realized that he could feature both Josh Jacobs (24 carries for 109 yards) and Davante Adams (seven catches, 141 yards, two touchdowns) in the same game. Derek Carr had only his second 300-yard day of the season, and McDaniels got some revenge on his former team as his Raiders snapped a three-game losing streak and improved to 3-7.

Denver: Leaving no stone unturned, Nathaniel Hackett gave up play-calling duties. But aside from Russell Wilson completing a season-high 77 percent of his passes, it was more of the same as the Broncos failed to top the 20-point mark for the eighth time this season. Denver fell to 3-7 after a breakdown by a usually stout defense allowed the walk-off touchdown by Adams.

Detroit: Don’t look now, but the Lions are finally putting things together. Make that three straight victories, three more rushing touchdowns for Jamaal Williams (who leads the league with 12) and three takeaways for a once toothless defense. The Lions (4-6) just might treat us to a good game against the Bills on Thanksgiving Day.

New York: The Giants, Losers of two of their last three and now 7-3, are coming back down to earth. Only 22 rushing yards for Saquon Barkley and 44 pass attempts for Daniel Jones just isn’t the recipe for success.

Baltimore: Sometimes, especially on weeks when your quarterback misses time with a stomach bug, you have to prove you can win ugly. The Ravens did just that, leaning heavily on a defense that forced three turnovers (two interceptions and a fumble recovery) and denied Carolina on nine of 12 third downs.

Caroline: Stat line for Baker Mayfield (now 1-4 as a Panthers starter): 21-for-33, 196 yards, no TDs, two interceptions, 54.6 passer rating. Think Seattle is breathing a sigh of relief? And as The Athletic‘s Joseph Person asks: Is it time to give Sam Darnold a shot? 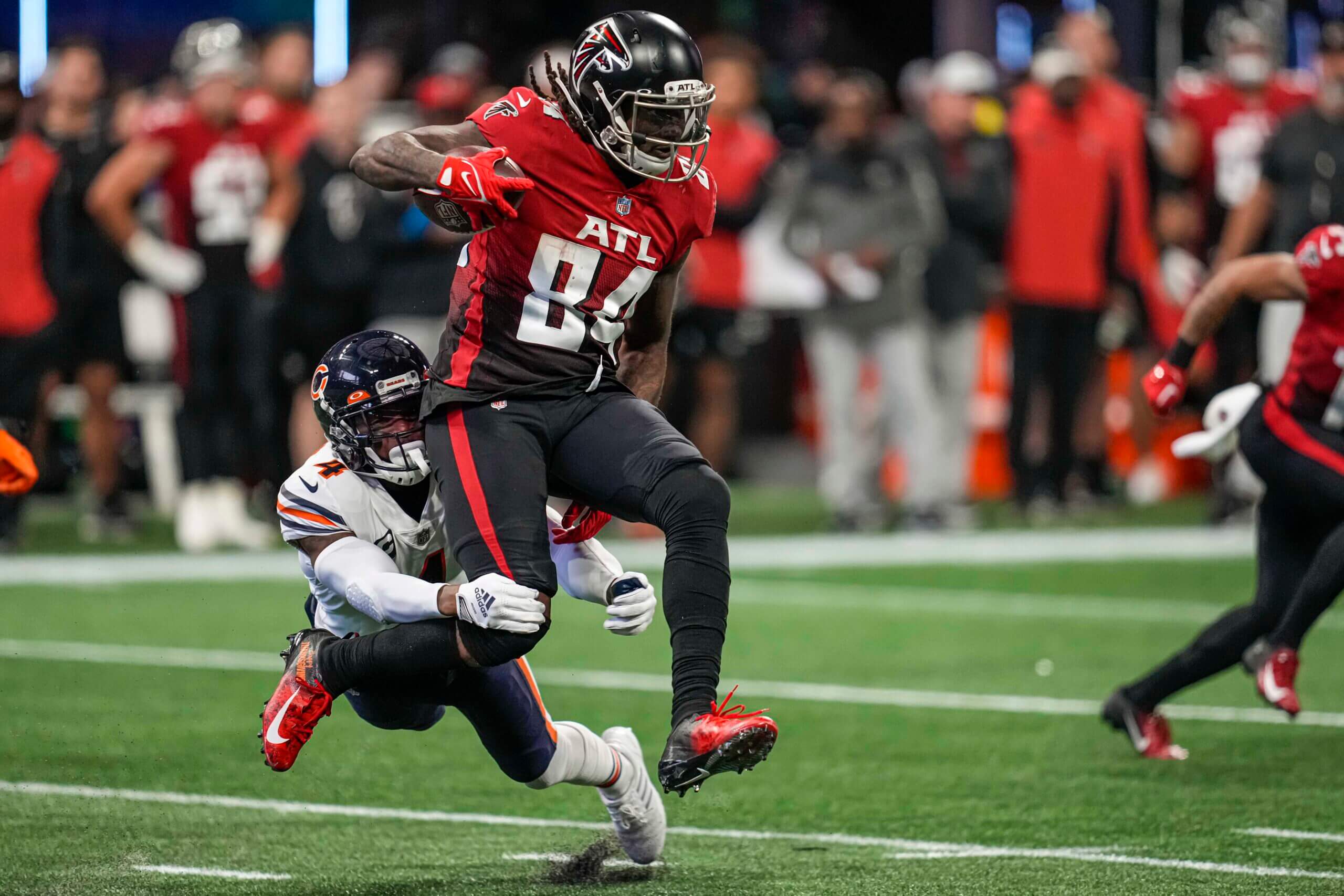 Atlanta: Outside of Cordarrelle Patterson kick returns (he now owns the NFL all-time record with nine returns for a touchdown), there’s not much pretty about what the Falcons do. But, at 5-6, they’re finding a way to stay on the Fringe of the NFC playoff hunt.

Chicago: Justin Fields delivered more exciting plays with his legs and his arm (rushing and touchdown pass), but he threw a killer interception for a second straight week. Potentially even more concerning is the injury Fields suffered to his non-throwing shoulder. The Bears will hold their breath while Awaiting a prognosis.

Buffalo: The Bills wisely looked to ease pressure on Josh Allen, who had fallen into the trap of playing Hero ball and forcing things, thus recording three straight games with multiple interceptions. Devin Singletary (86 yards and a touchdown against Cleveland) and James Cook (also 86 yards) proved themselves capable of larger roles in the offense. Allen threw for a pedestrian 197 yards and a touchdown, but sometimes less is more. 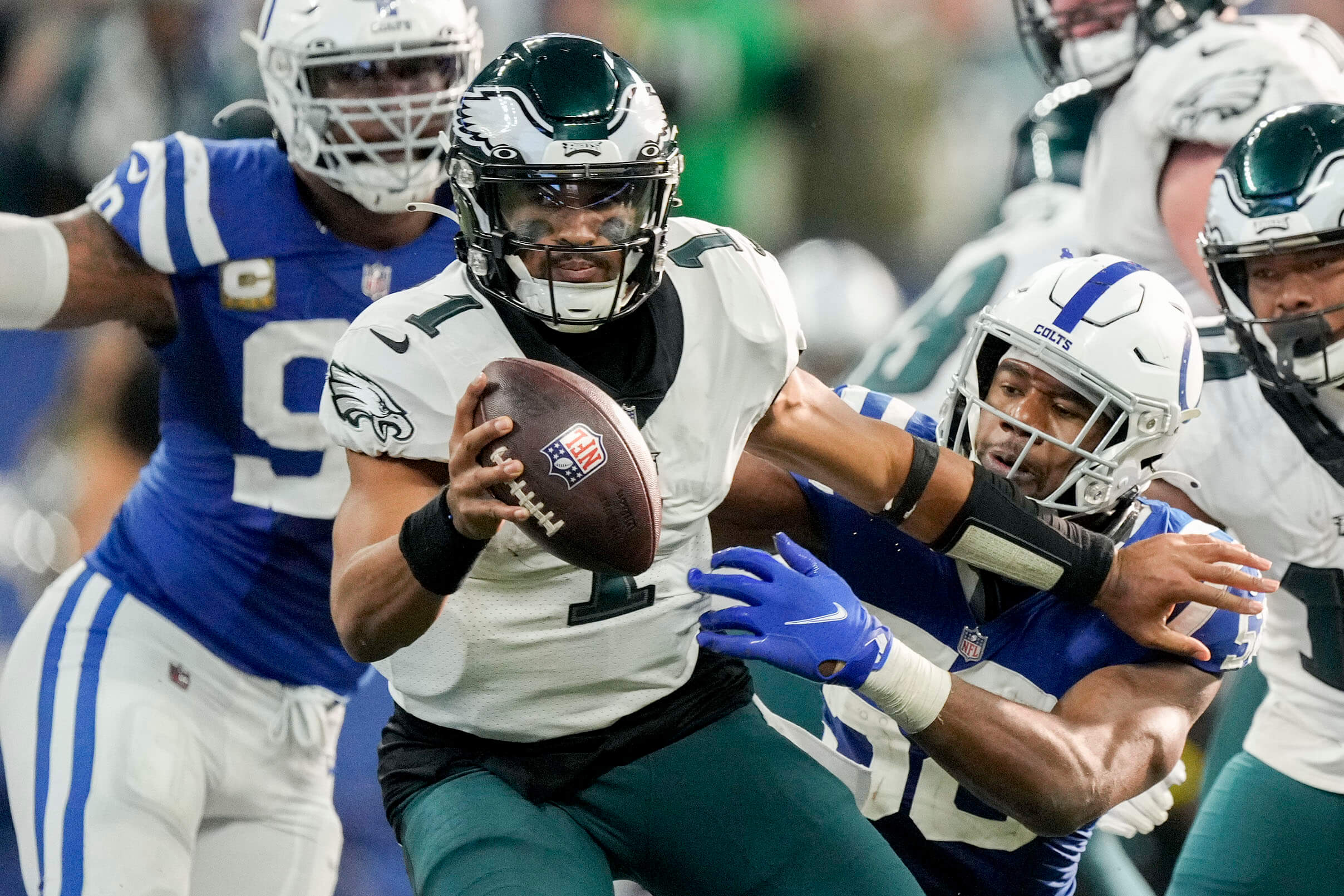 Jalen Hurts and the Eagles eked out a one-point win to avoid a second straight loss. (Robert Scheer/USA Today)

Philadelphia: Signed to help address a weakness on the interior of the Eagles’ defensive line, Linval Joseph and Ndamukong Suh made their presence felt, combining for a sack and seven tackles. After a shaky start, the Eagles defense shored things up, holding the Colts to nine points in the final three quarters. If the new pieces can further jell with the holdovers, Philly might have everything it needs defensively. … With an authoritative 11-play, 75-yard game-winning drive, Jalen Hurts and company appeared to get their groove back while improving to 9-1.

Indianapolis: The Commanders gave the NFL the blueprint, and the Colts tried their damnedest to make it two losses in a row for the Eagles. Ultimately, though, Indianapolis got away from the recipe: Jonathan Taylor managed only 20 second-half rushing yards and Matt Ryan had to pass too much. Exhibiting the same inconsistencies from his predecessor’s watch, Jeff Saturday’s bunch collapsed, getting outscored 14-3 in the fourth quarter. Saturday is now 1-1 as interim head coach.

New England: With a strong defense and special teams unit, Bill Belichick always have a chance. And he still has the Jets’ number. Make that 14 straight wins over the Divisional rivals after Belichick’s defense held New York to only 2 Offensive yards in the second half, and his special teams unit produced an 85-yard Marcus Jones punt return for a touchdown with five seconds left to bail out New England’s own anemic offense. Now 6-4 and winners of three straight, the Patriots remain in the thick of things.

New York: Zach Wilson’s roller-coaster season reached a low point: just 77 yards on 9-of-22 passing for a season-low 50.8 passer rating, wasting a strong effort from his defense. Wilson didn’t throw three interceptions like in his last outing against the Patriots, but he did take four sacks, converted only three of 14 third downs for first downs and failed to get his unit beyond its own 35-yard line the entire second half .

New Orleans: It’s not as pretty as when Sean Payton ran the show, but the Andy Dalton–Taysom Hill Platoon duty at quarterback worked well enough to keep the Rams defense off-balance. The approach also appears to have eased pressure on Dalton, who had one of his most effective outings of the season. He completed 84 percent of his passes (21-for-25) for 260 yards and three touchdowns while sporting a season-best 149.6 passer rating.

Los Angeles: Remember when Sean McVay grabbed the mic at the Rams’ Super Bowl Parade and chanted “Run it back! Run it back!” at Aaron Donald, who was contemplating retirement at the time? Losers of four straight and now 3-7, the Rams appear destined to become the first team since the 2016 Broncos to miss the Playoffs after winning the Super Bowl. Those Broncos had the excuse of losing Peyton Manning to retirement. McVay’s Rams have had very little go their way and now lose Matthew Stafford to concussion protocol again.

Washington: It’s not always about physical traits and draft pedigree, as Taylor Heinicke continues to prove. Ron Rivera’s postgame announcement that Heinicke will remain the starter and Carson Wentz his backup was a no-brainer. Heinicke is 4-1 as a starter, the offense is more balanced and more effective, Scott Turner’s play-calling is more creative and the Commanders are 6-5 and very much alive in the NFC.