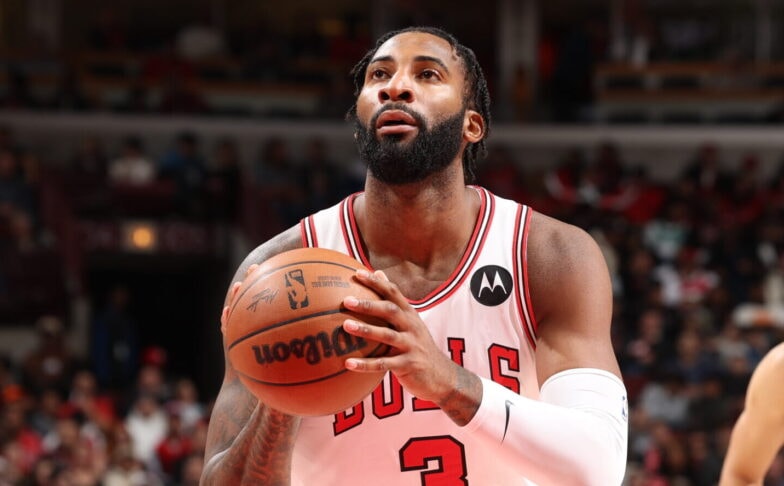 Andre Drummond is averaging 8.6 rebounds per game this season.

Despite Thanksgiving being in our rearview mirror, stuffing is still on the menu. Specifically, it’s time to serve up some “stat stuffers” still available in most Yahoo Leagues and can help Fantasy basketball Managers in specific categories.

Konchar is one of the best rebounding guards in the league. The problem has been he wasn’t getting enough minutes at the beginning of the season to be a viable Fantasy option. However, all of that changed when Desmond Bane went down with a toe injury that was expected to sideline him for 2-3 weeks.

Konchar has started all five games with Bane out, logging 33 minutes per contest. With the added playing time, he averaged 9.0 rebounds. He’s been helpful in other areas, too, with 12.2 points and 2.2 3-pointers per game. However, if you’re specifically hunting for rebounds, Konchar is a great option until Bane returns.

The Bulls improved their depth at the center position by signing Drummond this offseason. Despite only logging 20 minutes per game with the Nets and 76ers last season, he provided 7.9 points and 9.3 rebounds per game. He’s taken on an even smaller role on the Bulls behind Nikola Vucevic, playing 16 minutes per game.

Even in his limited minutes, Drummond is averaging 8.6 rebounds. He has appeared in 12 games, six of which he hauled in at least 10 rebounds. If anything were ever to happen to Vucevic, Drummond could provide monster production. Even if Vucevic stays healthy, Drummond is someone to target for Fantasy Managers in need of rebounds. It’s also worth noting that free-throw shooting has been an issue for him in the past, but he is shooting 71.4% from the Charity stripe this season.

An injury to Cade Cunningham (lower leg) has put a damper on what was an exciting offseason for the Pistons. There have been reports that he has a stress fracture in his Shin and that missing the entire season because of surgery is a possibility. If that were to occur, the Pistons would have difficulty improving their 5-15 record.

If there is a bright side to Cunningham being out, it’s that Burks is getting more playing time. If he can be productive, he could become a valuable trade option. So far, so good, with him averaging 16.6 points and 2.1 3-pointers over seven games. While he provides minimal rebounds and assists, he’s a viable option for those who need a boost in the scoring department.

The Celtics have depth issues up front. Danilo Gallinari Tore his ACL before the season began, and Robert Williams III (knee) has yet to appear in a game. That has forced them to rely more on smaller lineups, especially since they have several talented guards. They have also given extended run to Williams, who is logging an average of 29 minutes per game.

With Williams playing so much, he has put up some of the best numbers of his career. He’s been particularly potent from deep, averaging 1.8 3-pointers per game on 45.5% shooting from behind the arc. That kind of efficiency will be difficult to maintain over the long haul, but he did shoot 41.1% from behind the arc while averaging 1.4 3-pointers per game last season. Robert Williams isn’t expected to return until sometime in January at the earliest, so Grant Williams should remain in his expanded role for a while longer.

Hayes has yet to live up to the expectations of being the seventh pick in the 2020 Draft. He’s shooting 36.3% from the field for his career, including 27.4% from behind the arc. Until he makes strides in that department, it will be challenging to have much faith in him in Fantasy basketball.

Even with that in mind, Hayes is at least worth considering for those who need assists. With Cunningham hurt, Hayes has averaged 5.3 assists over the last seven games. The key was he averaged 28 minutes per game. He only shot 36.9% from the field during that stretch, though, so Fantasy Managers should only add him for assists if they can also afford to take a hit with his field goal percentage.

The Rockets are assembling a talented young core. They hope Eason, who was selected with the 17th pick in the 2022 Draft, will be a part of it for years to come. However, they have been easing the rookie into the league, leaving him to log just 18 minutes per game.

Even with his limited playing time, Eason is averaging 1.5 steals per game. He has logged at least 20 minutes in a game seven times, totaling 14 steals during that span. The Rockets have a 3-14 record, so they clearly have a way to go with their rebuild. They don’t have a ton of veterans on the roster, but they could look to move Eric Gordon at the trade deadline. They could also simply look to give Eason more minutes to help with his development. He can assist Fantasy Managers with steals in his current role and could become a difference-maker in the category if he receives more minutes in the second half of the season.