Wahoo surprised the tech-savvy cycling world at the Time Trial World Championships by giving everyone a sneak peek at its new product, the KICKR ROLLR.

Editor’s note: This article was originally published on BikeRumor.

But as it turns out, this highly anticipated piece of kit would be launching simultaneously with another new Wahoo product – the new POWRLINK ZERO power meter pedal.

That’s not by accident, as you’ll need a power meter on your bike to get the most of these new smart rollers.

What Is the Wahoo KICKR ROLLR?

The Wahoo KICKR ROLLR combines a smart trainer, rollers, and a super-fast warmup setup. Wahoo describes the KICKR ROLLR as its most straightforward unit to set up. Just set the length of your bike, clamp in your front wheel, place the rear on the rollers, and ride.

There are no adapters or spin-down calibrations – just set up and ride. The best thing about it is it’s just as easy to remove and get outside. 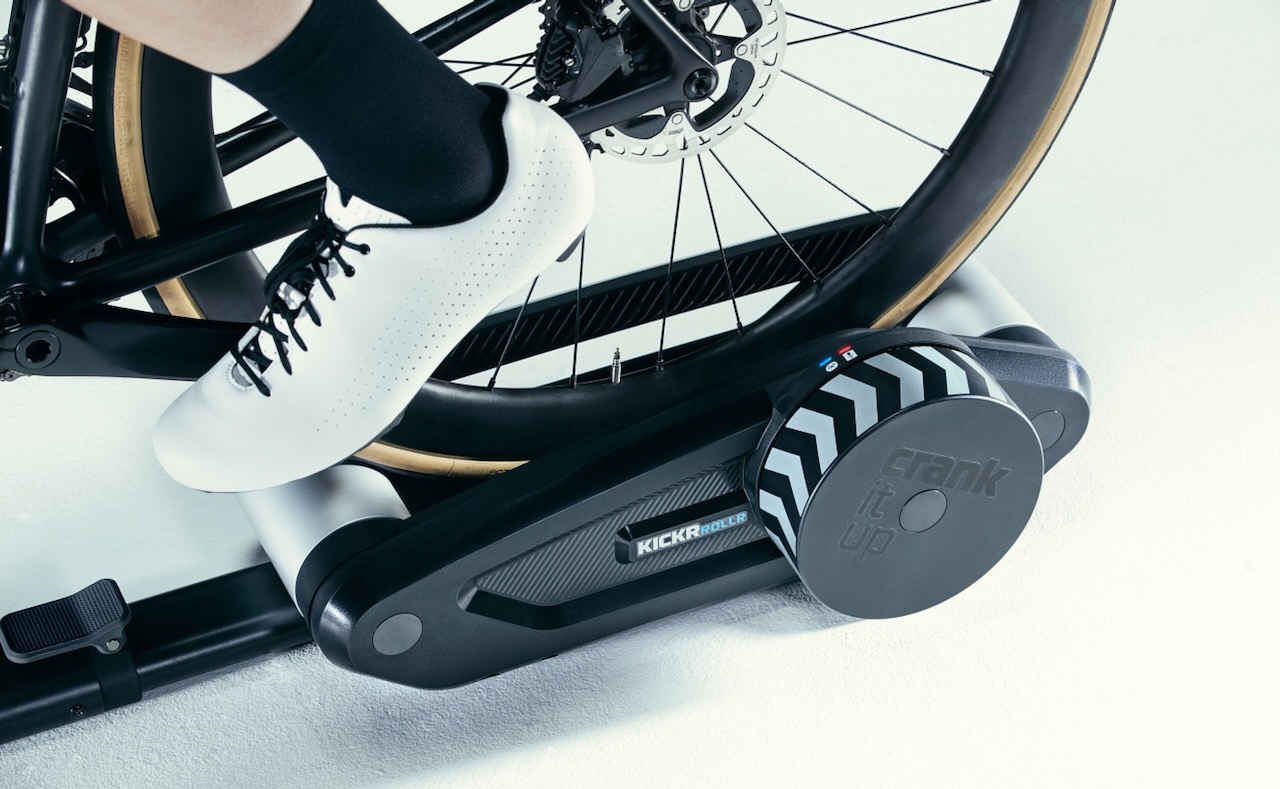 Wahoo saw the demand for a trainer unit that required minimal setup and gave natural sway like rollers – but not exactly rollers. The dual alloy tubes give just enough room to sway side to side but not enough to wreck in your living room.

Yes, the roller will be more audible than your direct-drive trainer, but Wahoo finds the freedom from swapping the rear wheel enough of a compromise to justify.

This roller and wheel clamp setup allows the rider to go from warmup to race in seconds flat – unless you plan on a wheel change. 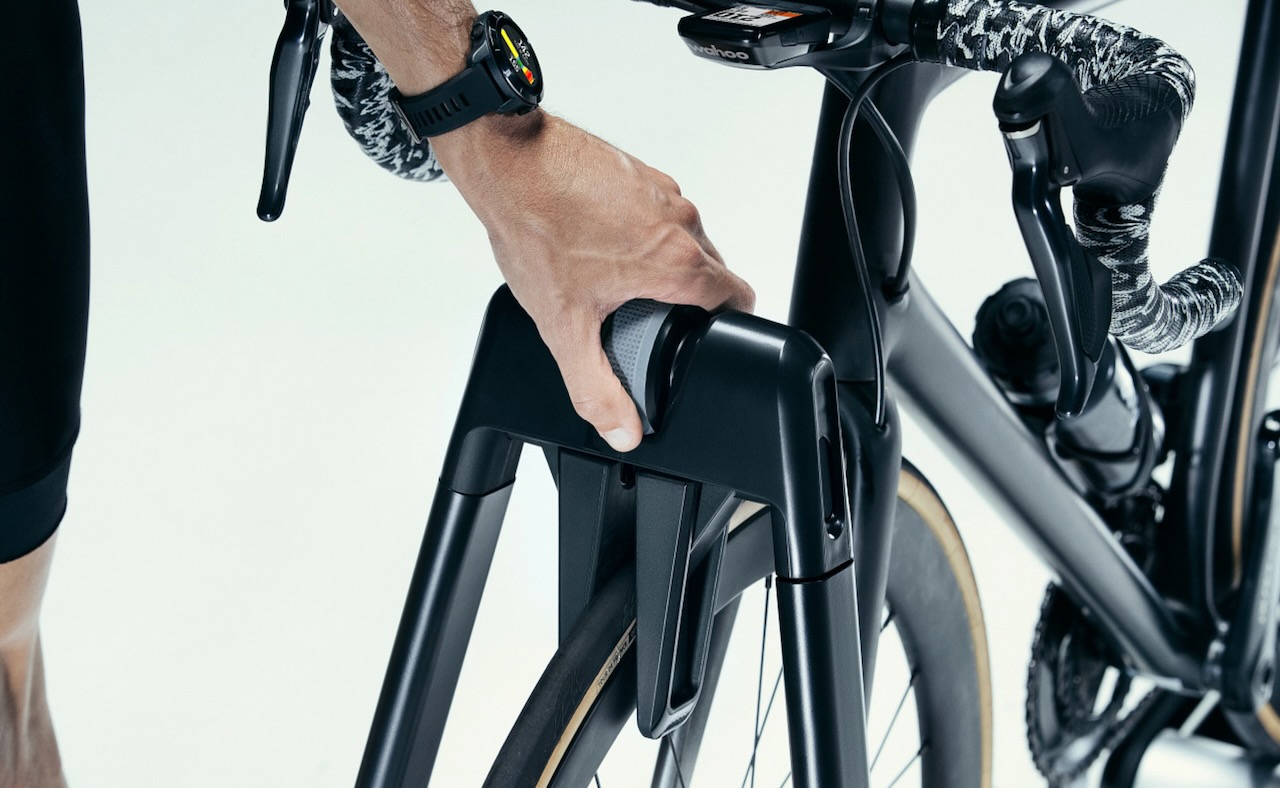 “The ability to easily take your bike on and off the trainer while enjoying the singular ride feel of rollers really sets KICKR ROLLR apart.” 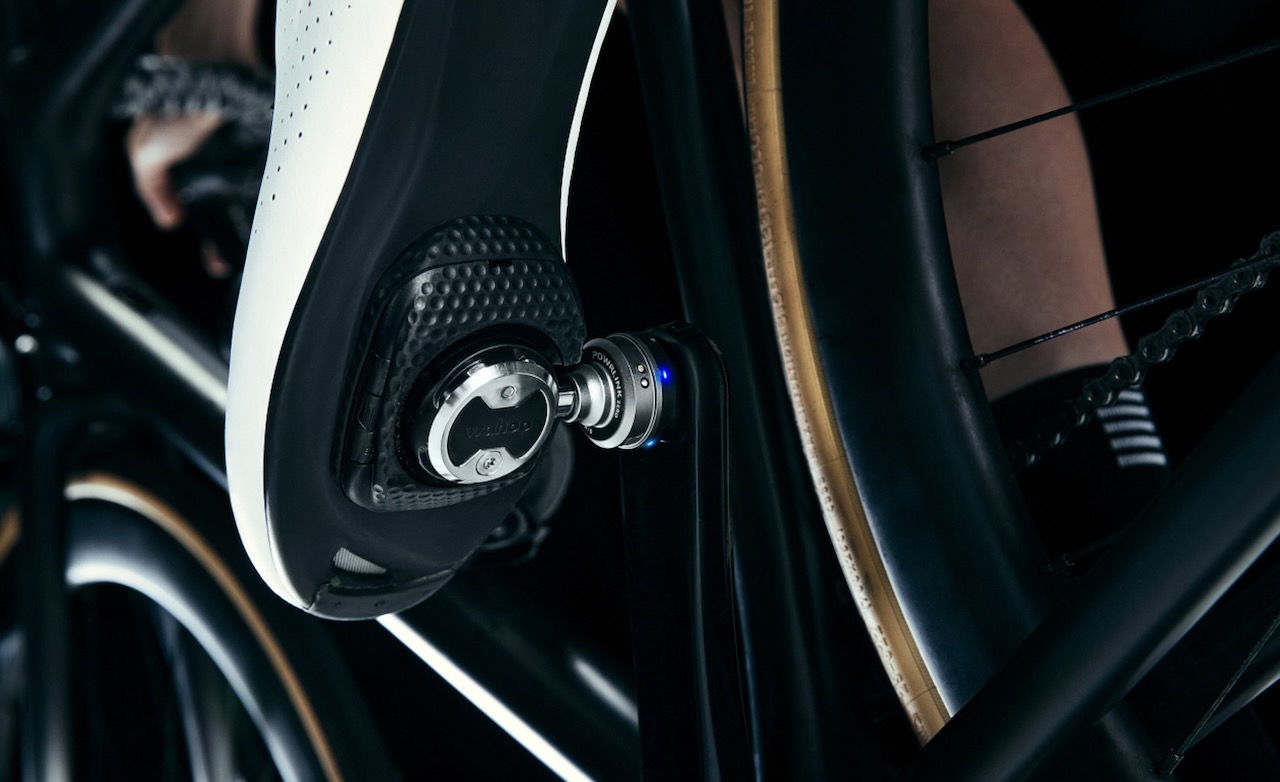 How Do the Power and Resistance Work?

The Wahoo KICKR ROLLR employs a 10-pound flywheel, magnetic resistance, and programmable wattage to set it apart from others in space.

The KICKR ROLLR piggybacks power measurements from the power meter on the bike you’re using, relaying the information to the unit and adjusting for the workout or virtual world you’re adventuring in. It will do most of the smart trainer work of the other KICKR products, but this unit processes power a bit differently. 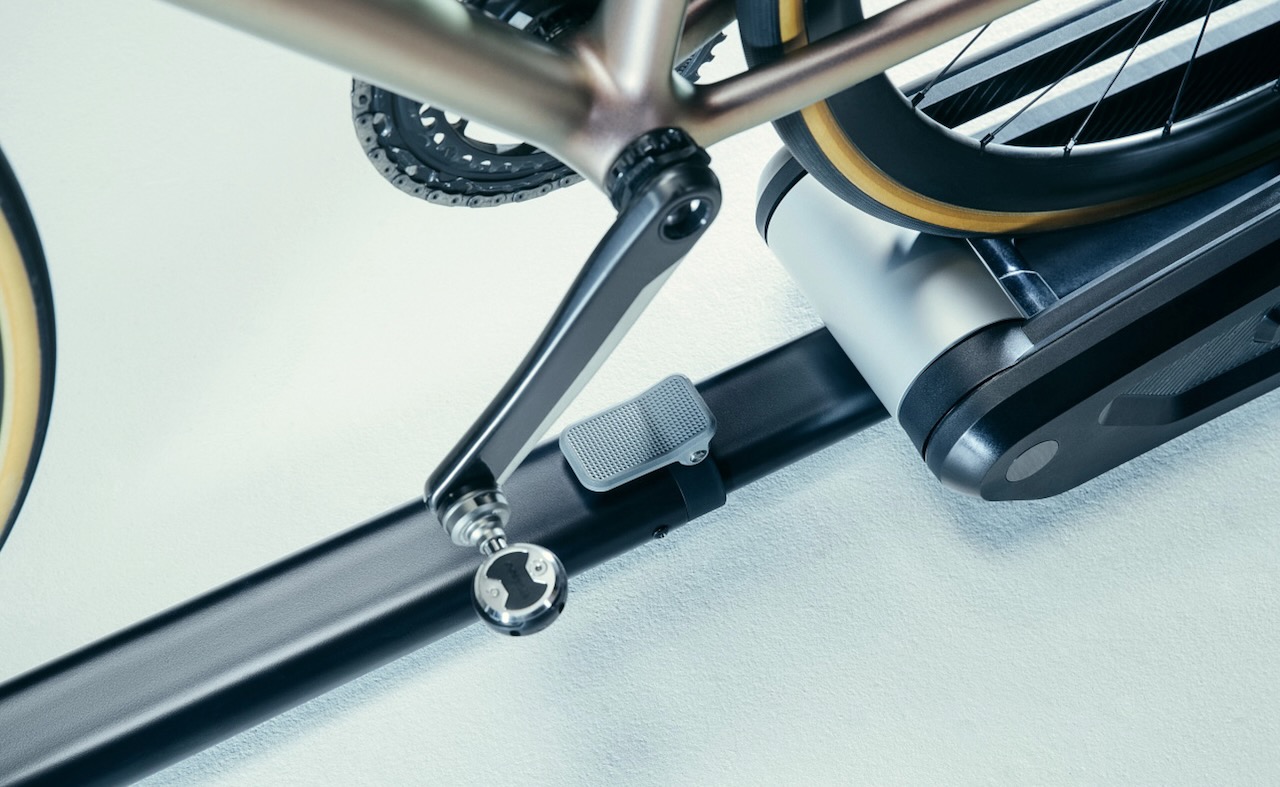 Can I Use It to Warm Up at Races?

Yes. Unlike the other Wahoo KICKR direct-drive units, the KICKR ROLLR offers a progressive zero to 450 W of resistance and 1: 1 mapping. So a warmup before the race will be more than achievable.

The unit itself weighs 50 pounds, which is not exactly light but not bad overall. It does not come with a traveling case, and the arms are less than compact, but we’ll have to see when our unit arrives how it is in the field. 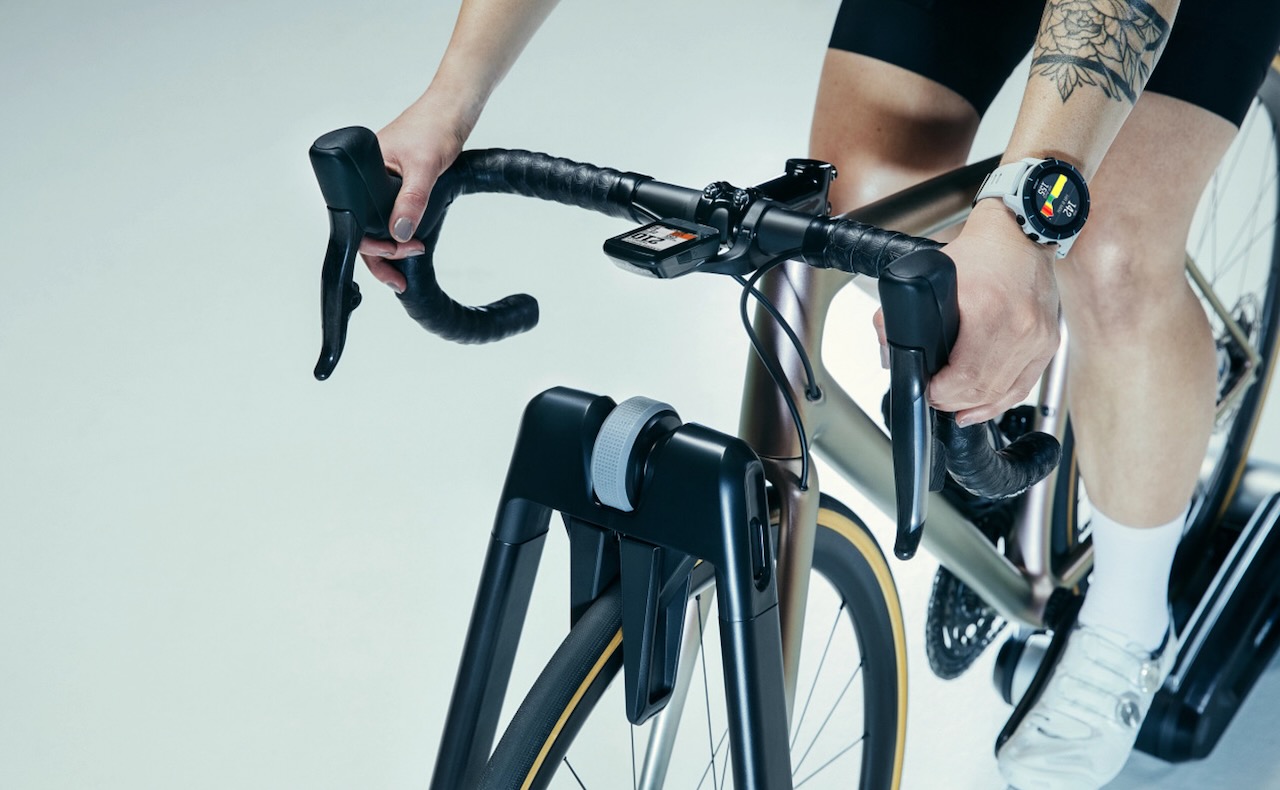 The KICKR ROLLR looks like an excellent option for a road bike, gravel bike, and time trial pre-race warmup. The bike size compatibility is pretty vast at 1,100 mm in length (set by the Wahoo sliding wheel holder), so most road, gravel, and time trial bikes should be passable.

The Wahoo Safety Tire Gripper makes sure the front wheel stays in place without busting out the toolbox. The gripper holds the wheel tightly for aggressive sprinting and out-of-the-saddle efforts, so we assume it should be solid for Zwifting.

The Safety Tire Gripper does have a maximum tire size, though, and will work with tires up to 2.1 inches (53 mm), making this primarily a tool for drop bars and old-school XC bikes. 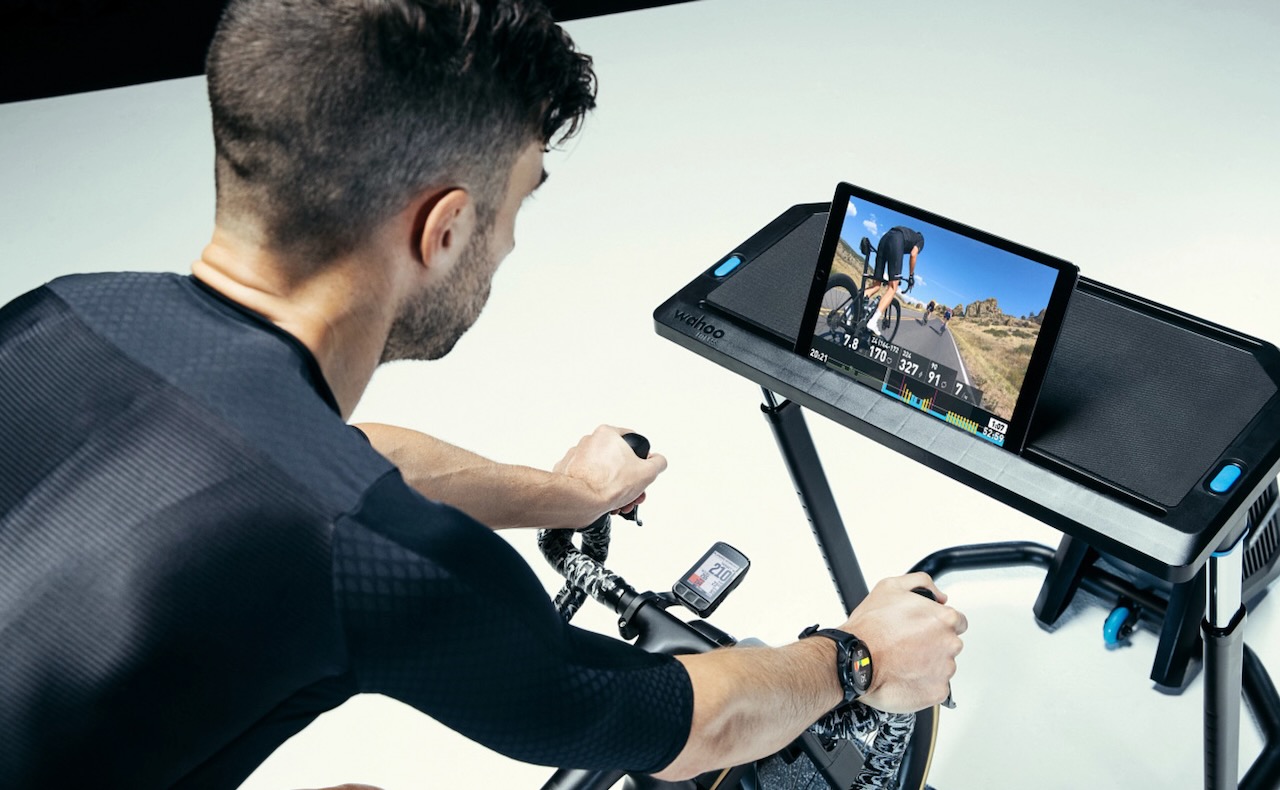 Can I Zwift Race on the Wahoo KICKR ROLLR?

You can undoubtedly race on the new KICKR ROLLR platform, But the max resistance is 1,500 W, so plan your race tactics accordingly. The alloy shell rollers should not slip under hard efforts, but it would be best to use trainer-specific tires just for the surges. 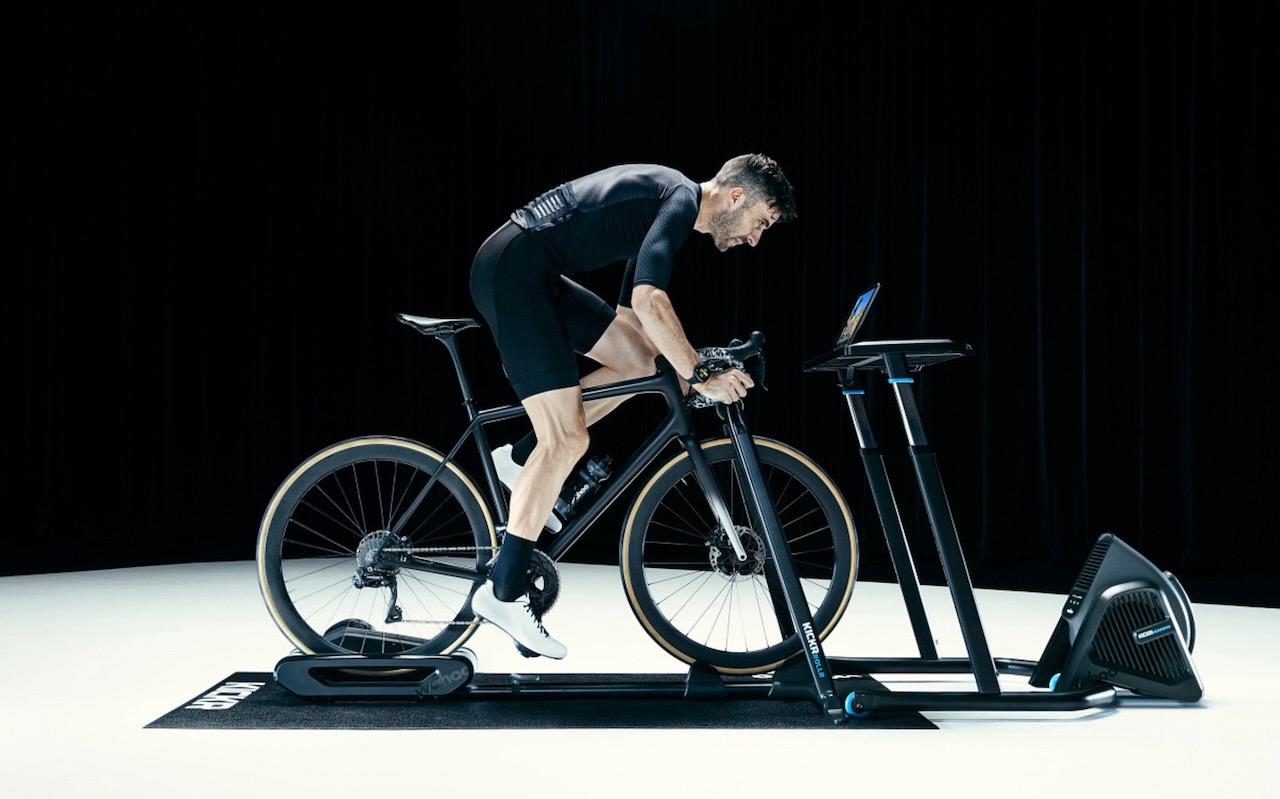 The Wahoo KICKR ROLLR is available for purchase now at WahooFitness.com or through authorized Wahoo retailers.

Check out WahooFitness.com and check back for a full review for more information.