The Minnesota Wild spent this season rewriting the franchise record books both from a team perspective (most points, most wins, etc.) and an individual one (start with Kirill Kaprizov’s stats). But none of that will matter if the Wild doesn’t end their six-series playoff losing streak and get past the St. Louis Blues in what promises to be a brutal (but beautiful) test of mental and physical toughness.

The Wild have benefited from Bill Guerin’s roster reconstruction, but the general manager did not remake this team in order to set regular-season records in wins and points. He did it so the Wild could be well positioned entering the playoffs and then have guys in place who were capable of winning when hockey is at its best and toughest.

Guerin knows what it takes to hoist a Stanley Cup – he won two as a player and two as an executive in Pittsburgh – and is well-acquainted with the massive price that must be paid by anyone who isn’t happy with anything but 16 wins over four series.

That is why he bought out winger Zach Parise and defenseman Ryan Suter last summer, despite the money left on their once-lengthy contracts that were supposed to turn around the franchise. It’s why former general manager Paul Fenton began the process of cleaning out the locker room and Guerin continued it. It’s also why Guerin watched his team lose back-to-back one-sided games against Calgary less than a month before this season’s NHL trade deadline and decided the Wild needed to get bigger, tougher and better in goal.

Guerin knows that indecision, or worrying about the public popularity of a player, is a recipe to mediocrity. In sports, and especially playoff hockey, nice guys (at least on the ice) do finish last and that isn’t part of the Wild or Guerin’s plan.

But this also means this Wild team enters the playoffs with immense expectations that the Xcel Energy Center will be the place to be in June. The Wild haven’t gotten past the second round of the playoffs since making an improbable run to the Western Conference Finals in 2003. The Wild were only in their third season and no one thought they had a chance to get past the uber-talented Colorado Avalanche in the first round. 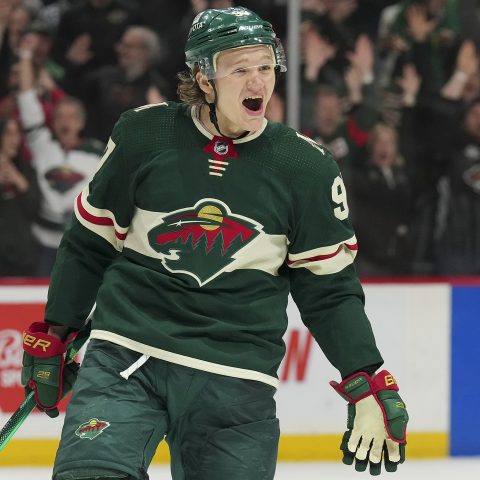 How many times will this scene be repeated in the postseason? The answer will determine how far the Wild advance in the Stanley Cup playoffs will go. (MHM Photo / Rick Olson)

A failure to get past the Blues this spring will be considered a major disappointment for both the Wild and their fan base. It’s not that St. Louis isn’t a good team. The Blues, who won the 2019 Stanley Cup, had 311 goals this season, one more than the Wild and one less than the first-place Avalanche. St. Louis’ blue line is no longer as good as it was in 2019, but everyone on their top three lines has 20 or more goals. The Wild also has plenty of offensive fire power, although it’s concerning that the Blues’ power play (27 percent, second in NHL) is superior to the Wild’s (20.5 percent, 18th).

That is going to have to change in the postseason and that will need to start with first-line winger Kirill Kaprizov and second-line winger Kevin Fiala. Both had incredible regular seasons, with Kaprizov setting franchise marks with 47 goals and 108 points and Fiala scoring 33 goals and 85 points.

But as Kaprizov learned in the Wild’s seven-game loss in the first round against Vegas last season, time and space disappear in the playoffs and driving a star player to the point of frustration is the goal. Kaprizov only had two goals and three points and was a minus-3 in the seven games, and Fiala had a goal and an assist and was a minus-6. The Blues will focus on Kaprizov, but that doesn’t give him a pass to disappear and Fiala’s line, which includes Frederick Gaudreau and rookie Matt Boldy, must thrive if they aren’t the focus of the Blues’ defensive effort.

It’s also why Guerin acquired fourth-line winger Nic Deslauriers near the deadline in order to give the Wild even more of a physical presence than they had with guys like third-line wingers Marcus Foligno and Jordan Greenway. The message to the Blues: You want to try to beat us with your skill? Bring it on. You want to make this about toughness? We can do that, too.

The Wild and Blues will be meeting in the playoffs for the third time. Minnesota won in six games in 2015 before being swept by the Chicago Blackhawks, and then lost in five games to the Blues in the first round in 2017. This season, the Wild and Blues met three times, with St. Louis. Louis winning the Winter Classic on Jan. 1, and then recording two overtime wins in April in St. Louis. The Wild does have the advantage of home ice, given they had four more points than St. Louis. 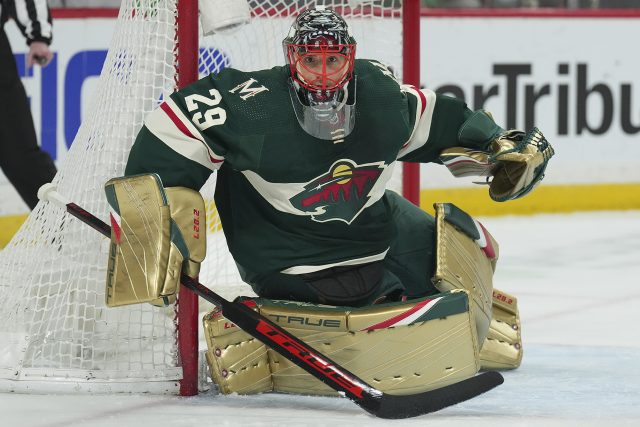 Minnesota’s goaltending tandem of Marc-Andre Fleury (pictured) and Cam Talbot ranks among the league’s best and both should see a lot of ice time if the Wild make a deep postseason run. (MHM Photo / Rick Olson)

The most important thing in this series will be who gets the better goaltending. That’s why Guerin obtained veteran Marc-Andre Fleury at the deadline to pair with Cam Talbot. Talbot has been brilliant since Fleury arrived, while Fleury cooled off after a great start during his time in Minnesota. Wild coach Dean Evason surprised no one on Sunday by declining to name who will start Game 1 on Monday night at Xcel Energy Center.

No matter who that goalie is, he and the rest of his teammates will enter the postseason with the expectation that Guerin has given them everything they need to play deep into the spring. The rest is up to them.