THERE has been loads happening in the Women’s game over the past week, highlighted on the international front by world number one Jin Young Ko extending her lead in the rankings and the two Malaysians playing in the United States, Kelly Tan and Alyaa Abdulghany, both making the cut.

Nearer home, South-East Asian (SEA) Games-bound Jeneath Wong (as mentioned elsewhere in The Star) kept her preparations well on track for Vietnam with a solid performance in the Women’s New South Wales (NSW) Open at Coolangatta & Tweed Heads Golf Club. At the same tournament, two other Malaysians, Genevieve Ling and Ainil Bakar featured – the former making the cut and the latter just missing out.

Ko stretched her lead to 1.42 points over Nelly Korda in the Rolex Women’s World Golf Rankings, following her runner-up finish in the Palos Verdes Championship at Palos Verdes Golf Club in California. She was edged out by a single stroke by Marina Alex. The American claimed her second LPGA Tour title when she broke the deadlock with a two-putt birdie on the par-5 16th hole in the last round. The South Korea took her average points tally to 9.85, while Korda is on 8.43.

Winner of the Olympic gold in Tokyo last year, Korda has not played since her first three events of the season. Last month she announced on social media that she had been diagnosed with a blood clot in her left arm. She underwent surgery and said rehab would start soon thereafter.

There have been no further updates on her condition that we know of, but the world of golf, and especially fans of the Women’s game, wish her a speedy recovery and return to the Tour.

Also at the Palos Verdes Championship, Kelly started well enough to put in a solid performance – a top-20 real possibility. However, she faded away on the final day. 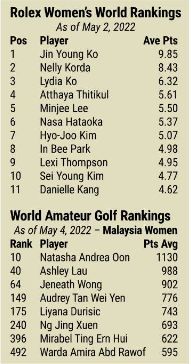 At the Epson Tour’s Garden City Charity Classic at Buffalo Dunes in Garden City, Kansas, Alyaa signed for rounds of 77, 71 and 72. She finished tied for 51st in a four-over 220, in the three-day 54-hole event that American Gabriella Then won with a 12-under 204 total.

Alyaa, 23, has now made the cut in three of the five events she has played in her first full season on the Epson Tour.

Her best showing yet was her opening tournament, the Carlisle Arizona Women’s Golf Classic where she shot a nine-under 279 total for a share of 19th place.

Speaking of Jeneath’s preparations for the SEA Games, at an event co-sanctioned by the Ladies European Tour (LET) and WPGA of Australia professional, and with no attempt to pre-empt the Malaysian Golf Association (MGA), a local senior commentator said the The 17-year-old would learn a lot from these sort of experiences.

“Her recent form, going by her results, shows that she is on the right track, ahead of the SEA Games in Vietnam. And with this, it is no surprise to hear that the MGA are pinning hopes on her for a medal in Hanoi, ”he added.

“Jeneath is fortunate in some respects, in that she resides in Melbourne and is on the doorstep of competitions like the Women’s NSW. It is these sort of tournaments and other leading pro / Amateur events that MGA should be targeting for our Juniors to gain exposure.

“Now with borders opening up across the globe, the Covid-19 Pandemic can no longer be accepted as an excuse. Our Juniors need international exposure if we are progress in golf like others – Thailand for an example.

“The bigger picture will show you that Thailand, our neighbors, have four players in the Women’s world top-51. This includes Atthaya Thitikul, who is only 19 years old and is number four in the rankings. Those are the sort of goals that we (Malaysians) should be setting. But that is only if we really want to succeed, ”he added.

For the record, Thailand’s Patty Tavatanakit, who won her first LPGA tournament and Major at last season’s ANA Inspiration Championship that led her to Capture the Rookie of the Year award, is ranked 14th in the world.

Former world number Ariya Jutanugarn is 40th, while her sister Moriya is 51st in the rankings.

Thailand have two other players in the top-100, Pajaree Anannarukarn (62) and Jasmine Suwannapura (97).