Like many other activities, the Northumberland Strait Shooters Archery Club’s 3D Shoot for Cancer event was put on hold during the last couple of years due to COVID. But now, the archers have their arrows ready and are poised for a fun day while raising money in the fight against breast and prostate cancer.

“My dad passed away from prostate cancer in October of 2016,” said Jan MacDonald, who, along with her husband Matt and Allie DeCoste, are part of an organizing committee for the event.

“He wasn’t into archery but loved anything where people were having fun. So we (she and Matt) started on our own the first year (2018); we did an archery shoot at the Hector Arena with 30 or 40 foam targets – 3-D animal targets. ” 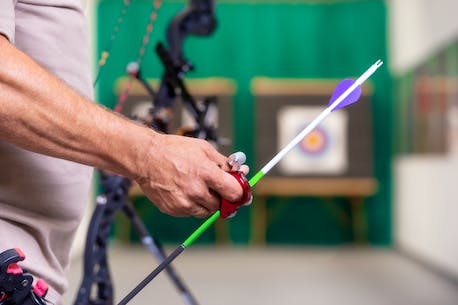 Then, with club support and raffle tickets already sold on donated quilts, it looked like 2020 could be an even better year and that is when they decided whatever money they raised would be split between the two forms of cancer through local support groups; the Women Alike Breast Cancer Educational and Support Group, and the Prostate Cancer Support Group for Pictou County.

“So we set that (quilt raffle) money aside until we could have the event again which is, finally, this year,” Jan said. “We have about 71 pre-registered already and we can have about 160, that will be our maximum for the day.”

3-D Shoot for Cancer will take place on April 30 at the Hector Arena in Pictou. Spectators are welcome and the arena’s canteen services will be available.

“We open at 7:30 am,” Jan said, adding the first line of shooters will be at 8:30 am “The second line is 10:15 am, then the first line shoots again. You shoot, take a break, and then shoot again. Then they total their scores and the highest score wins. ”

She added the event is broken into categories depending on bow types and ages.

Jan said she helps with registrations and that it’s heart-warming to see the support shown for a cause that has impacted her family so deeply.

Matt said they’re excited to be hosting again after a two-year hiatus.

“It’s great to see everyone come together to support two great support groups as the funds raised will help individuals who have fallen on hard times,” he said. “Most participants know or have known somebody who has or had prostate or breast cancer.”

DeCoste said she is grateful to be part of the committee for the event.

“Having friends is currently battling breast cancer, it feels good to give back,” she said. “Especially after two years of isolation, we can’t wait to get out and have a good time for two great causes.”

Interest in the sport

Jan said her introduction to the sport came from Matt who bought his first bow and arrows about 15 years ago.

“He started and became addicted,” she said. “He hunted, went to these 3-D outdoor competitions, and I would go with him. So then I went and bought a bow. ”

Jan said she quickly upgraded her first bow after falling in love with the sport as well. Now, their two girls participate in archery.

“They’ve been doing archery since they were little,” she said.

More information can be obtained by emailing [email protected]phoning 902-331-1356, or checking out the event’s Facebook page under ‘Shoot for Cancer in support of prostate and breast cancer.’