As they say in the investment world: “Past performance does not guarantee future results.” But when we look back at the resume of a champion golfer like Scottie Scheffler or Max Homa, it’s pretty clear that in golf, the odds of continued success for a rising star are a lot higher than in the ever-volatile stock market.

Over the past year, one of the names we see come up in search results now often is Amari Avery, of Riverside, California. Her co-starring role in the Netflix documentary “The Short Game” put Avery on the map as a Phenom – a young “Tigress” her father called her – and her play at the last two Augusta National Women’s Amateur Championships (along with her other junior, Collegiate, and Amateur success) has only kept Avery in the Spotlight. 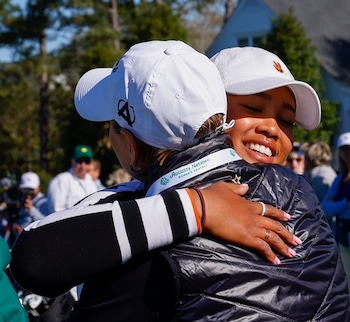 Although she missed the ANWA cut by a single shot in 2021, and had to settle for a ceremonial round at Augusta National, in 2022 she easily advanced to the final round and finished T4, 4-shots ahead of her “The Short Game” co -star Alexa Pano.

At the ANWA, Avery was clear that even though the tournament wasn’t in her childhood dreams, she fully understood its magnitude:

“Honestly, I would say I never saw it coming,” Avery told the Golf Channel. “This [tournament] has only been around for four years, so obviously this wasn’t like a dream of mine or anything. But this is a huge event. It’s probably the biggest amateur event in women’s golf, I would say. “

Just a freshman at USC, Avery isn’t taking the meteoric rise to the top of Tiger Woods. But she already has two individual Collegiate titles to her name, and was named to the 2022 All-Pac-12 Conference first team. She currently sits at No. 36 in the Golfweek / AmateurGolf.com Women’s Rankings.

Avery didn’t win the three-straight USGA Juniors and follow that with another three US Amateurs. (As if anyone else could). She does, however, have a number of similarities to Tiger. They were both born on December 30 and share an Orange County, California upbringing to a Black father and Filipino mother. Her father Andre even relied on the Elder Woods’ book “Training a Tiger: A Father’s Guide to Raising a Winner in Both Golf in Life,” for valuable advice.

Things seem to be working out very well.

One of Avery’s junior titles was at the Mack Invitational, a tournament founded by Cameron Champ to Honor his late grandfather with a focus on identifying Talented and racially-diverse players. (Her Younger sister Alona won the 2022 title). Avery met tournament host Cameron Champ – also of mixed race – during the 2021 tournament. Champ is an Advocate for growing the number of minority golfers, and opportunities like the Mack Invitational give these players something to strive for.

“To be able to be a part of, and play in, the Mack Champ Invitational is very special to me,” she said. “It’s an Honor to be a part of such a diverse field of golfers. This event represents so much for young people in the game, especially because it allows them to have a high-level experience.”

With her continued popularity and success on the course, it’s no wonder that Avery has signed NIL deals with Bank of America and the Angel City Field Club, the LA-based professional soccer team.

“I’m so excited to be an athlete Ambassador for @weareangelcity !,” said Avery in an Instagram post. “I don’t know much about soccer (yet!), But I love how #AngelCityFC is all about Empowering female Athletes – in all sports.”

Avery figures to be a big part of USC’s run at the NCAA Women’s title. And she won’t have much of a chance to catch her breath afterward – Amari has been named to Team USA for the Curtis Cup, to be played at Merion in June, and will travel to Switzerland to represent USA on the Palmer Cup team on July 1-3.

Golf has another awesome female role model in Amari Avery – and while I’ve never watched “The Short Game” I’m planning on pulling it up on Netflix before watching the NCAA Women’s season come to a close. Check out the movie trailer below.