By Tyrell Feaster For Dailymail.Com

FOX Sports was once again slammed by soccer fans after sharing an incorrect Round-of-16 bracket on live television Friday.

And soccer fans were quick to call out the network on social media after seeing the network’s latest error. The network’s coverage has already dropped out multiple times and it missed the start of the second half of Denmark’s Clash with Tunisia.

One Viewer wrote on Twitter: ‘There is at least one mistake on every broadcast, wrong tables are common.’

Another said: ‘At this point they just don’t care,’ while one more viewer called FOX’s coverage ‘amateur hour.’

As one fan pointed out, it is not the first time fans have been bothered by one of the broadcaster’s mistakes.

Fans took to social media to call out FOX for the mistake, after showing the R16 incorrect bracket

American fans previously harped on FOX’s coverage after the feed went out multiple times during the pregame build up to USA vs. England, and left viewers looking at a blank screen for minutes at a time.

FOX Sports, which has the Sole English-language rights in the US, was broadcasting its pre-match buildup ahead of the USA’s Group B rivals England’s game against Iran as part of its double-header before Gregg Berhalter’s team kicked off at 2pm ET.

However, its live feed went dark multiple times, including when it cut to commentators Ian Darke and USMNT Legend Landon Donovan for their pre-match analysis.

Soccer supporters who had gotten up early to watch the 8am ET game were quick to rip into the broadcaster, branding it ‘Mickey Mouse’ coverage.

Fans again bashed the network after FOX caused them to miss several seconds of the second half in the game between Tunisia and Denmark due to a commercial break running too long.

The fans who took to social media to voice their complaints described the network’s coverage as ‘amateurism,’ and ‘pathetic.’ 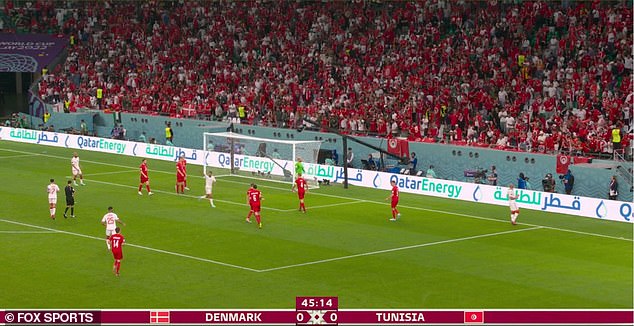