YOKOTA AIR BASE, Japan – The lights come on at 6 pm at a basketball court on this airlift hub in western Tokyo in late February as “Heads Will Roll” by the Yeah Yeah Yeahs churn out of a portable speaker.

The Fuji Flatliners, a women’s roller derby team at Yokota Air Base, start warming up. After a coaching session on blocking, shuffle steps and snowplows, they are skating, cheering and knocking each other down.

“We’re all here helping each other and building each other up,” said Holly Dunn, 42, a native of Rowlett, Texas, and president of the recently revived Flatliners. “And some of these women are starting from not even knowing how to skate. And then you see them grow in this community, and even become one of the strongest players. ”

The Flatliners are one of three women’s roller derby teams at US military bases in the Tokyo area. After a lengthy pandemic layoff, they’re ready to start trading elbows and insults again. The Flatliners resumed practice again in February.

Dunn’s roller derby persona is “Happy Hollydaze,” because every day empowering women on the rink is a holiday, she told Stars and Stripes on Feb. 28. “I’ve never seen a more powerful group of women,” she said.

The Flatliners meet for practice three or four times a week at the eastside basketball court or a parking lot that is sometimes the motorcycle safety course.

Mimi Torres, 39, a native of Villalba, Puerto Rico, works at the Yokota Airman and Family Readiness Center. As HulkYeahMimi, her roller derby name, she found contentment on the flat track, and the workouts make her feel tough, physically and mentally, she said.

“I am happier now that I found roller derby,” Torres said.

All in the name

Chicago sports promoter Leo Seltzer popularized roller derby in the 1930s, according to a March 2020 article by Gabrielle Puglisi in Smithsonian Magazine. It faded in the mid-1970s. 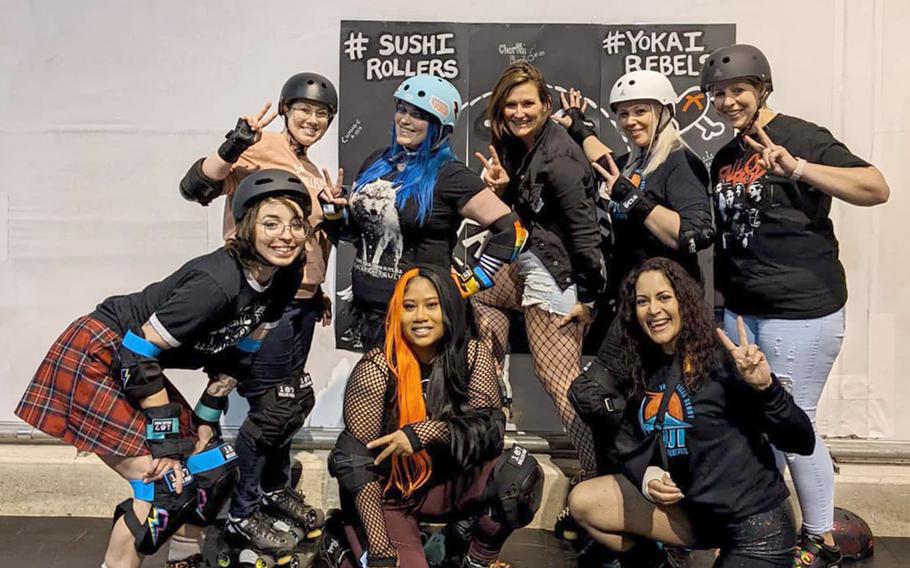 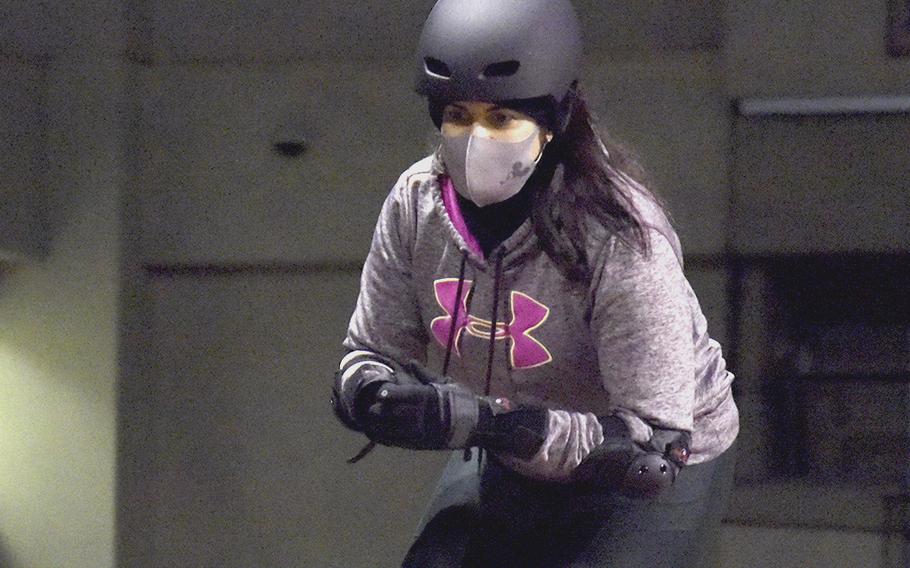 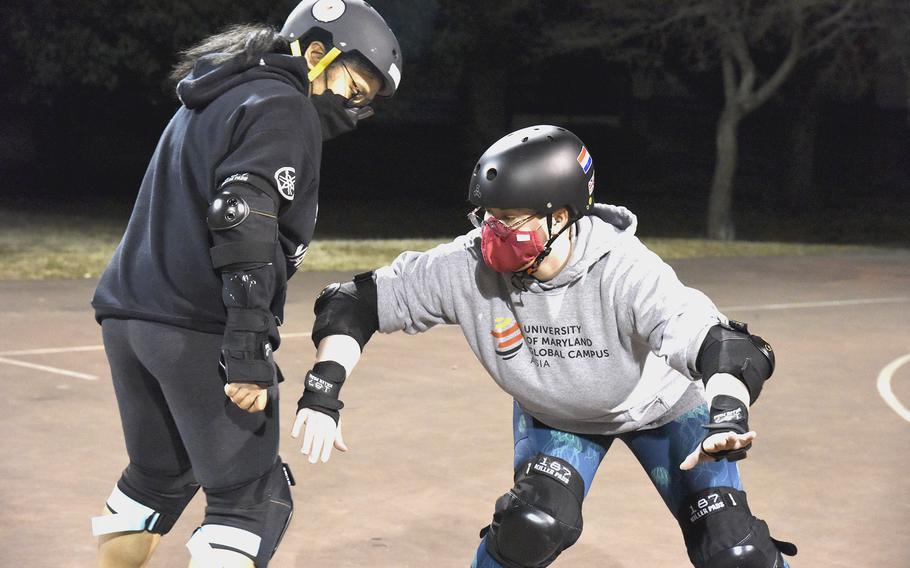 Coach Hannah Howard of the Fuji Flatliners and the Killer Katanas, right, teaches Staff Sgt. Vanessa Seay of the Flatliners how to block during practice at Yokota Air Base, Japan, on Feb. 28, 2022. (Kelly Agee / Stars and Stripes) 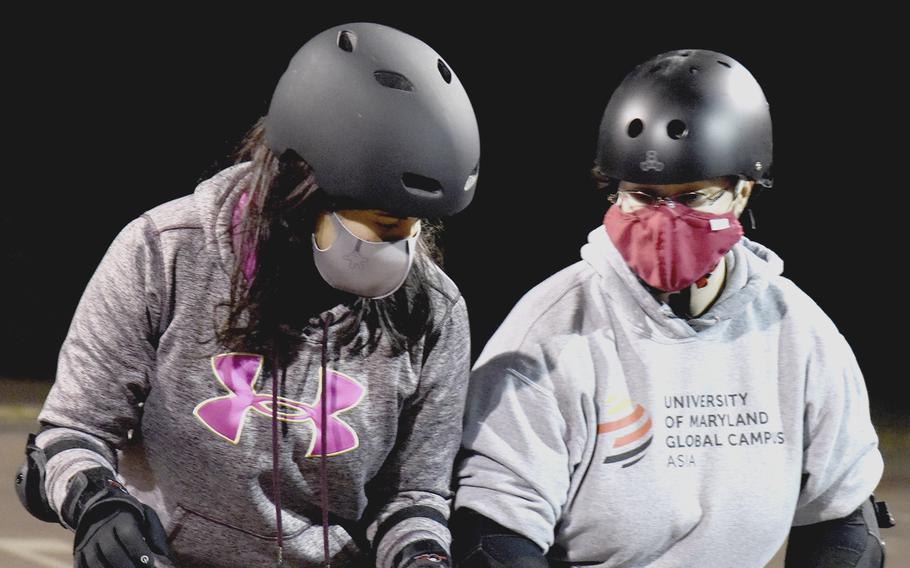 Coach Hannah Howard, right, teaches Mimi Torres how to block with her hips during a roller derby practice at Yokota Air Base, Japan, on Feb. 28, 2022. (Kelly Agee / Stars and Stripes) 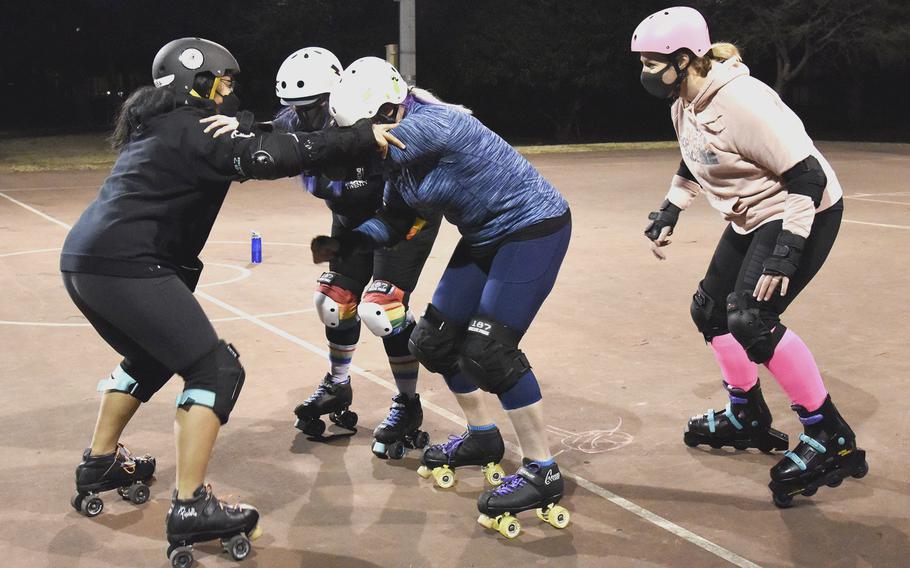 The three teams rolling at US military bases in Japan are planning to meet soon for competitive matches: Yokota’s Fuji Flatliners, the Sushi Rollers from Yokosuka Naval Base near Yokohama and the Zama Killer Katanas at Camp Zama, the headquarters of US Army Japan southwest of Tokyo .

A regular schedule of matches with the two other teams is still in the works, Dunn said Friday. But the Flatliners scrimmage with the Killer Katanas from 10 am to noon April 9 at the old hockey rink at Camp Zama. Spectators are welcome, she said.

The sometime adversaries also socialize and practice together.

“It’s been super fun doing skate nights and training sessions with the other teams,” said Staff Sgt. Vanessa Seay, 29, from Yokota. “I am definitely excited to start organizing bouts with the teams around Japan. They should definitely be worried; we aren’t calling ourselves the Fuji Flatliners for nothing! ”

A team member’s track persona has always been a big deal in the sport. It helps the players forget their day-to-day lives and become someone else on the rink.

“We all come up with our own names,” said Hannah Howard, 33, coach of the Flatliners and Killer Katanas. “Mine is Aris Throttle, and who you become on the track and who you become to your team is a version of yourself that you don’t have to be when you’re at home, with your spouse, with your kids or at work . It’s really, really doing something for yourself, which is nice. ”

Rules to play by

A match is played by two teams of five players, Howard said. Four players are blockers, and one is a jammer who scores points by passing opposing players.

The blockers try to stop the opposing jammer from scoring while helping their own jammer get points. One blocker is the pivot, who acts as the team captain.

To score, the jammer must make one pass through the opposing team within two minutes. The more revolutions the jammer makes, the more points she scores. A match is typically an hour long.

The Yokota team has no assigned positions, Seay said. She’s known as the KnockNess Monster, “since I go by Nessa with my friends,” she said.

“Sometimes I like to go really, really fast if I think I can do it,” she said. “So, I play as a jammer then. And sometimes I just feel like blocking and hitting. ”

The three teams have yet to compile a schedule and find venues for their matches. But they’re practicing for the day they go head-to-head on the rink.

Even though the three teams are rivals, they support each other, she said.

“It’s actually so fun, they’ve all been so welcoming,” Culbertson said. “During COVID we weren’t able to practice and then PCSed players. So, all three teams are just kind of starting up again. ”

PCS means permanent change of station, or reassignment to another military base.

“Everyone has just been so cool and willing to share information and willing to let the other teams come to their events and practices,” Culbertson said. “You know, it’s OK not to like the other team, in between the whistles, but we leave it on the track after that; we’re all friends again. ”