New York City-based Diller Scofidio + Renfro has completed the Prior Performing Arts Center for the College of the Holy Cross in Massachusetts, which features an undulating facade of precast concrete and weathering steel panels.

Diller Scofidio + Renfro designed the campus building as a cultural center and the focal point for student life for the College of the Holy Cross, which is one of the US’ oldest Catholic universities.

Named the Prior Performing Arts Center, the building at the College of the Holy Cross was completed earlier this year and opened to the student community in September.

The 8,000 square-foot (7,800 square meters) facility contains a student center, classrooms, and cultural facilities, including two theaters and an art gallery.

“DS+R has designed the Performing arts center to be an incubator for Multidisciplinary learning and creativity, offering a space for the arts that would be accessible to all members of the community at Holy Cross, in Worcester, and beyond,” said Diller Scofidio + Renfro.

“A physical manifestation of Holy Cross’ commitment to the arts and an integral part of the college’s academic experience, the Performing arts center will support creative collaboration among faculty and students across all academic disciplines.”

The building is located at the highest point in the campus, making it immediately visible from the entrance to the grounds.

It’s made up of four pavilions: a multi-purpose theater, a smaller theater, arts and media studios, and spaces for practice and production.

“The new Prior Performing Arts Center is an uncommon commons,” said Diller Scofidio + Renfro partner Charles Renfro. “The building is uniquely perched on a hill overlooking the campus and Worcester, yet straddles the intersection of multiple cross-campus paths.”

The building’s four wings are laid out like a cross, each of them opening into a central space that acts as a student commons that the team has nicknamed The Beehive.

This atrium-like space contains a cafe but was also designed to accommodate larger events and informal gatherings.

“At the center, the Beehive acts as a visible connective tissue between these pavilions, the public program, and student productions, allowing back-of-house functions to activate the building at all times,” said the studio.

The two Theaters include a 400-seat auditorium, which will be the university’s main concert venue, and a smaller stage with 200 seats for experimental performances.

“Support space including the Foley Scene Shop, Costume Design Studio, recording studio, lighting and set design study, and multi-use spaces to encourage Collaboration among the arts and between the arts and other disciplines,” explained Diller Scofidio + Renfro.

The building’s facade is comprised of precast concrete panels with weathering steel accents. These two contrasting materials curve and straddle each other, forming openings to let in light and create circulation paths.

“The paired walls twist, rise, and interlock, the wall of one Pavilion becoming the roof of its neighbor, forming a chain around the center and creating arched entries directly into the heart of the building,” explained Diller Scofidio + Renfro. 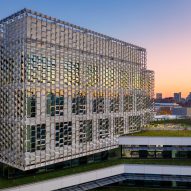 “The opposing precast concrete and weathering steel walls reinterpret the brick and limestone of the historic campus. Taking advantage of the site’s natural beauty, the Center’s design creates a Meaningful Counterpoint to the surrounding campus architecture, both fitting in and standing out on the highest point on campus,” continued the studio.

“The building’s dual identity is also expressed in its materials, which are tough and industrial without sacrificing warmth and comfort,” Renfro added.

Diller Scofidio + Renfro was founded by Liz Diller and Ricardo Scofidio in 1981. It has completed several cultural facilities for Universities around the world, including the David Rubenstein Forum at the University of Chicago, and the Tianjin Juilliard School in northern China.

The photography is by Iwan Baan, unless otherwise indicated.