The College of Saint Benedict and Saint John’s University Athletes will take part in the NCAA competition this week at locations both home and away.

The Bennie softball team found out Monday afternoon it would play host to an NCAA Division III first-round regional this Friday through Sunday at the CSB Softball Complex. Meanwhile, the SJU golf team will be in action at the Division III national meet this Tuesday through Friday at the Mission Inn Resort and Club in Howey-In-The-Hills, Florida.

For the Bennies, who fell 7-4 to St. Olaf in the semifinals of the MIAC Tournament this past Saturday (May 7), being chosen to host came as a pleasant surprise. CSB (28-8) takes on Nebraska Wesleyan (22-14) in the first round of the four-team, double-elimination regional pod at 4:30 pm Friday.

The Prairie Wolves fell 5-4 to Wartburg (Iowa) in the American Rivers Conference Championship game Saturday. Sophomore Hanna Roth leads her team with a .388 batting average, including 12 doubles and 26 RBI. Nebraska Wesleyan’s top pitcher is senior Kailey Meyer, who boasts a 17-7 record with 103 strikeouts and a 1.24 ERA.

Wartburg (27-12) and Illinois Wesleyan (26-13), which defeated North Central 3-2 in the College Conference of Illinois and Wisconsin title game this past Sunday (May 8), are the other two teams in the regional. They meet at 2 pm Friday.

Games Saturday are scheduled for noon, 2:30 and 4:30 pm The regional Championship game is set for noon Sunday. It marks the first time CSB has hosted an NCAA postseason competition since a first-round basketball game in 2009 – a span of over 13 years.

“Hosting an NCAA tournament at our facility is something I have wanted to do since it was finished in the spring of 2018 and the day is finally here,” Bennies Coach Rachael Click said. “I am so thankful for the support of those who worked on our hosting bid and happy for our team that they get to continue their season at home. I am confident all of the teams, coaches and fans are going to have an excellent regional tournament experience at St. Ben’s. ”

For more information on the Bennies’ NCAA bid, visit the full story at gobennies.com. 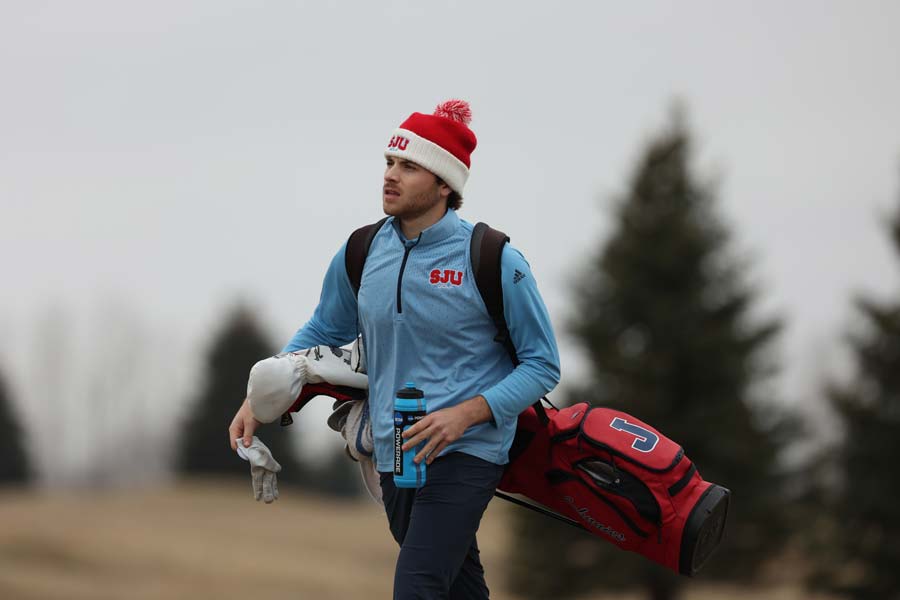 Meanwhile, the SJU golf team is making its 19thth appearance at the NCAA Division III national meet since 2000, and is hoping to improve on last season when the Johnnies finished tied for 15th out of 37 teams.

SJU – which earned the MIAC’s automatic bid to nationals by winning the conference tournament last October – enters the competition having competed only three times this spring because of the cold weather.

The Johnnies faced Gustavus in a dual meet on April 21, then played host to the SJU Winter Classic on April 23 in the Sauk Center and the SJU Spring Invitational on April 24 in Monticello.

Head Coach Michael Whitlock’s team finished first at the last two events. Sophomore Glavine Schugel recorded seven birdies and tied for second with a one-under-par score of 71 at the Winter Classic and Gutzmer shot a two-over-par 73 to tie for a third overall at the Spring Invitational.

Methodist will be among the teams SJU is playing with in the first two rounds.

“I think we have the potential to be a top five team,” Whitlock said. “We haven’t had the most favorable conditions to compete in this spring. But if we play as well as we’re capable of, I think we can compete with any team in the country. ”

For more information on the Johnnies at the national tournament, visit the full story at gojohnnies.com.