WEST LOOP — Is Chicago-based Spikeball primed to become the next big sport?

Daymon John, the founder of FUBU and Investor on ABC’s “Shark Tank,” thinks so.

Spikeball, which has grown from a local backyard toy to a national craze, appeared on the season finale of “Shark Tank” last week and scored one of the biggest deals in the show’s history.

“There’s enough evidence that you’ve got a bit of a viral thing going on,” Shark Investor Kevin O’Leary said during the episode.

That viral thing has exploded over the past two years to the point that Chris Ruder, the 39-year-old founder of the company, has dreams of taking the sport pro.

A few years ago Ruder was working full time for Live Nation, a national events company, and was selling Spikeball sets out of his Wicker Park house.

It was a part-time gig selling the backyard and beach game, but things started to pick up steam about a 1½ years ago.

“Once we hit that mark my wife and I agreed, ‘OK we think this is a safe enough thing where I can make the jump,'” he said. “I’ve got a wife and three kids so I needed to make sure we could eat.”

Paul Biasco played the sport once and says it’s taking off fast:

During 19 months since Ruder left Live Nation his company has grown to eight full-time employees and passed the 100,000 mark for nets sold. The basic model retails for $53.00 on Spikeball.com.

Considering it’s a four-player game, an extremely conservative estimate puts the total number of people who have played at roughly half a million.

Spikeball is a simple game to learn. It’s portable and can be played almost anywhere, which has led to its booming popularity.

If you live in Chicago you’ve likely seen groups playing either on the beach, in parks or even in some of Chicago schools’ PE classes.

The equipment for the game includes a small trampoline-like net and an inflatable ball.

Ruder best describes it as the love child of volleyball and four square.

A league popped up in Chicago, based at North Avenue Beach, two summers ago, but since then Ruder has launched a national network called USA Spikeball that includes tournaments, player rankings and more.

Last year there were 100 tournaments nationwide. This year he’s estimating there will be 300.

“We don’t want to be relegated to being this fun backyard game,” Ruder said. “I think if we were to do that we would risk becoming a fad. We want to introduce and foster competition.”

National Retailers have caught on.

Up until last year, Spikeball was sold primarily through the company’s own website.

In the Spring 2014 a representative from Dick’s Sporting Goods called Ruder and wanted in.

The kits are now sold in 850 Dick’s Nationwide and more Retailers are knocking.

“That’s absolutely unheard of,” Ruder said. “Dick’s Sporting Goods doesn’t call people. You beg and plead to get in there.”

The Next American Sport

The company has taken on the mission to create the next Great American Sport.

To do this Ruder has enlisted and empowered college students across the country to host their own tournaments through USASpikeball.com.

Membership on the platform is $25 annually and tournament organizers get to keep 75 percent of entry fees.

The method has led to Quads on college campuses across the country littered with bright yellow Spikeball nets. 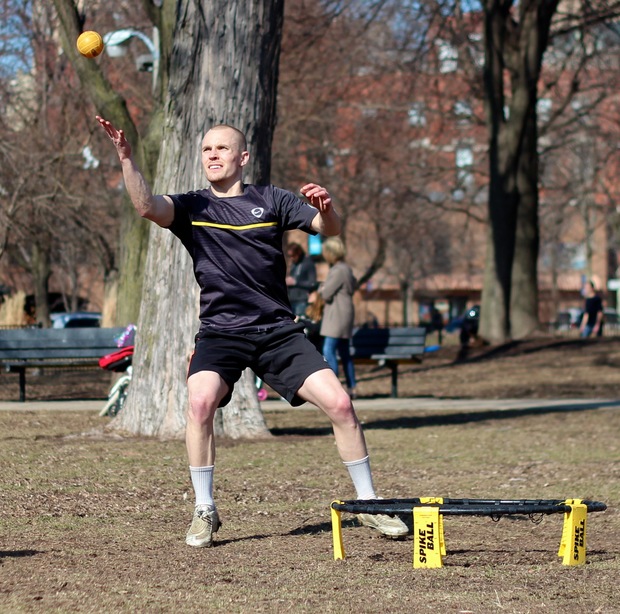 It’s a quick game that requires skill, agility, speed, coordination and teamwork. New players can pick up the game within 20 minutes, but the tough progression to high-level play means it’s not something players get sick of after a game or two or even a few years.

Part of the reason for the success is due to the feeling of belonging to a movement. The game has been viewed as a sort-of underground scene up until recently.

It’s a game that brings Strangers on the beach together and is exciting, active and weird-looking enough to draw the gawk of pretty much anyone within eyesight of the net.

The top team in the country, which also won the 2014 USA Spikeball Nation Championships in Santa Monica, Calif., has only lost once.

While the sport doesn’t have any ESPN and NBC Sports deals lined up, Ruder paid a crew to film the Finals and create an “NFL-quality” broadcast that has since aired on Comcast SportsNet channels in the Midwest, Bay Area and Seattle multiple times.

The company is currently developing a glow-in-the-dark kit to meet demands as well as a “pro” model that will be used in tournament play.

Spikeball turned to its players to help design the pro model through a crowdsourcing effect. That model is expected out by the holiday season.

“If we want to be taken seriously, we need to have some professional-grade equipment,” Ruder said. “We are still polishing up exactly what that means.”

All eight Spikeball employees, most of whom are in cities outside Chicago, were called into the West Loop Headquarters just before “Shark Tank” aired.

Ruder anticipated a rush of orders after the show, which was the final deal the Sharks saw this season during the finale.

“We’ve been buried,” Ruder said. “Whether it be retail partners, media outlets, equipment providers, sponsorships. We are still digging out.”

The team, Chico Spikeball, even played a set during Spikeball’s appearance on “Shark Tank.”

Both members of Chico were tennis players and started playing Spikeball about three years ago for fun.

They are both now full-time employees with Spikeball based in Los Angeles.

“It’s the kind of thing two or three years ago we were like ‘Wouldn’t it be crazy if …’ said Shaun Boyer, Spikeball’s 23-year-old social media manager. “Now we are in Chicago working for Spikeball and were just on ‘Shark Tank.’ It’s mind blowing how far we’ve come.” 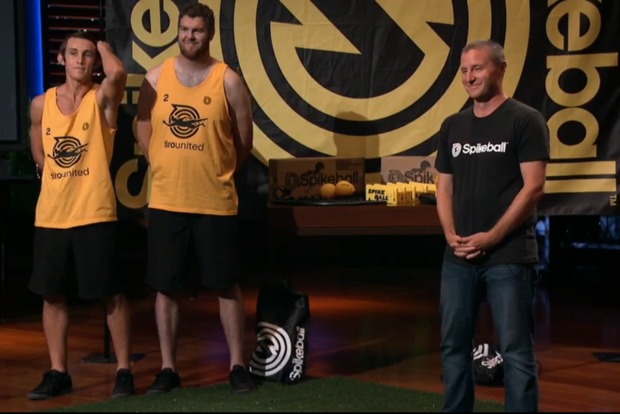 Spikeball didn’t have to go on “Shark Tank,” according to Ruder. The company was doing just fine, but the opportunity to showcase the game in front of millions of viewers was something he couldn’t pass up.

“Exposure is No. 1,” they said. “There were 6.9 million people on Friday night that saw Spikeball for 11½ minutes. Money cannot buy that.”

The pitch on the show, which was actually taped back in September, lasted about 40 minutes and was cut down for airtime.

“I didn’t tell any of my closest friends, most of the employees had no idea,” Ruder said. “When we got the deal this place just exploded.”

Spike in the Schools

One of the biggest areas of expansion for the company over the past year has been in grade schools across the country.

Spikeball’s team estimates there are sets in about 3,000 schools.

Skyler Boles, a 25-year-old member of Chico Spike, had plans to become a physical education teacher.

Boles, one of the top Spikeball players in the country, received his certificate to teach gym and was playing Spikeball almost every weekend when he had an epiphany.

The sets are relatively cheap for schools, Spikeball offers a lifetime warranty on all parts and the game is easy to learn for almost anyone.

Boles has written lesson plans for teachers to implement the game and he and Boyer regularly visit schools to teach instructors and demonstrate Spikeball.

An epic point was played out during a demonstration at a California school recently.

“We had 250 kids just screaming at the top of their lungs,” Boyer said. “Kids were asking for autographs after.”

Better yet, the schools where Spikeball is being taught have seen that some students who typically hang near the back of class and don’t participate have been jumping into the game because everyone starts from a clean slate.

“Win or lose a point, everybody is smiling,” Boles said.

Boles, who is the official Spikeball Ambassador for schools, has been focused in California, Texas, Illinois and on the East Coast.