CONWAY – Archery buffs throughout Arkansas are invited to take their shot at some of the most interesting targets and challenging situations offered in the bowhunting world at the R100 being held at the Camp Robinson Special Use Area archery ranges May 13-15. The archery ranges are at 331 Clinton Road in Conway.

The R100 is a special circuit that offers archers a rare opportunity to shoot at targets crafted after dozens of game animals found in North America and Africa. Two 50-target ranges will be set up (the Safari Range and North American Range). Featured among the game animals, archers will also find some unique targets, including giant mosquitoes, dinosaurs, sasquatch and other fun but nonexistent creatures. Archers looking to test their nerves as well as their skill may also want to attempt the steel forest challenge, where participants shoot at 3D white-tailed deer targets through a maze of steel trees that will destroy the arrow on an errant shot. Other specialty shoots will also be offered throughout the weekend to keep things interesting. A special kids zone will offer more fun targets for the young archers in attendance as well. Participants who wish to shoot a crossbow may also join for fun, but their scores will not be posted nor counted toward a ranking. 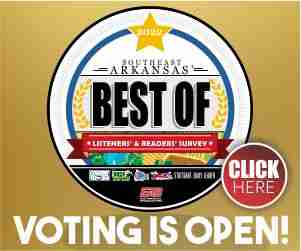 “This is a fun way for NBEF to engage with archers and get them interested in bowhunting,” Marilyn Bentz, NBEF Executive Director, said. “We appreciate that these events appeal to youth and adults. The unique targets and shooting situations really take these events to the next level. ”

Carrie Crawford, state coordinator for NBEF and administrative office coordinator for the AGFC in Little Rock, said the ranges will be available noon-dusk Friday, 7 am-dusk Saturday and 7 am-2 pm Sunday. Participants can come and shoot anytime the ranges are open during the three days.

“You can shoot the courses however you want,” Crawford said. “Some people shoot all 100 targets in one day, some split it up into multiple days, and some people just shoot one course and call it a day. There will be door prizes each day for people who shoot, and the top five archers in each class will be announced at an award presentation at 3 pm Sunday. ”

Crawford says the 3D archery tournament is a great way for hunters to stay in shooting shape throughout the year and get more enjoyment out of archery than bow season.

“Even if you’ve never hunted, it’s still a blast,” Crawford said. “Thousands of people have learned to shoot a bow through the AGFC’s Archery in the Schools program and Becoming an Outdoors-Woman program that may want to come out and continue their archery journey, and 3D targets are the perfect next step.”

Visit https://www.r100.org/shop/conway-ar for more information about the R100 and how to participate in this year’s event.