The Southwest end of Augustana University’s campus is almost unrecognizable — both inside and out.

Announced in Spring 2021 — as part of Augustana’s strategic plan Viking Bold: The Journey to 2030 — the university’s housing plan focused on new and enhanced facilities is nearly complete. The new south residential village has taken shape with the completion of a new residence hall, renovation of AJ Bergsaker Hall and construction of a newly imagined campus green. Changes to Charles Orin Solberg Hall — in the midst of a major facelift — will put the finishing touches on the plan.

Ralph H. Wagoner Hall and the Former President Behind the Name

Hosted by the Greater Sioux Falls Chamber of Commerce, the Augustana community gathered together at a ceremony on Friday, Sept. 23 to celebrate the ribbon cutting and Dedication of Ralph H. Wagoner Hall — named after Augustana’s 21st president.

When President Stephanie Herseth Sandlin informed Wagoner that his name was going to be on the building, Wagoner recalled, “I bawled like a baby. I didn’t know what to do.”

Taking a few seconds to control his emotions and collect his thoughts, Wagoner said, “I’m honored. Beyond words, I’m honored. I hope I deserve it.” 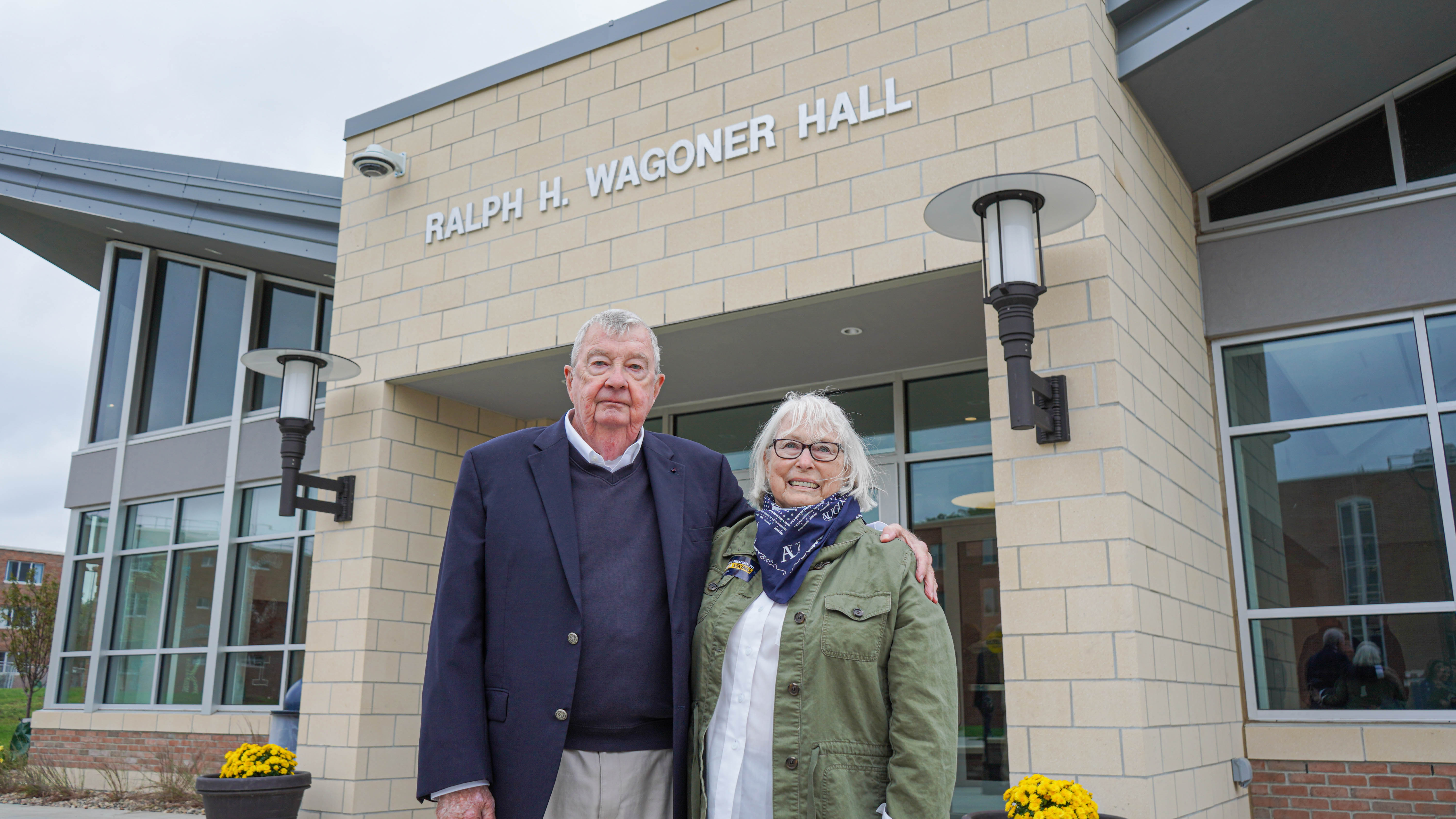 The man who coined the phrase, “It’s a great day to be a Viking,” said the faculty and staff worked hard to break down walls and build bridges between Augustana and the Sioux Falls community.

Under Wagoner’s leadership, the Center for Western Studies (CWS) Hosted the first Boe Forum on Public Affairs, Augustana constructed the Nelson Service Center, dedicated the Madsen Social Science Center and the Old Gymnasium was renovated into the Edith Mortenson Center. Augustana’s five shared core values ​​were also established by a committee of students, faculty and staff and approved by the Board of Trustees during his administration.

“That makes me feel good, the way they (the faculty) did it and took them to everybody,” said Wagoner. “They (the core values) really were put to the map, so to speak. And, I’m just so proud of those people, and so proud of the people that bought off on them.” 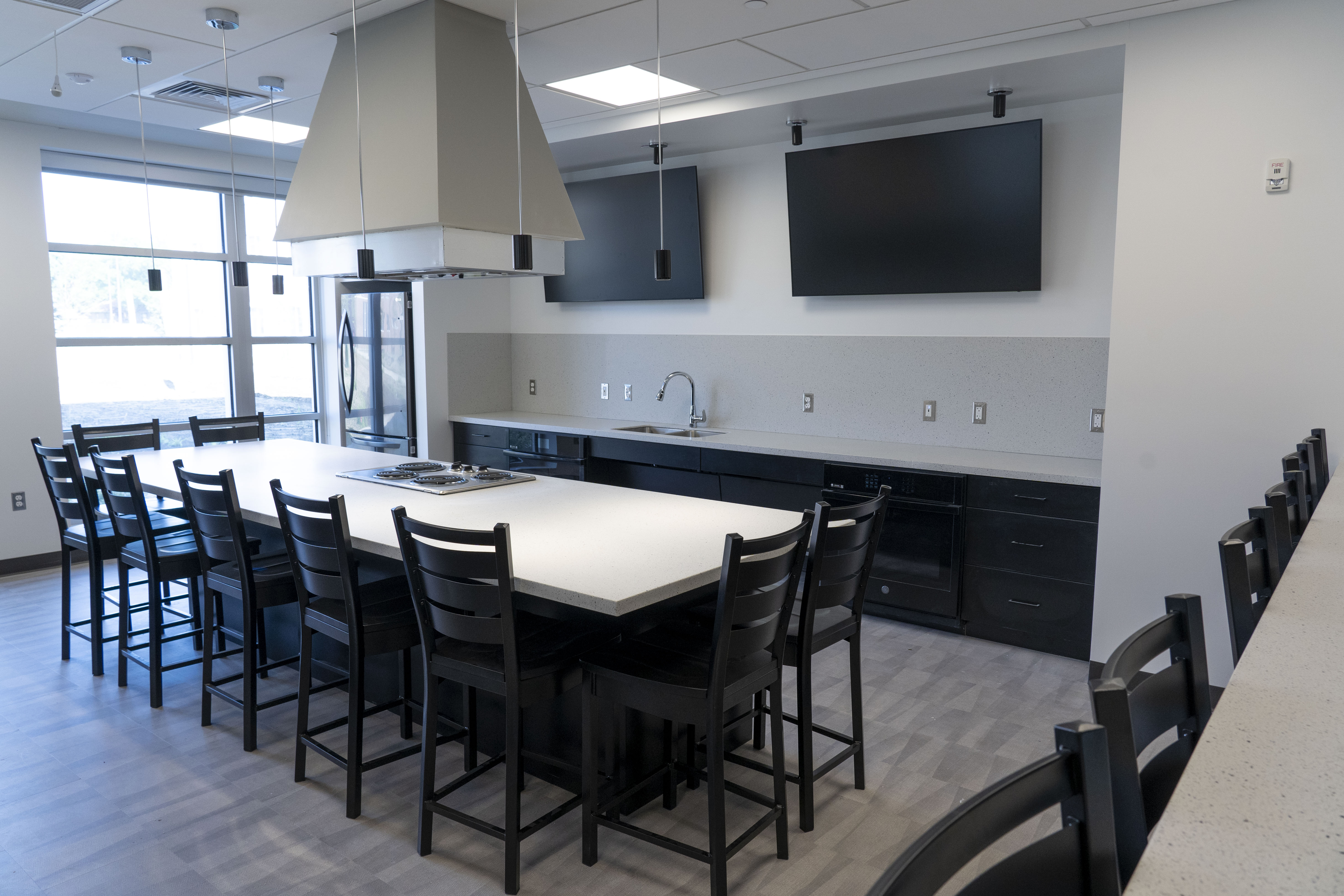 “I would hope when people think of ‘Wagoner,’ they think of the relevance she (Susie) had. She was always with me,” Wagoner said of his wife of 60 years. “She saved a number of kids she worked with in the Wellness Center, along with her colleagues.”

The Wagoners traveled from their home in Apalachicola, Florida, to get a first-hand look at the new facility that bears his name — a facility that incorporates both living and learning environments with opportunities to innovate, build community and facilitate inclusion.

The L-shaped residence hall — located north of Bergsaker and east of Solberg Halls — stands 3-stories tall with room for up to 208 beds.

Inside the front doors, the entire Augustana community has access to a lounge area with natural light flowing in through a wall of windows. Just a few steps ahead, to the left, is yet another wall of windows, which includes the main feature of the building — referred to as the “Jewel Box.” The Jewel Box is a multi-purpose space with integrated technology for students, faculty, staff and members of the community to host meetings, classes large and small, as well as cooking demonstrations with video-recording capabilities.

Past the Jewel Box, are bathrooms, vending machines, more lounge and study areas, the hall director’s apartment and office, meeting spaces for Augustana’s Resident advisors, known as Viking Advisors (VAs) at AU, as well as a break room for custodial staff . The first floor also has a meditation room at the request of students. 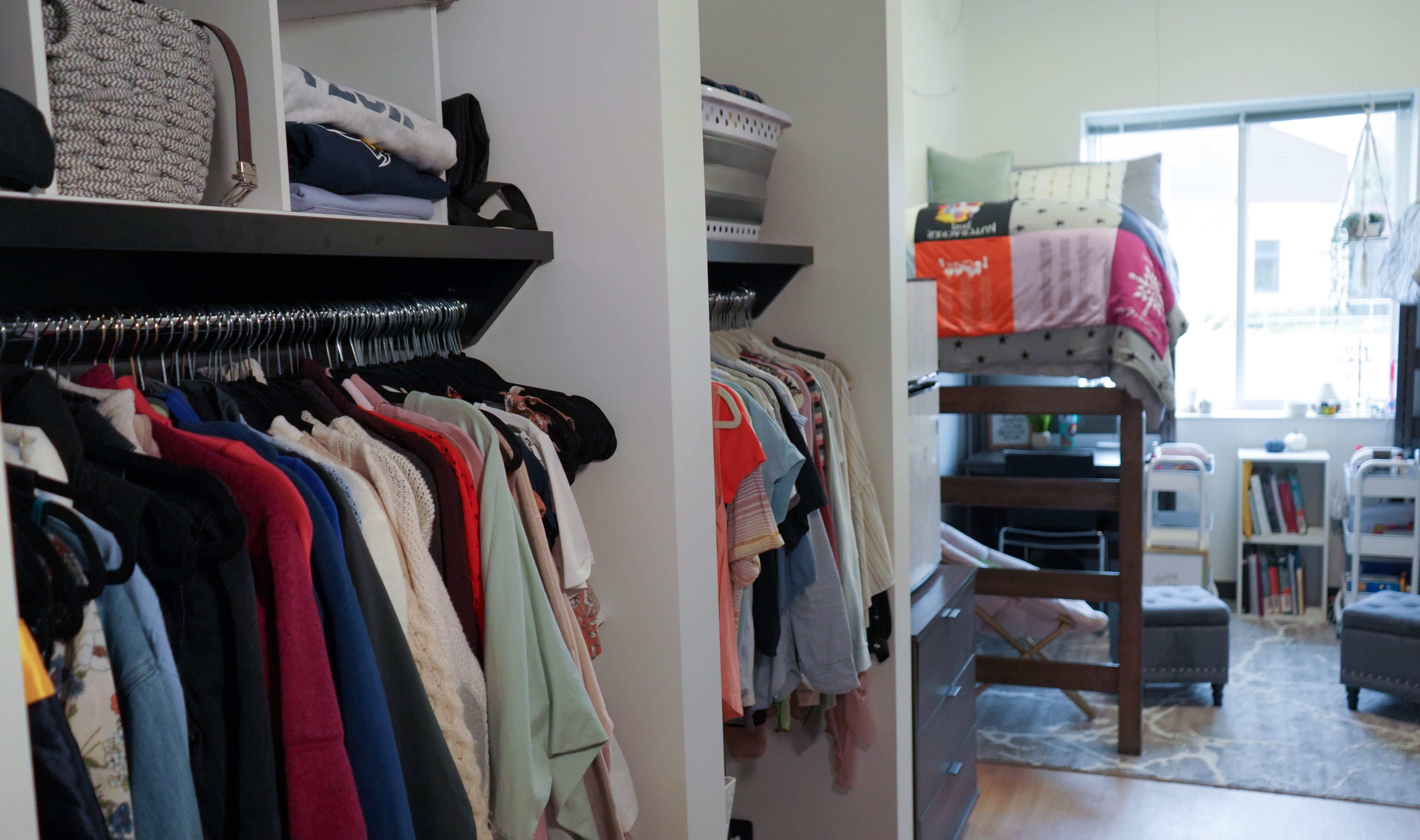 Beyond all of this is a secure entrance; only students living in Wagoner Hall have access to the elevator and living spaces on the first, second and third floors.

Listening to input from students as part of its housing study, Augustana got away from the more traditional-style housing that the university offers in other residence halls — incorporating semi-suites into the design. With the exception of ADA-compliant and single rooms for VAs, most of the units consist of four beds, a shared bathroom and their own heating and cooling units. Besides their living units, on each floor, students also have access to laundry rooms and more private lounge and study areas.

“Semi-suite style living is the hot ticket right now. That’s one piece of it, but also, we’re growing. If we truly double down on our mission-critical pieces of being a residential campus, we’ve got to practice what we preach. Living on campus in a residence hall is convenient, but also part of the whole experience of going to college,” said Dean of Students Mark Blackburn.

And, many of these rooms have a Spectacular view of the south residential village’s new courtyard, which includes an Intramural sand volleyball court and a space for hammocks.

While Wagoner Hall was being constructed, one of Augustana’s existing residence halls was offline — undergoing a massive renovation. 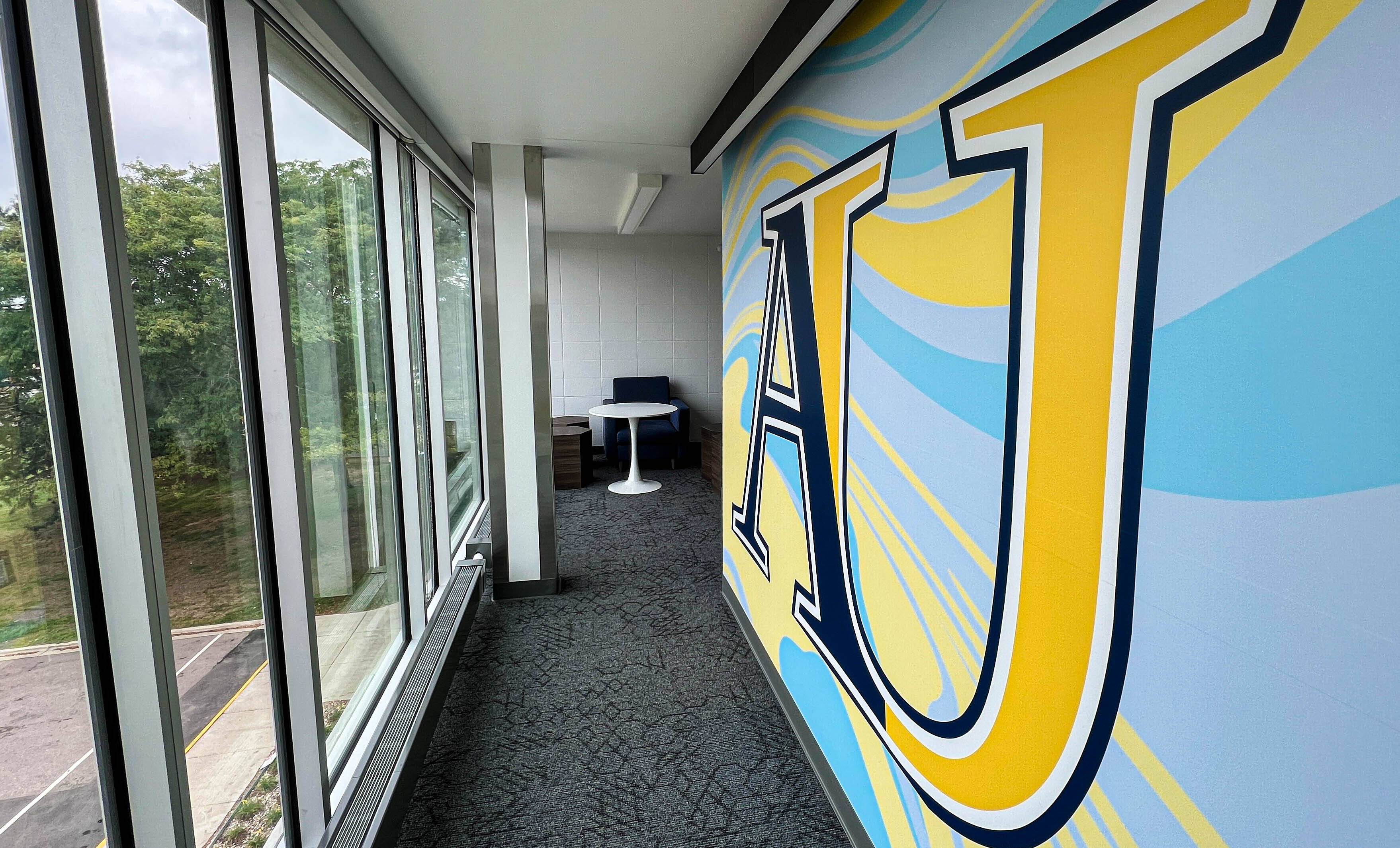 Most visible to the public, along 33rd Street, balconies were eliminated from Bergsaker Hall — replaced with four stories of windows. There’s no mistaking the campus from passersby as AU branding adorns the walls, which can be seen through the windows, especially at night. And, come Fall 2023, those windows will provide students with one of the most spectacular views on campus — a view of Midco Arena, home of Viking Men’s Hockey.

Inside, not much in Bergsaker was untouched. The hall was reconfigured, but still houses the same number of beds as before — 240 in total. The bathrooms were also reconfigured and updated on each floor. The lobby received fresh new finishes and includes a kitchen, lounge area and laundry nearby. Moving in and out of the hall is substantially easier now that an elevator has been installed, improving accessibility and Lofts are more easily adjustable. 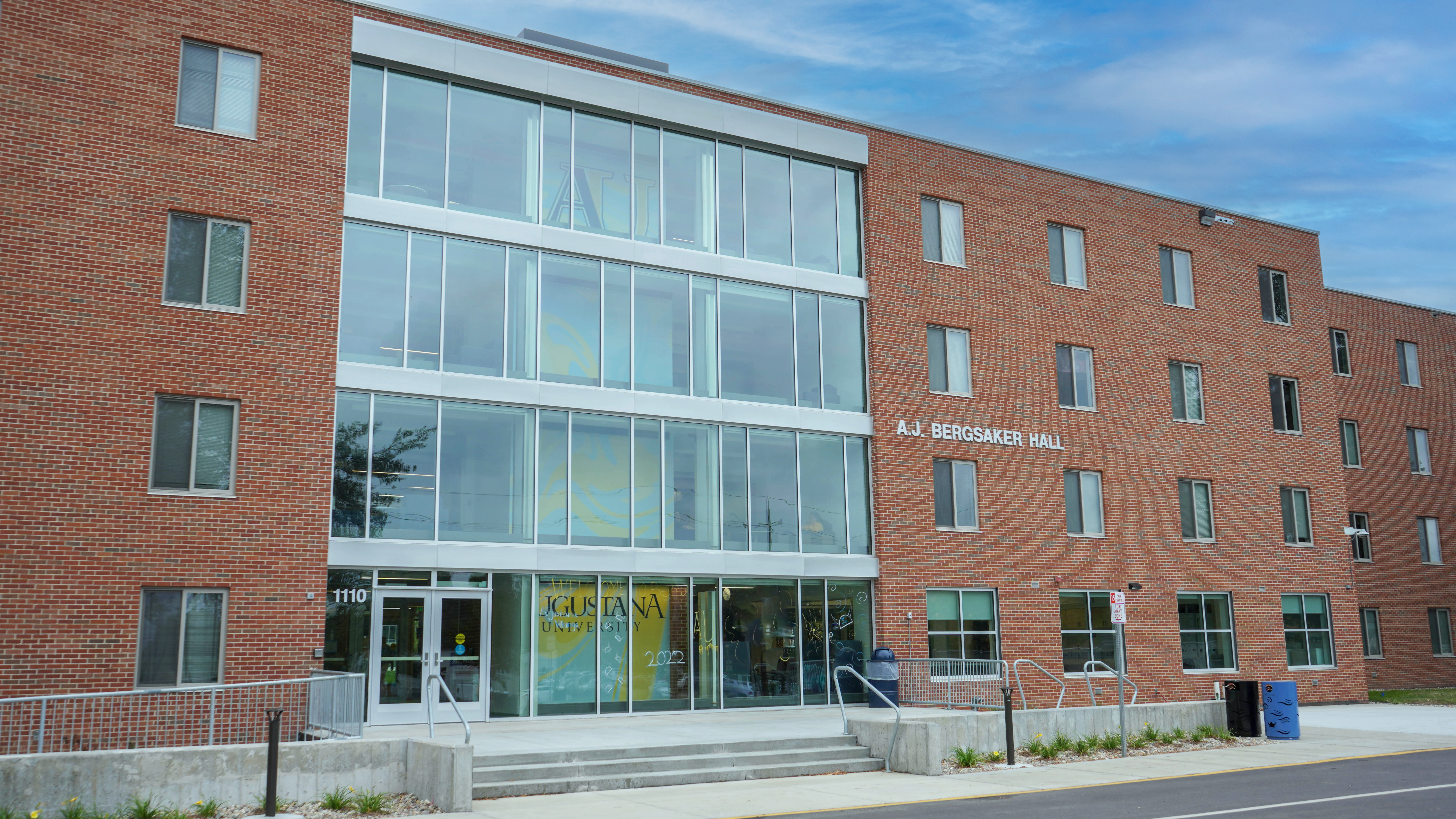 When Augustana student Liz Fossum ’23 was asked about the changes to “Berg,” her first words were “jaw-dropping.”

“It looks like a completely different building with the upgrades. It looks so modern, super nice,” said Liz of the place she lived in her first year at the university; the same hall that her father, Scott Fossum ’88, lived in as a Resident Advisor 30+ years prior.

And, it didn’t take long for the Mitchell, South Dakota, native to discover her favorite part.

“The laundry room,” said the communications and international studies double major. “It’s such an essential part of college life — just getting a larger number of washers and dryers for students to use — that’ll be a huge step for the community that’s living there now.” 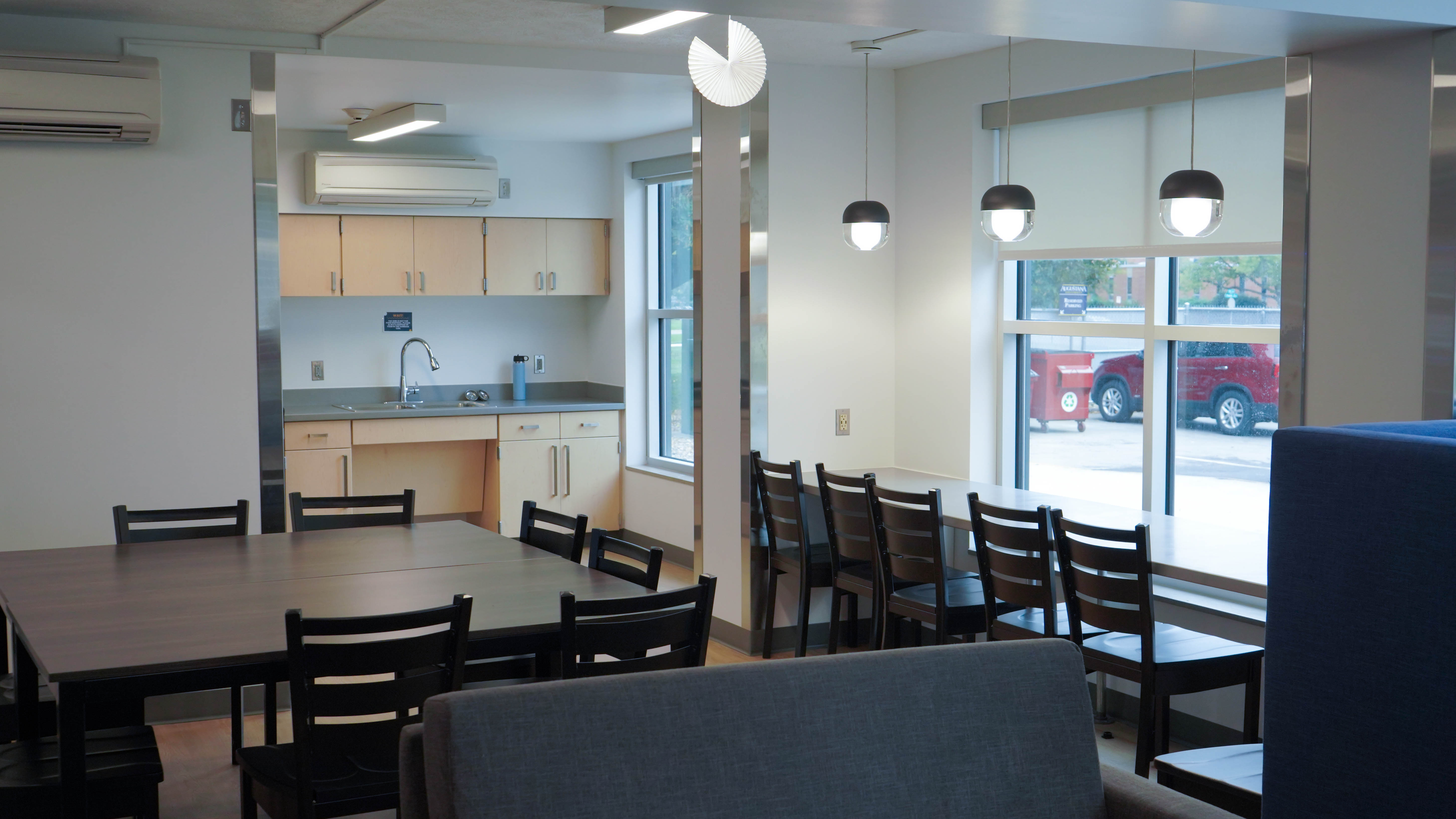 Augustana kept with the more traditional-style units in Bergsaker, with bathrooms separate from the living units. Each room now has its own heating and cooling systems and each floor has lounges and spaces for studying with integrated technology in them.

The last to receive renovations is Solberg Hall, which originally opened in 1955. The hall is offline and receiving much of the same treatment as Bergsaker Hall — set to open in Fall 2023.

As an Augustana cultural exchange (ACE) Ambassador to international students and a student Ambassador for the Office of Admission, Fossum can’t wait to show prospective students what Augustana has to offer.

“I feel like most students come here because they feel the community on campus and that personal support,” said Fossum. “But in the long run, for a student deciding between two places, it’s just an extra bonus.”

Augustana is also making Improvements to the east of the south residential village with a reimagined campus green — set to be completed in Fall 2023. 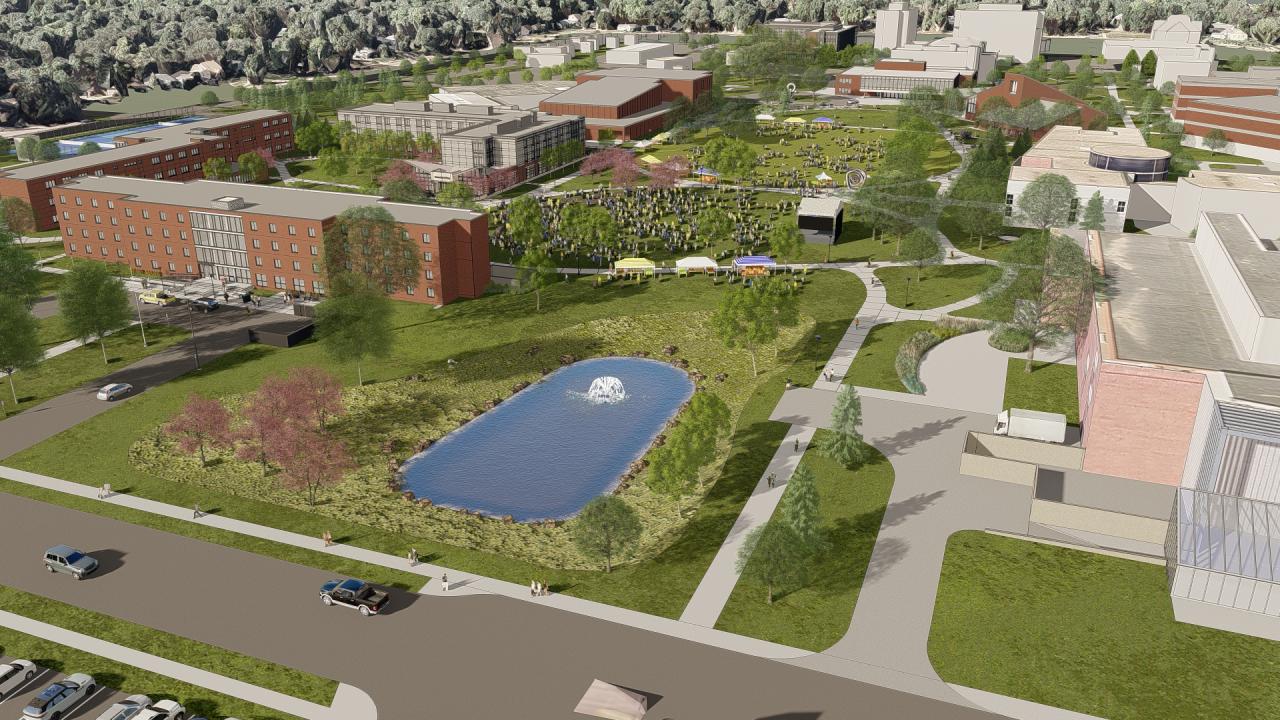 The “green,” located in the center of campus, is undergoing renovations to include a 100-yard football field with lights, seating areas with charging stations, an additional outdoor classroom with amphitheater-style seating and a water feature.

The renovated green also has designated spaces for intramural sports, such as flag football, frisbee golf, softball and spikeball.

“Our Intramural program and sport clubs have been without an outdoor play space for years, so we are very excited to see the field in the campus green be part of the renovation project,” said Director of Recreational (Rec) Services Mark Hecht. “As exciting as the space is for our flag football program and sport clubs, it’s even more exciting that this area will have lights.” 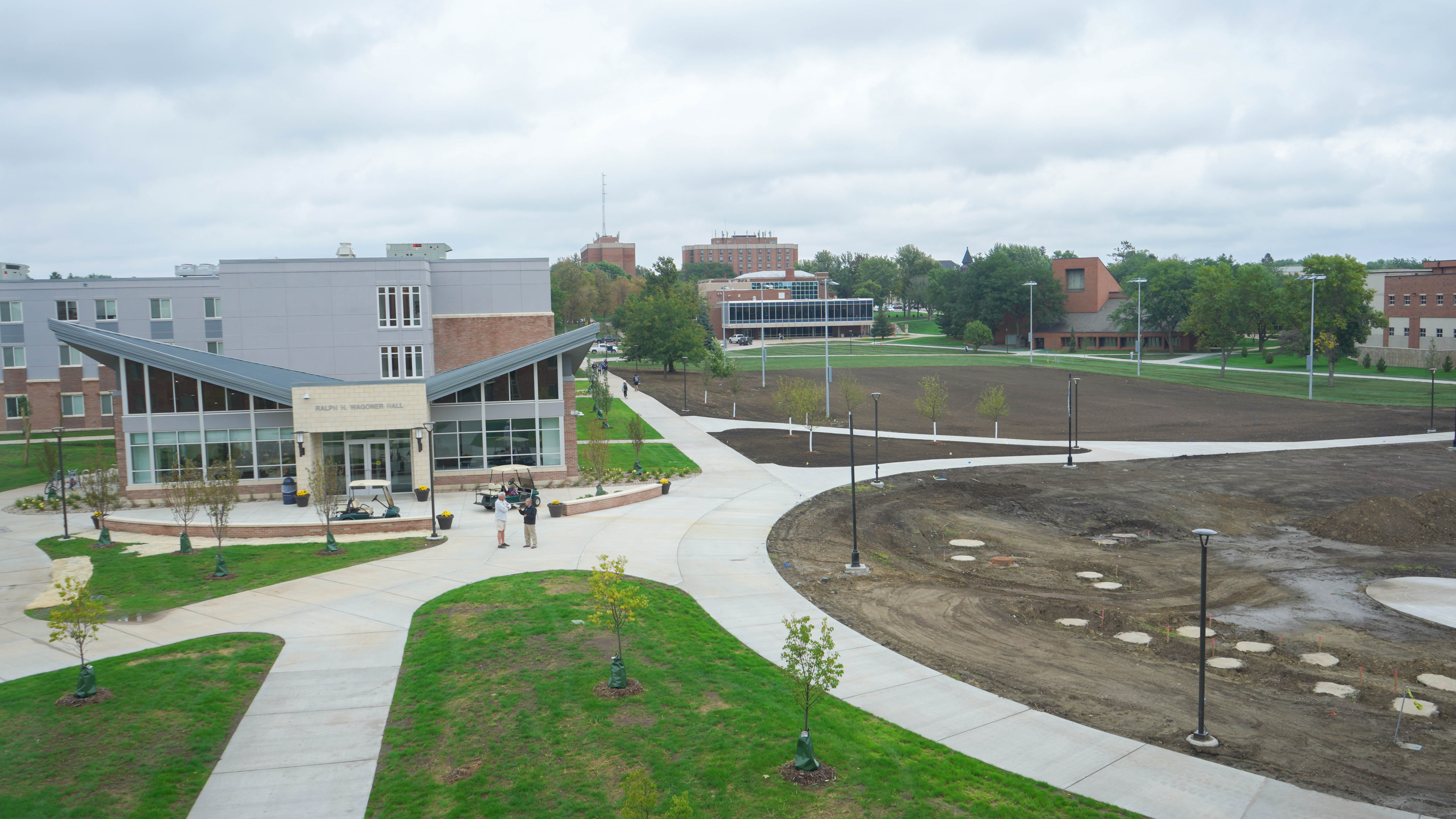 An outdoor Classroom on the south end of the green will be Augustana’s second — the first was built in 2019, and is located by the Madsen Center. The original has since inspired area school districts to build similar classrooms.

“I’m a big fan of ‘influencing the influencer’ because that’s when change happens,” Blackburn said. “It’s also about Sustainability and flexibility. If Faculty want to utilize the outdoor classroom, but the one by the Madsen Center is full, it’s another space.”

To prevent flooding, a retention pond on campus was relocated closer to Bergsaker Hall along 33rd Street and includes a water feature. The sidewalks that run alongside and between the green and academic buildings were also reconstructed.

The renovated green is in the process of receiving sod, which is why it can’t be utilized until the spring, as the root systems need time to develop.

Regardless of when, Blackburn can’t wait for students to utilize it.

“Just to see the smiles on students’ faces as they gather with one another and share ideas, and they’ll have a larger space for special events and activities — that’s what I’m most excited for,” Blackburn said.

“It just shows that they (the administration) listened to the student body when they were talking about what we needed here on campus. That’s huge, just to know that our Voices are heard,” said Fossum. “They’re investing in our students and the future.”