One day each week, members of The Wolfpack archery team practice at the Koteewi Range at Strawtown Koteewi Park in Noblesville. Whether at the facility’s indoor or outdoor ranges, the young archers learn more than just archery skills at practice.

Tony Girt, 55, coaches the Wolfpack archery team. He teaches archery skills and life skills such as communication and time management.

A native of Anderson, Girt was first introduced to archery by his brother and brother-in-law as a 14-year-old.

“It was basically hunting back then,” Girt said. “We spent all summer long competing at tournaments to better our skills and prepare us for hunting.”

Girt was in his mid-20s when he opened his own archery shop. He has been coaching archery for 15 years. 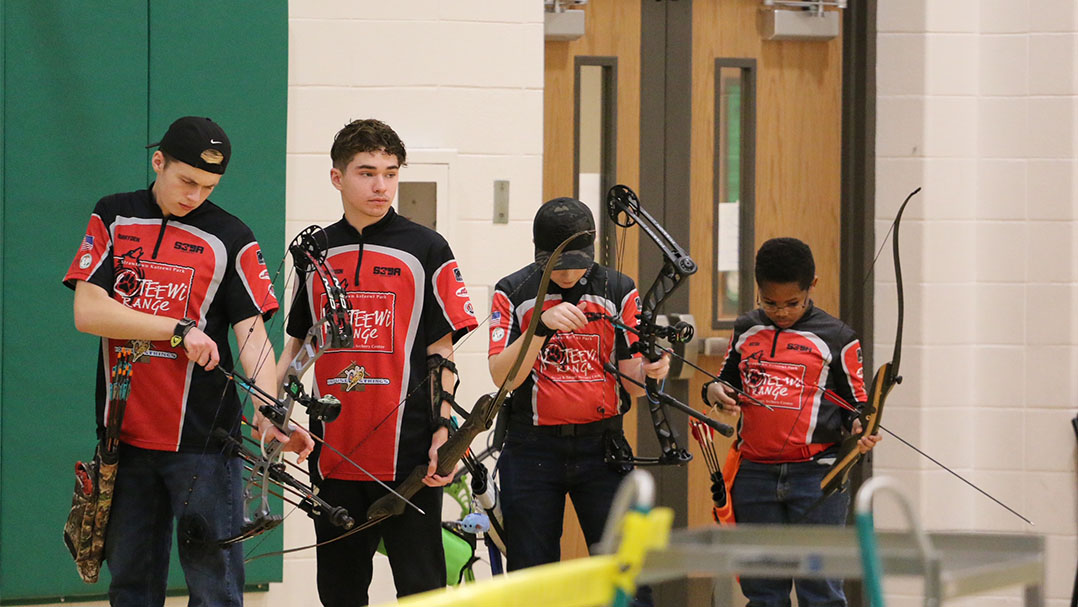 Ranging from 10 to 17 years old, members of the Wolfpack archery team have different archery skills. Cheyenne Boggs, 15, was introduced to archery when she was in third grade and has been on the team ever since.

“I used to be super shy and wouldn’t talk to anyone,” said Boggs, a freshman at Hamilton Heights High School. “That’s definitely not the case anymore.”

Wolfpack team members compete at local and national levels and have to learn time-management skills when traveling for competitions.

“I’m still doing my math homework during tournaments,” Boggs said. “It can be stressful.”

Fishers High School senior Druin McGill, 17, signed up for six weeks of lessons with Girt. Her goal was to find a new hobby and learn new skills.

“I didn’t even see it as a competitive sport at the time,” McGill said. “I shot a few arrows during my time in 4-H and with Boy Scouts, so that’s what gave me the interest to try the lessons.”

McGill is the oldest member of the Wolfpack and has watched the archery program grow.

“It’s been really rewarding seeing the new members come in and see the experiences they have and all that they have learned as well,” McGill said.

“Our team shows a lot of respect for other teams. We are always cheering on our competitors as well as our own teammates, ”Girt said.

Strawtown Koteewi Park is owned and operated by the Hamilton County Parks and Recreation Dept. The county began acquiring the now 800-plus acres of land in Noblesville in 1999. One of the original visions was for the park to have a state-of-the-art archery facility.

“I was at an indoor state tournament competing probably 10 years ago, and I happened to see a guy sitting over in the corner with a drawing of what they had in mind (for the park),” said Tony Girt, who coaches the Wolfpack archery team.

The man that Girt met was Al Patterson, at the time he was director of the Hamilton County Parks and Recreation Dept.

“That’s how it all started,” said Girt, who calls the archery facility world class.

The Koteewi Sport & Target Archery Center annually hosts several state and national-level tournaments, including for the International Bowhunter’s Organization and Archery Shooter’s Association, among others. Ranges are open to the public, and the facility has a pro shop.