Get the latest Syracuse news delivered right to your inbox. Subscribe to our sports newsletter here.

With three minutes left in the 2017 National Championship, Boston College’s Kenzie Kent pressured Maryland’s Nadine Hadnagy. As Hadnagy launched a deep pass, Kent checked her stick, secured the ground ball and darted towards the 12-meter. She passed to a trailing Sam Apuzzo for the easy finish.

Despite the eventual title-game defeat, Kent’s 10 points tied a career high. Just three months earlier, Kent had led all scorers with a season-high three points for the Eagles’ ice hockey team in a 6-0 NCAA quarterfinal win over St. Louis. Lawrence to send BC to its seventh Frozen Four appearance.

From 2014-19, Kent, now an assistant coach for the Syracuse women’s lacrosse program, starred as a dual athlete at Boston College, reaching a combined five Final Fours across the two sports. In 2017, she was named the Atlantic Coast Conference’s Female Athlete of the Year and ranks No. 4 and No. 10 in all-time career points in BC lacrosse and hockey, respectively.

“A lot of people say it’s the same but the stick is in the air, and I think she definitely used that to her advantage,” said Katie Crowley, Boston College’s women’s ice hockey head coach. “It was so similar to watching her play lacrosse and play hockey.”

Kent said that originally, she thought she was only going to play lacrosse in college, until she started hitting her “peak” in hockey as a sophomore in high school.

During her recruitment process, Kent looked at other schools like North Carolina to only play lacrosse, Crowley said. Kent said she struggled to make a decision, but the ability to play both sports at Boston College was a key factor in her decision.

“The draw for us to kind of try to get her to BC was that she would be able to play both sports,” Crowley said. “It was definitely doable. We wanted her to play both. ” 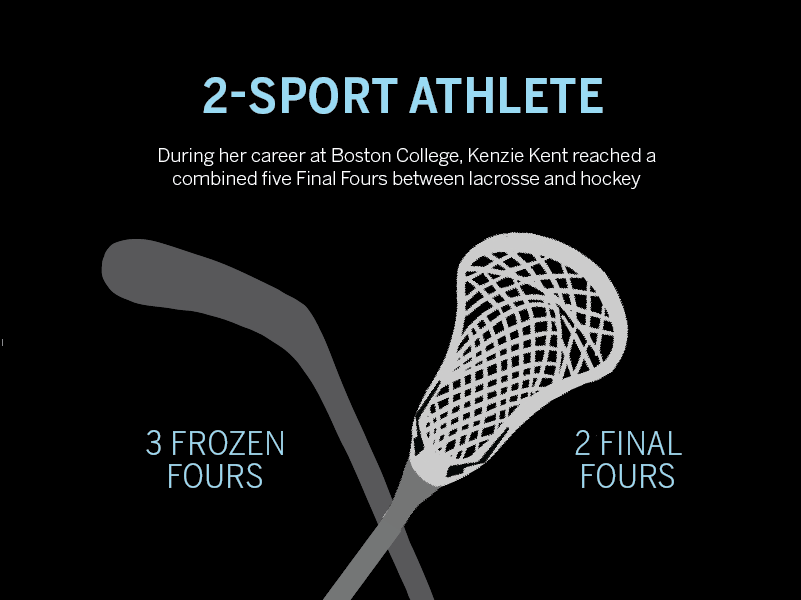 Because the end of the hockey season overlaps with the first month of the lacrosse season, Kent missed several lacrosse games each year. In 2018, she redshirted the entire lacrosse season so she could play a full season the following year.

Though she played two sports, Boston College had to abide by the NCAA’s rule of not allowing players to participate in athletic activities for over 20 hours a week. Kent didn’t physically practice with the lacrosse team, instead just spectating to get an understanding of certain plays and motions.

Kent was also required to take a day off each week in college, she said. In high school, she had some commitment to at least one sport every day of the week. Kent had a simple mindset on it – thinking to herself that she was “in-season” the whole year. 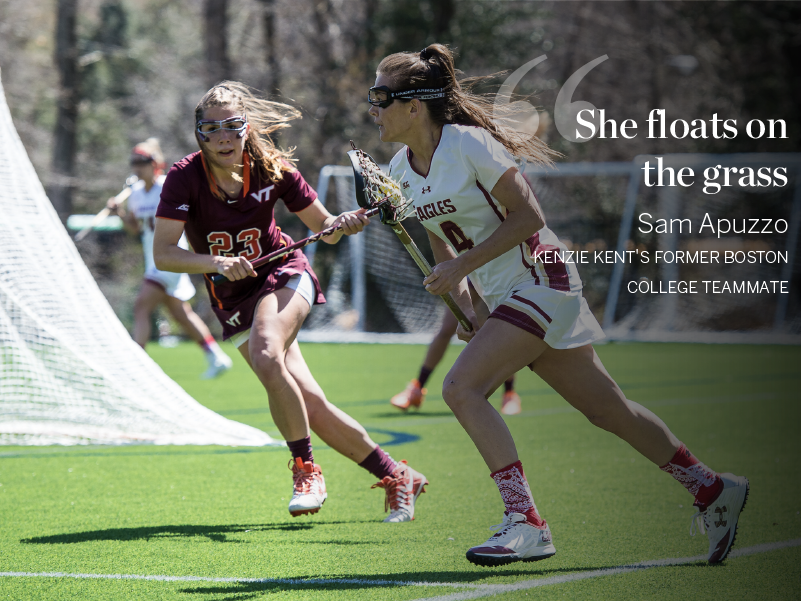 On the ice, Kent helped facilitate one of the best lines in the country, featuring Olympians Alex Carpenter and Haley Skarupa. Kent set Carpenter up with great goal-scoring opportunities because of her “elite” vision, Crowley said. In 2015-16, the trio led the Eagles to a 40-1 record with their only loss coming in the National Championship to Minnesota, and the second-place finish was the best in program history.

“It definitely took a special kind of player to mesh with them and she was that playmaker on that line,” said Makenna Newkirk, Kent’s hockey teammate at Boston College.

Kent was also an integral part of the power-play and penalty-killing units. Defensively, Newkirk said Kent had an “innate ability” to intercept passes because she could see her opponent play developing before it occurred.

To open scoring in a 6-0 onslaught against St. Lawrence in the quarterfinals, Newkirk skated down the right side of the ice before launching a cross-ice pass. Kent received it just in front of the goal, slipping the puck into the left side of the goal on the power play. And on the last goal against the Saints, Kent threaded a pass between two defenders to Newkirk, who received the puck with just enough space to deke the goalie, faking right to shoot left.

“She can always read her teammates and I think that was one of her gifts both on the field and on the ice,” Newkirk said.

Once the hockey season ended, Kent immediately jumped into lacrosse, taking no more than a couple days off. Physically, the transition was pretty easy, but the toughest part was adjusting mentally and emotionally to the new culture, Kent said.

Kent said Crowley was more laid back and let the team just play since the sport is back and forth, but BC women’s lacrosse head coach Acacia Walker-Weinstein had more strategy involved with set motions and offenses. 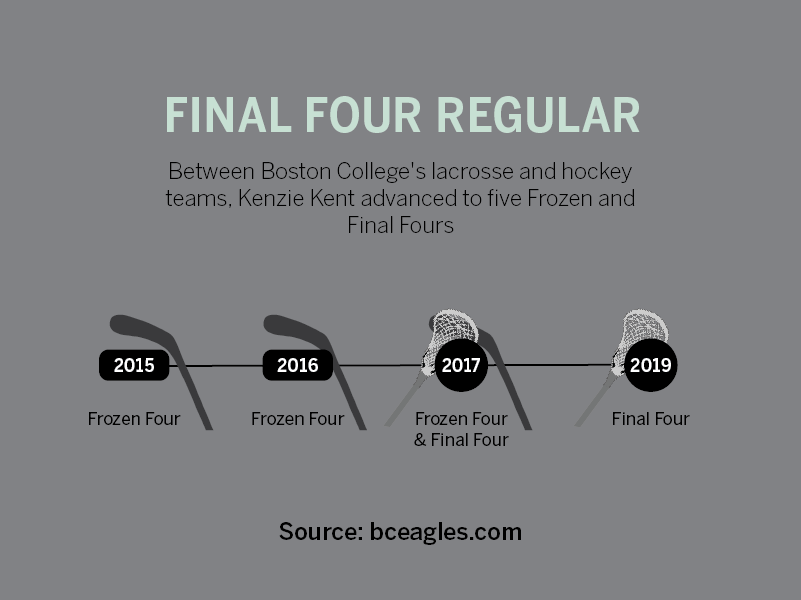 On the field, Kent had similar traits to what she displayed on the ice, especially with the ability to read the field and find fellow attacks for goal-scoring opportunities, Crowley said. She added that she thinks Kent dished out the puck more on the ice. Apuzzo said she thinks Kent looks like she’s skating when she’s on the lacrosse field.

“She floats on the grass,” Apuzzo said.

During her first three years on the lacrosse team, she never played more than 12 games because the hockey season stretched well into the postseason. However, after redshirting as a senior in 2018, she played just lacrosse in her graduate year. Despite not seeing any action in over a year, Kent looked the same as she was before, Apuzzo said. Kent was named an Intercollegiate Women’s Lacrosse Coaches Association first-team All-American and made the Final Four.

After graduating, Kent stuck with lacrosse, becoming an assistant coach with the Harvard women’s team before being hired by head coach Kayla Treanor and Syracuse this past offseason.