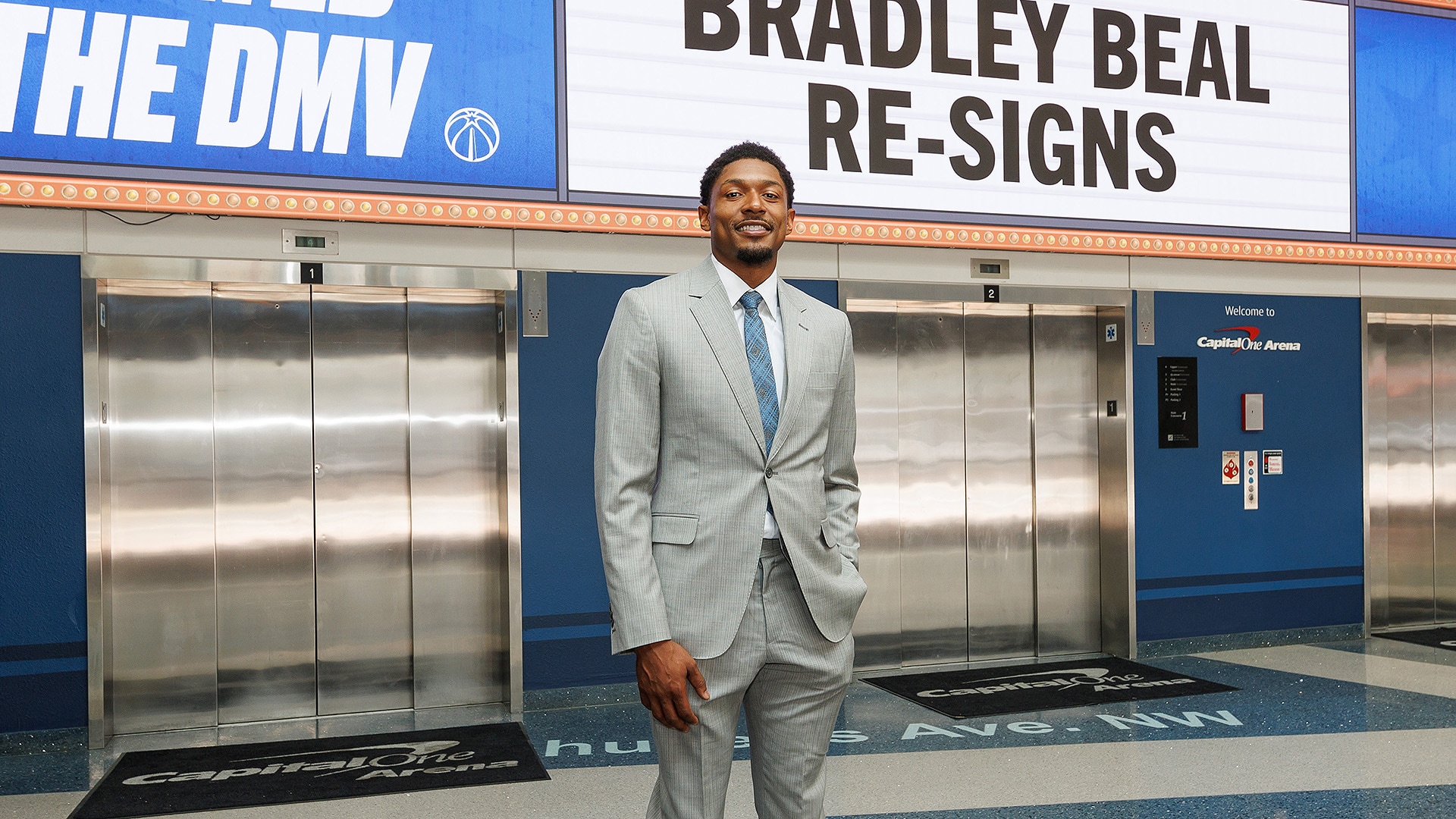 Keeping Bradley Beal in DC was a top priority for the Wizards in the offseason.

Last season: A spring swoon Secured the Wizards’ plunge to the Draft Lottery as the club couldn’t overcome a season-ending wrist injury to Bradley Beal and once again received mixed results from the meat of the rotation. They did execute a my-problem-for-your-problem midseason trade with the Dallas Mavericks, though, ridding themselves of Spencer Dinwiddie and Davis Bertans. Both were massive disappointments in Washington and they were traded for former All-Star big man Kristaps Porzingis. The Latvian did perform well in 17 games with Washington, averaging 22.1 points and 8.8 rebounds while shooting 36.7% on 3-pointers. But, Washington couldn’t even make the Play-In Tournament and, once again, entered the offseason searching for answers.

Summer summary: Beal got how much? And a no-trade clause, too? That essentially was the oh-my-gosh reaction regarding the Wizards and their offseason. They handed Beal a max contract — a reported five years, $251 million — rich for a player who has never gone beyond the Eastern Conference semifinals (and the last time that happened was five seasons ago), has just three All-Star Appearances and one All-NBA Third Team appearance to his name.

Beal is one of the best players in franchise history, a lethal scorer and decent defender who has spent his entire 10-year career with Washington. He’s 29, seemingly right in his prime, and averaged 30.5 ppg in 2019-20 and 31.3 ppg in 2020-21. Last season, he dipped to 23.2 ppg, but, to be fair, he dealt with a wrist injury that required surgery and held him to a half-season of action.

That said, Beal is paid like a superstar… but he isn’t one. A superstar brings more than just one skill, sells out the arena nightly, and is capable of taking a team deep into the postseason — think Giannis Antetokounmpo, LeBron James, Stephen Curry, Kevin Durant — and there are only a handful of those in the NBA. Wizards fans might hold that against Beal, although you certainly can’t fault him for taking what was offered.

With Beal, the Wizards Somehow can’t avoid falling into no-man’s land. By definition, it means being good enough to flirt with the idea of ​​making the Playoffs and possibly winning a round, but bad enough to select in the lower Lottery or mid-first round of the Draft … and therefore just miss the chance to nab an excellent prospect.

So what happens this time? The treadmill continued for the Wizards in the 2022 draft. They had the No. 10 pick, far too late for top prospects and potential franchise-changers like Paolo Banchero, Chet Holmgren or Jaden Ivey. The Wizards took Davis, a shooting guard from Wisconsin, and hope he can be the club’s best Draft pick in years…perhaps since they took Beal at No. 3 in 2012.

Of course, great players have been chosen with those kinds of picks (Antetokounmpo went 15th, after all), but the probability of getting one is reduced. Plus, the Wizards haven’t drafted an eventual All-Star since Beal in 2012. Since then, only Porter was decent. In some ways, it’s almost like Davis is behind the eight-ball even before he suits up.

Davis was an outstanding high school quarterback in addition to being Mr. Basketball in Wisconsin as a high school senior. He’s 6-foot-4, was the Big Ten’s Player of the Year last season and averaged 19.7 ppg, but also shot just 32.5% on 3-pointers in his college career.

Wizards GM Tommy Sheppard swung a solid deal to add some flexibility in the lineup by getting Barton and Morris from the Nuggets. Those two were very good starters for Denver and so it was a mild surprise that they were available. Morris averaged a career-best 12.6 ppg and 4.4 apg as a capable combo guard in Denver and filled in admirably for Jamal Murray (knee) as he missed all of 2021-22. He could stabilize Washington’s point guard situation for the first time since John Wall was around.

The key for Washington, however, is Barton. He’s a bouncy swingman who averaged 14.7 ppg, 4.8 rpg and 3.9 apg last season and was the best player in the deal that sent Caldwell-Pope and the journeyman Smith to Denver. Barton is streaky, but when he’s hot, he can be a solid No. 2 options.

Overall, it was a busy summer in the Capitol. But the biggest news — signing the club’s best player to a long-term extension — received a mixed reaction from the fan base, an event that normally gets universal applause.

Shaun Powell has covered the NBA for more than 25 years. You can e-mail him here, find his Archive here and follow him on Twitter.

The views on this page do not necessarily reflect the views of the NBA, its Clubs or Turner Broadcasting.